Vanessa Hua spoke about her novel, “Forbidden City,” researching the Cultural Revolution and the gaps in history that fiction helps fill.

Author and journalist Vanessa Hua spoke to NextShark about her forthcoming third novel, “Forbidden City,” researching the Cultural Revolution and the gaps in history that fiction helps to fill.

“I was watching a documentary about China, and suddenly this photo flashes on screen, and it’s Chairman Mao surrounded by giggling teenage girls wearing tight sweaters and plaid,” she said. “I was just astonished.”

She immediately wanted to learn more about these young women.

“It turned out Mao was a fan of ballroom dancing, and he had a troupe of young women he partnered with on the dance floor – and in the bedroom,” she said. “When I tried to find more information, I found a memoir by his physician, and he said something along the lines of ‘for these women, it was exhilarating, and the highest honor of their lives.’ And that was kind of like, end of story. And I knew it had to be more complicated than that.”

Hua’s protagonist in “Forbidden City,” Mei, was born from this initial spark.

“I wanted to make sure that even when you have someone in the grip of a belief system that they’ve been raised in this whole time, or when there’s patriarchy in traditional beliefs, there is space for agency in the way Mei thinks, how she acts, how she maneuvers. I wanted to honor that.”

“Forbidden City” is Hua’s third novel to be published, but it was the first she ever completed. She began writing the book in 2007, nearly a decade before the publication of her 2016 novel “Deceit and Other Possibilities” and “A River of Stars” (2018), which won her accolades, including an Asian/Pacific American Award in Literature. Both novels focused mostly on Asian American diasporic and immigrant experiences, so “Forbidden City” was a departure.

In our conversation, she notes that she has been working on “Forbidden City” for almost a third of her life.

“I finished one iteration of the book in 2009, which also happened to be when e-books were starting to be on the rise, and it was a difficult time in the publishing industry. It was the start of the recession – all of these things that I didn’t understand had any bearing, but did. It came close to selling but didn’t – but close only counts in horseshoes and hand grenades.”

Instead, she focused on other projects for more than a decade, although she never forgot about her initial novel. She published her first two novels and worked on nonfiction pieces as well – she is currently a columnist for the San Francisco Chronicle. Through her reporting, she has worked in Southern China and saw parallels between contemporary issues and the time period she wanted to write about in “Forbidden City.”

“Going into the villages or interviewing the young women who went into the factories, I saw a common thread between them and Mei, my main character, in that they were women who wanted a bigger, broader life, so they left home.” 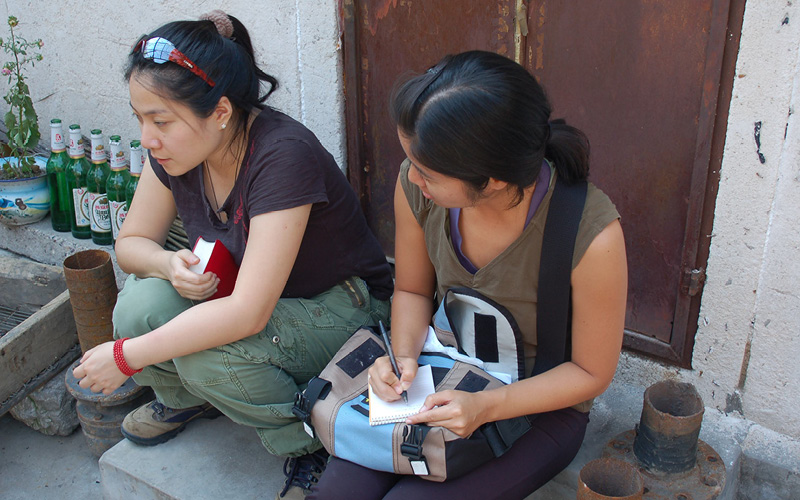 A Western audience, Hua said, might mostly conceptualize the Cultural Revolution through a limited lens, without the complexity of seeing individual stories and hearing the voices of those who experienced it.

“They might think ‘Oh, teenagers waving red books,’” she said. “They think of it as images. They don’t know about the causes.”

In fact, she says, there is a lot that Americans can take away from the history of the Cultural Revolution.

“Things like the Red Guard, or demagoguery, or all [this] upheaval that happened in China – how does that also understand our own systems in our own country too, and how things can spiral.”

One moment she recalls that highlighted that parallel happened while she was conducting research in China when she saw a group of American Boy Scouts on the train.

“They had the little red scarves on, and they were reading aloud from the little red book, because it was sort of a big joke to them, and I thought, well, do they really think they’re so different?”

An “empathetic leap of imagination”

Hua feels that fiction can be a bridge for her audience to think more deeply about these connections.

“I hope the novel faithfully depicts that era but also leaves readers the chance to reflect on what’s going on in their own era.”

Since the initial concept for the book, she said, lots of changes in our world have really deepened her understanding of the links between the past and present: the Me Too movement, the pandemic, the 2016 election.

Her research helped her build the world to place Mei in, but ultimately, she says, fiction takes an “empathetic leap of imagination” to come to fruition.

“Doing all you can to fill it in, but taking that empathetic leap of imagination,” she said. “Whenever the official record ends, that’s where fiction flourishes.”

One particular scene in the novel relies on a distinct setting. Hua worked for a long time on that scene without ever having visited, referring to maps and photos she found online. Eventually, she was able to get a research grant and visit the exact location for the first time.

“I went to that spot, and I looked. It was kind of eerie, because it was as I imagined it, as I had pieced it together. That I got it right. Fiction can sometimes feel like you willed something into being, because you imagined it.”

Forbidden City will be published in April 2022 and is available for pre-order.