What is ‘UwU’ and Why Do People Keep Saying It?

Memes are hard. Not only are we struggling as a society to understand where these staples of internet irony source from, half the time we’re not sure what they mean in the first place.

Not to worry. NextShark has you covered today on a particularly viral meme — one that sources from anime fixations and kawaii energy. We’re referring, of course, to “uwu,” which is…an emoticon? A noise? Both?

Everything about “uwu” seems to be up for debate, from its exact definition to its origins. According to Know Your Meme, the exact beginnings of uwu have not been sourced, but its use as an emoticon can be traced to fanfiction from as early as 2005.

Typically “uwu” usage denotes some sort of quirky happiness; sometimes it’s a chill joy, sometimes it denotes smugness and a lot of the time it relates to cuteness. Often, “uwu” will be used to describe being overwhelmed with cuteness, as seen in countless K-pop fandom posts.

I busted my biggest uwu from watching this vid Just look at him whining and stuff #PremiosMTVMiaw #MTVLAKPOPBTS @BTS_twt pic.twitter.com/W3pE8c2IdW

The three-letter emoticon, in which the two u’s serve as eyes and the w a cute, smiling mouth (typically with the u’s capitalized so the facial structure is more balanced: UwU) was simply one of many different emoticons floating through internet circles, usually in message boards and fan fiction sites for anime fans. But after around a decade of insignificant usage, something changed.

Know Your Meme traces it to a 2016 Tumblr post which reads as follows: “‘uwu’ isnt even a face to me anymore its actually the sound ‘oowoo'”

Another Tumblr user responded to the post: “IT’S SUPPOSED TO BE A FACE!?!??!” 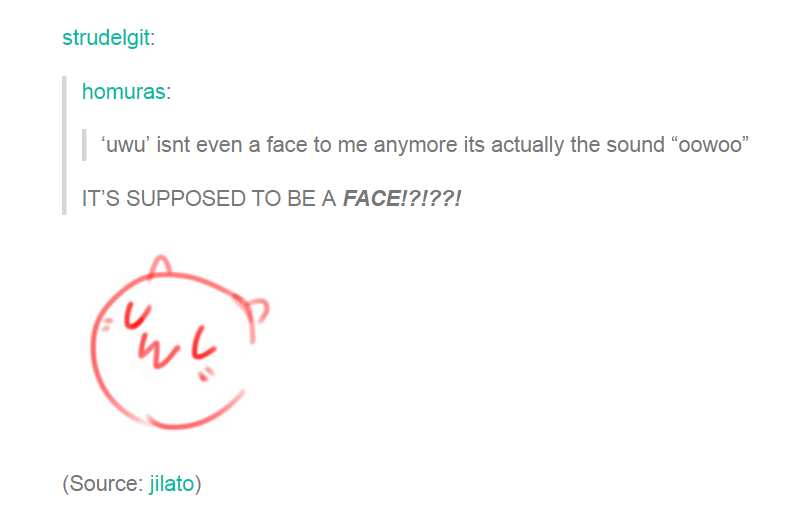 The post reached over 50,000 notes and it would seem that since then, uwu has taken off as its own ironic meme. It often pops up on Twitter as the subject of jokes, such as this viral tweet which also plays on the easily pronounceable nature of the emoticon:

Me, knowing “uwu” is a facial expression and not a sound

It also engenders a bit of nostalgia in its usage for the earlier internet moments; times in which we were so much less concerned with politics, where the craziness we created on the web was a reflection of an outside world that seemed pretty normal.

We hope next time you see ubiquitous memes like these, you’ll feel better equipped to handle them thanks to your friends here at NextShark.