Editor’s Note: This post has been updated with a response from Skidmore’s attorney.

Allison Skidmore, a Ph.D. student at the University of California Santa Cruz, recently wrote a disturbing post on Facebook wishing for genocidal harm on China.

In her post, Skidmore said she was reacting to a report by China’s state-run news outlet Xinhua that stated the government is recommending bear bile as a possible treatment for COVID-19 (novel coronavirus).

According to the National Geographic, the Chinese government has indeed recommended using Tan Re Qing, an injection that contains bear bile, to treat severe and critical COVID-19 patients.

Earlier this month, China’s national health policy agency National Health Commission listed Tan Re Qing as one of its recommended coronavirus treatments. Wildlife advocates have since criticized said recommendation as it runs contradictory to China’s earlier commitment to shutting down the live animal trade for food.

However, Skidmore’s post went well beyond criticizing the Chinese government and its policies as she directly condemned the Chinese people.

“There a special place in hell reserved for the f*ing Chinese and their archaic culture,” she said at the beginning of her post.

She then went on to say that she knew how China’s “wildlife ban” was “just a facade” and that wild animal trade would still continue. 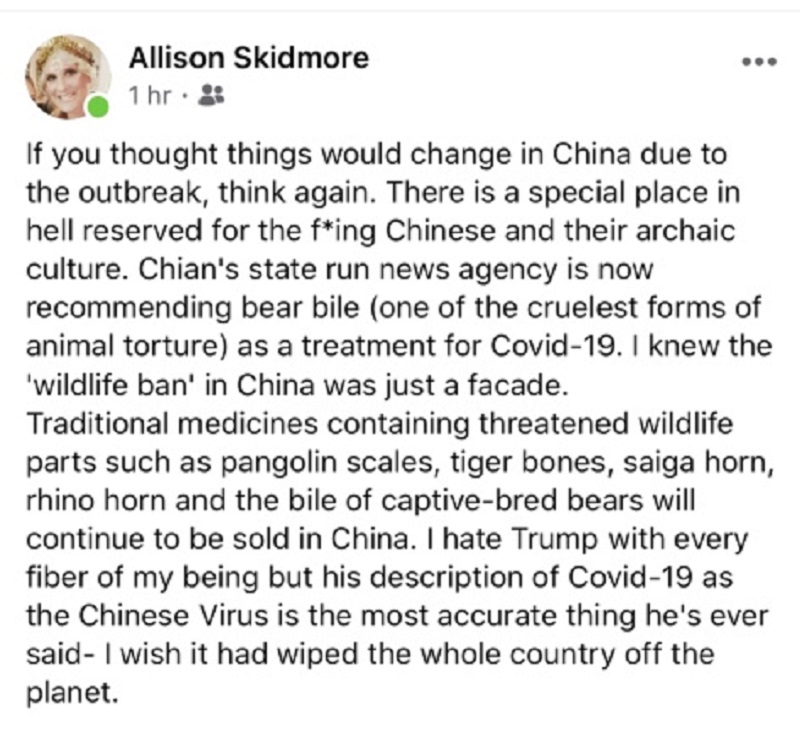 “I hate Trump with every fiber of my being but his description of COVID-19 as the Chinese virus is the most accurate thing he’s ever said,” she noted.

“I wish it had wiped the whole country off the planet,” Skidmore added in the end.

Skidmore also had an earlier post calling Chinese culture and its way of thinking both “horrible” and “backwards.” 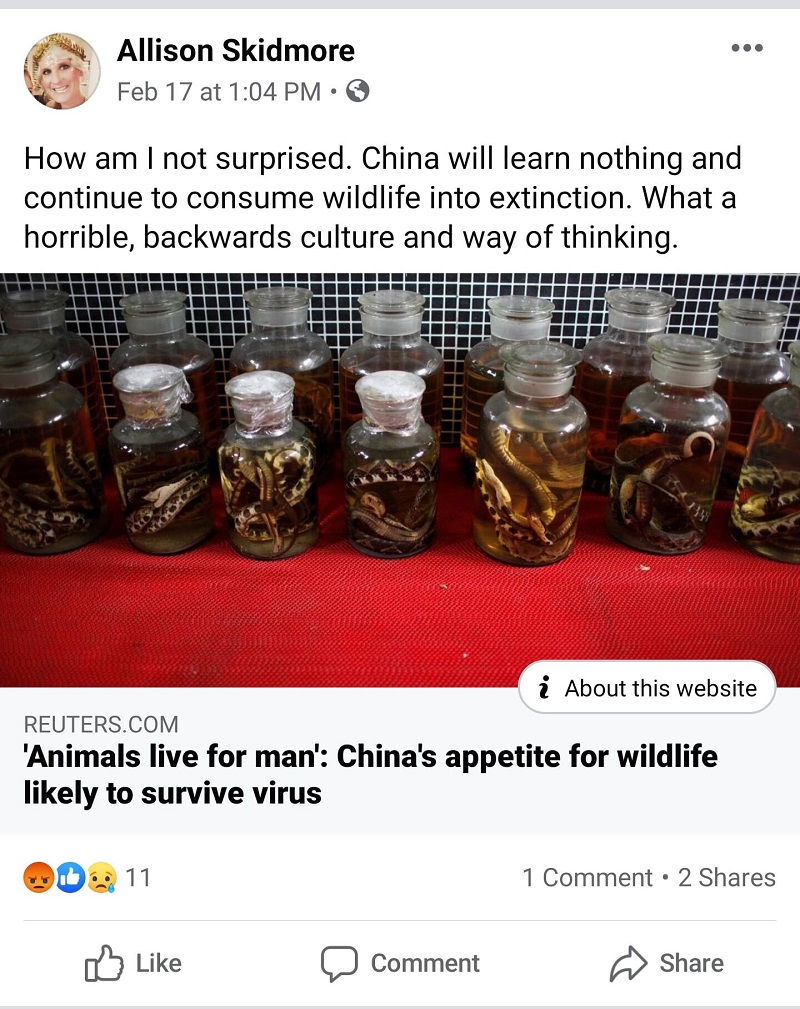 A NextShark reader who came across Skidmore’s posts reached out and shared screenshots of her post and lamented how the woman’s statements were out of line.

“It is very disturbing to have someone like Allison Skidmore as a PhD candidate at UC Santa Cruz, which has a large population of Asian students (including Chinese students),” the reader shared. “And it is scary to know Skidmore want [sic] to wipe their parents off the planet.”

When NextShark reached out to UCSC via Scott Hernandez-Jason, UCSC’s Director of News and Media Relations, the UCSC faculty released a statement condemning  Skidmore’s post as “appalling, hateful, and violent.”

But while the faculty noted that Skidmore’s comments were “an antithesis to our core values as a department, and to the UCSC Principles of Community,” it added that their “disciplinary options are circumscribed” since the message was posted on her “private social media account.”

Here is their response in full:

A member of our student community recently posted an appalling, hateful, and violent comment on social media. The comment was disturbingly xenophobic and deeply hurtful not only to the community it targeted, but to all of us.

As a faculty, we are outraged and saddened that a member of our student community holds these views, and additionally demonstrated profound thoughtlessness and poor judgment in making such abhorrent views public. We denounce the views expressed in this student’s comment in the strongest possible terms. Such views are an antithesis to our core values as a department, and to the UCSC Principles of Community.

The views were expressed on a private social media account, without any formal UCSC affiliation. As such, our disciplinary options are circumscribed. Nonetheless, we would like to underscore that freedom of expression is not just a right. With it comes a responsibility to nurture and care for all in our community, and to use that freedom in the service of social justice in our practices, research, and teaching.

Moving forward, the Environmental Studies faculty is committed to creating a department climate and culture centered in equity, justice, and inclusion, which makes clear that hate speech has absolutely no place in our community. Our response to this highly disturbing post on social media is merely the beginning of a much longer-term conversation about how we can grapple with issues of systemic and institutional racism. We are committed to doing the reflexive and difficult work, which is necessary to enable healing to occur.

On Thursday April 9, Skidmore, through her attorney, claimed that the captions attributed to her that had gone viral were not prepared or made by her and that her other statements were taken out of context.

NextShark reached out to Skidmore prior to the article’s publication but did not receive a response.