U.K. Woman Slaps Indonesian Immigration Officer After She Overstayed Her Visa in Bali

A British tourist who lashed out at an immigration officer has been detained in Indonesia and is facing criminal charges, according to the Directorate General of Immigration.

Auj-e Taqaddas, 42, arrived at Ngurah Rai International Airport in Bali only to be told that she would need to pay $4,000 after overstaying her visa, which expired on Feb. 18, 2018, the Daily Mirror reported.

Indonesian law states that an overstayer must pay $25 a day for staying 160 days in the country illegally.

Viral footage shows the irate woman slapping the immigration official in the face as he explained the situation.

She missed her 11:29 p.m. flight with Jetstar Airlines and has been kept in an immigration holding cell since Saturday while her payment and fines are processed.

In the video, Taqaddas is heard saying, “Because of your f***ing immigration I miss my flight, so take the f***ing money and get lost.” 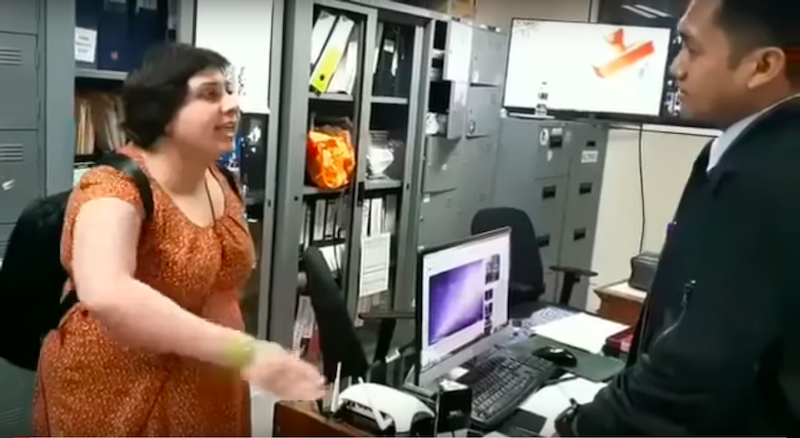 “I’m your f***ing mother,” before smacking the immigration official in the face.

“You aren’t paying for this f***ing flight. You b*****ds told me to bring the money, why didn’t you basta*ds tell me anything else,” she continued.

“And shut up your f***ing camera and show your ugly face in that camera.”

The guard defends himself by telling Taqaddas that she was in his office.

“This is your office, well show your ugly face,” Taqaddas replied.

“Based on the results of immigration checks, Taqaddas arrived in Indonesia with a visa free facility on January 19, 2018.

“She slapped the officer, who is a respected guard. She touched immigration, which means touching representatives of the nation. So we reported it to the police.”

While the exact fate of Taqaddas is unknown, it is reasonable to assume she now faces penalties for her assault of an immigration officer on top of violating the terms of her visa and will have to settle both matters before she is allowed to return home.