A drunk man who vomited a 10-centimeter (4-inch) tumor in China decided to swallow it back out of fear of losing a vital part of his internal organs.

A drunk man who vomited a 10-centimeter (4-inch) tumor in China decided to swallow it back out of fear of losing a vital part of his internal organs.

Identified only by his surname Yu, the 63-year-old man from Hubei province has reportedly been enduring a painful discomfort in his throat for a few weeks prior to the incident.

Thinking it was merely a sore throat that would eventually heal, Yu decided not to seek medical attention since his eating and breathing appeared to be doing just fine, reports AsiaOne.

Earlier this month, the man felt severely nauseous after going on a drinking spree and ended up vomiting out the contents of his stomach.

While puking out his previous meals, he felt a sharp pain in his throat. He was then terrified to discover a piece of flesh that resembled a forked tongue hanging out of his mouth. According to local reports, the fleshy part that stuck out measured about 10 centimeters in size. 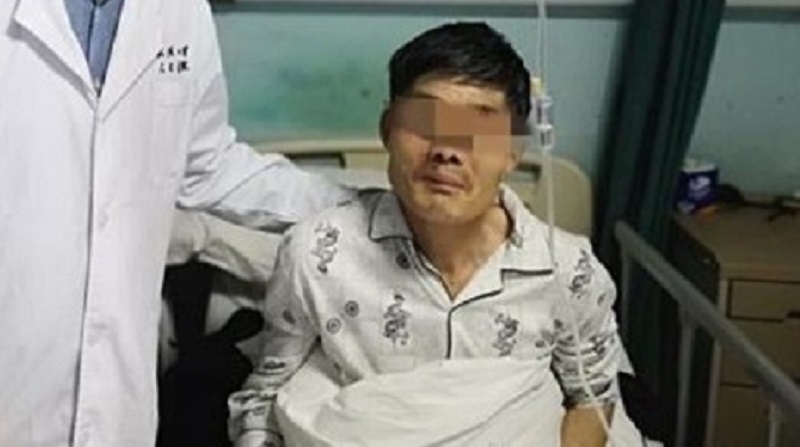 The man tried to cough the entire thing out but its tail end was apparently attached to the walls of his throat. Thinking that he accidentally threw up a part of his internal organs, Yu decided to push the fleshy piece of mass back into his body by drinking water.

Doctors at the Wuhan University People’s Hospital would later confirm that the mysterious mass was, in fact, a tumor growing inside his esophagus.

According to professor Deng Tao, the man who checked Yu’s condition, the top part of the tumor somehow detached itself after he began violently throwing up. While the tumor can potentially block his airway if it had grown any bigger, Yu was still fortunate that it was growing at the top of his esophagus.

After performing a short surgery on Yu to remove the tumor, the doctors found that the tumor, identified as a fibroma, was 15 centimeters (about 6 inches) in size. While fibromas are generally benign, the patient’s tumor posed a great risk in harming his breathing and might cause other complications.