Timstar Breaks Up With His Girlfriend Before Marriage Proposal, Fans Are Devastated

Timstar and Sijia Wang called it quits ahead of the comedian’s highly-anticipated proposal last weekend, ending a year-long relationship founded on boba tea.

“One year has gone pass [sic]. This is it guys and girls. I always tell her you are my Boba Tea. And girl, you are my one and only,” the 28-year-old wrote.

“Time to get married to this girl right here. Sijia Wang, will you marry me?”

The Asian Australian comedian rose to fame in 2014 after posting a video of himself proclaiming his search for a girlfriend, along with the motto “No Chest, No Sex.”

In September 2018, he and Sijia officially became a couple, all thanks to their mutual love for boba tea.

Timstar’s announcement was met with mixed reactions — with some expressing concerns that they might be marrying a little too early — but all signs pointed to overwhelming anticipation.

“Holy s***, who knew this day would come?” one commented.

Unfortunately, the proposal failed to see the light of day — as the couple broke up for unclear reasons.

“It was never an easy decision breaking up,” Timstar wrote in a Facebook post on Sunday. “But I guess that’s just life because we walk the roads ourself [sic].”

“I always wanted to make things work. I even set out morals, emotions and responsibilities for myself. But at the end I still feel neglected, unwanted and unappreciated. I did my best.

“The places we went to, the meals we had, the same boba tea we drank and the same roof we stayed in. I guess we just wasn’t [sic] meant to be.”

The sad announcement included photos of the comedian during their last meals as a couple.

His post raises some questions, however, as it claims that they severed ties on the same day (Aug. 25), while the proposal — which “never happened” — supposedly took place the day before (Aug. 24).

Still, the news was nothing short of heartbreaking, as Timstar shared the poem he would have read in his proposal to Sijia:

You are my baby to my Lg

You are my one and only Boba Tea

Without you I will be forever so lonely

I was looking for a girlfriend

But now you’re my best friend

You and I both have a chest

That’s why we both have a lot of sex

But last but not least

From the deep of my heart

Sijia baby… Will you marry me?”

The comedian concluded, “I wish you all the best and I hope you will find someone better than me.”

Users replied to the heartbreaking news with messages of empathy and support: 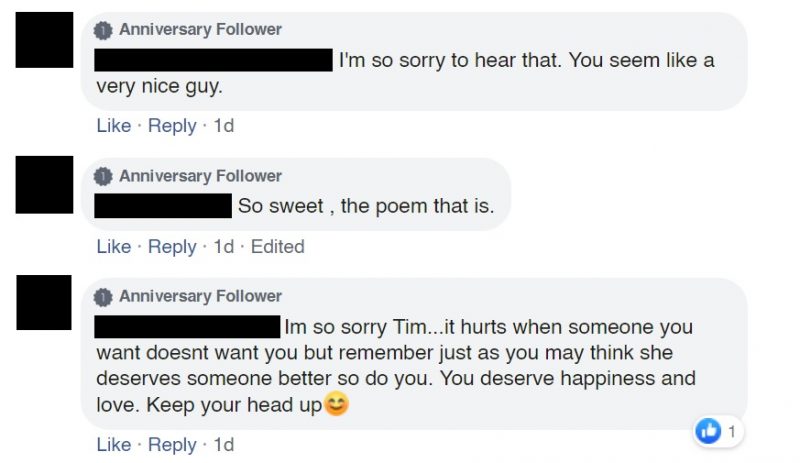 However, some people questioned the authenticity of the story, while others suspected that Sijia had only used Timstar to promote herself.