The track’s music video, featuring fellow Girls’ Generation (a.k.a. SNSD) members Hyoyeon and Sooyoung, has streamed to the tune of over three million views on YouTube since Friday.

In the video, Tiffany plots a retribution after learning from friends that her beau has been “double-dipping” with some other girl.

The deception culminates when she ties him up with hot pink rope, pours gasoline all over him, and sets him on fire for cheating.

Fans praised Tiffany’s vocals, the music video’s aesthetics, and the song’s message for anyone who dares to cheat.

Interestingly, “Teach You” is not just another track for the Los Angeles native, as it happens to come from a personal experience.

“Sadly, yes. It’s about a relationship where I believed there was this instant connection and I was easily blinded by charm and sweet words just as any woman looking for love,” Tiffany told NextShark. “All the hype just led to my broken heart.”

“In the end, this song shows that yes, I’m fragile, and yes, I’m sensitive and very emotional. I believe so strongly in love that when I’m heartbroken I have a bad reaction, and who knows what could happen?”

Funny enough, “Teach You” comes out just as a “senior quote” meme showing a side-by-side of Tiffany’s pre- and post-debut photos went viral.

The meme captions the singer’s high school graduation picture with a vow that those who did not date her would regret it. 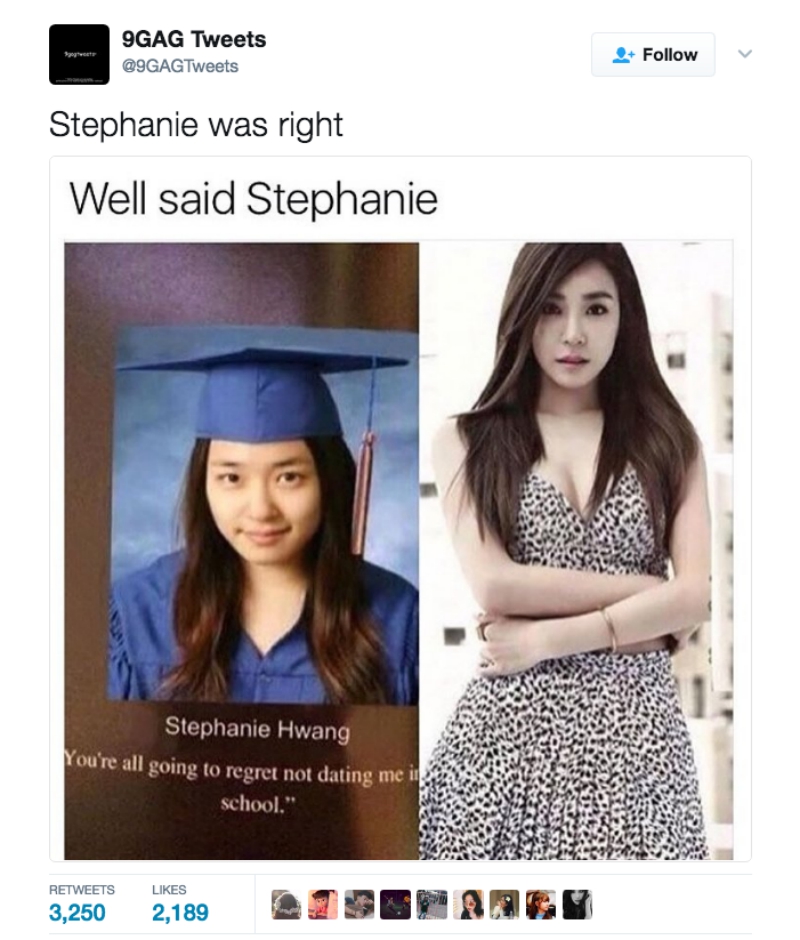 “I can’t believe it went viral lol. It is NOT real, though I wish it were now. I’m flattered that people see the ‘current ME’ as the meme, but also a little embarrassed that people saw the ‘high school ME’ as the meme,” Tiffany laughs. “I’ve seen it throughout my career but no one in Asia has ever mentioned it or asked me about it because it was in English.”

“I think I first came across it when I was on the fifth year of my career and it made me question my high school me, hard, ‘Was I that dorky?’” she asked laughing.

“I was extremely outgoing, and now to think of it, maybe borderline annoying,” Tiffany recalls. “I would do almost every extracurricular activity from show choir, orchestra, Korean club, yearbook club, and even put myself in hakwon without my parents forcing me…”

“But hey, it took that much passion to kick myself in the butt as older me in my career,” she says smiling.

The singer also recalls having her own “little mean girls.”

“And yes I had friends… my own little mean girls where we all wore the same Ugg boots in the winter, and matching hot topic shoelaces in the spring.”

Tiffany debuted in the U.S. with “Over My Skin” in June. Prior to her exit from label SM Entertainment, she released “I Just Wanna Dance,” her very first solo.

She cites having more autonomy as an advantage of doing it alone.

“Pros [of going solo] would definitely be having full control and being able to create on my own pace. There are no cons because I accept all the responsibilities that come with it.”

Still, she misses her Girls’ Generation co-members, whom she had spent more than a decade with.

“What I miss most would be my bandmates for sure. I miss the loud energy in the green room of all my girls together the most.”

Needless to say, Tiffany has become an inspiration to many, especially her alma mater. Her school’s marching band was featured in her last single.

“I recently reunited with my middle school band director who is now teaching at Diamond Bar High School. I reached out to feature the DBHS marching band in my music video ‘Over My Skin’ and it felt so good to catch up with him and hear he is still the ‘whiplash’ style teacher I remember.

“But it was the sweetest thing when they told me I’m a role model to all the students there!”