An Asian American Twitter user/tennis fan has been persistently badgering Australian tennis star Nick Kyrgios on social media to challenge him to a one-on-one tennis match.

Sen Chao of Sacramento, California has called upon the top-ranked player in Australia (24th in the world), urging him to face him in a tennis match to allegedly “teach him a lesson on how to behave on court.”

I have officially challenge @k1ngkyrg1os to a tennis match. @NickKyrgios are you ready??? pic.twitter.com/HEe70OUkAw

In what many may view as an attempt to get his 15 seconds of fame, the 29-year-old has been repeatedly mocking the athlete via some fiery tweets in recent weeks.

I don’t care who @NickKyrgios is. A person who can disrpesct the game, can take an Ace right in the face! @work pic.twitter.com/tLn2STt1ox

Chao, who reportedly played some tennis in college. even uses his Twitter asiangamerbro profile description to call the tennis player out: “Officially training to beat ranked number 24 in the world, Nick Crybaby Kyrgios. See you after Wimbledon. #followyourdreams #everysingleday”

According to Chao, he is “better than most pro tennis players on tour.” He also taunted Kyrgios by saying “I hope you’re not too scared #bum.” 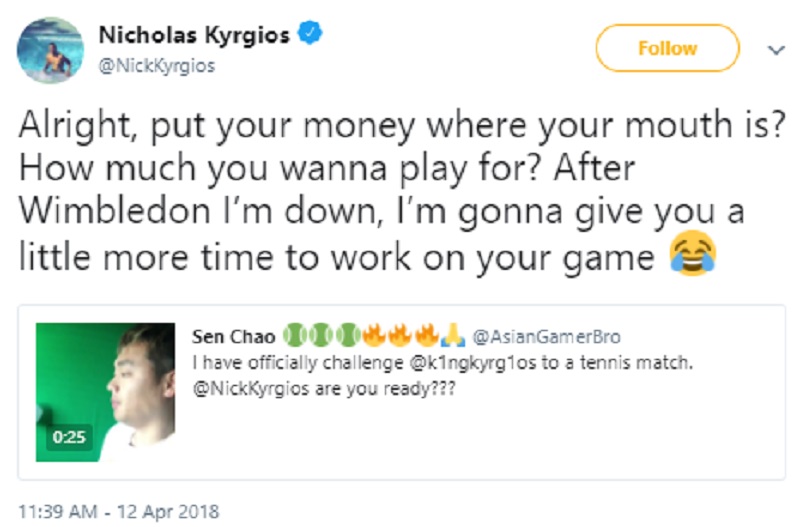 But realizing how pointless the conversation was heading, Kyrgios tried to make light of the exchange:

The relatively lighthearted response seemed to embolden the Twitter user more as he dished out more insults. 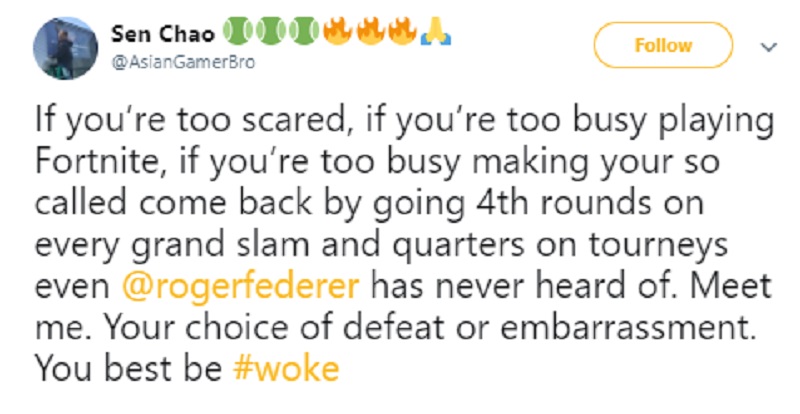 Chao proceeded to berate the athlete even more by insulting him and also showing off his tennis skills via his training videos. 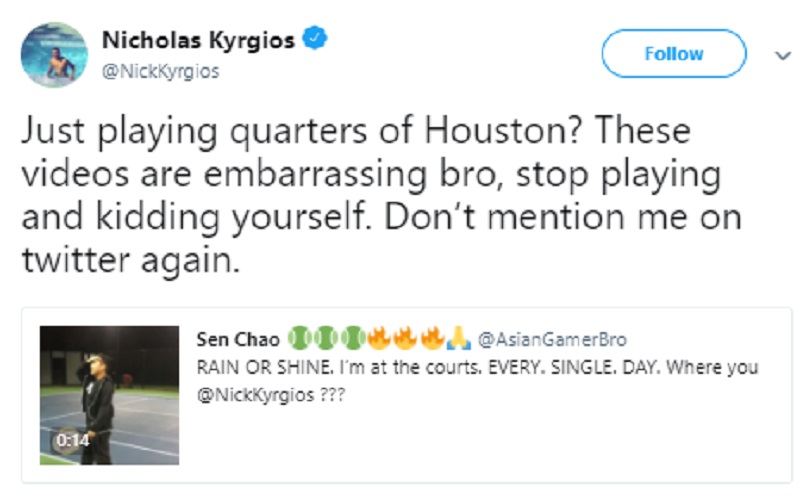 Kyrgios finally responded with a sarcastic comment under a not-so-impressive video of Chao’s training.

“For those of you wondering, this is the man that has repeatedly called me out for the last 2 weeks, maybe I do have to be on my game.”

For those of you wondering, this is the man that has repeatedly called me out for the last 2 weeks, maybe I do have to be on my game 🤭😂 pic.twitter.com/E8fv1HLsPb

Despite the embarrassing clap back, Chao remains undeterred and is adamant in pursuing his goal of an actual match.

In an interview with SCMP, the 29-year-old revealed that he began trolling Kyrgios after his loss to Rafael Nadal in last year’s China Open final. He found it disappointing that he appeared to have barely even tried to win.

“It started last year when I saw this crybaby at the China Open thinking he’s too good for the game,” Chao was quoted as saying. “Acting bored, nonchalant. Even when he beat my favorite player in the world, Roger Federer.

“That’s when I discovered my passion for the game [has returned]. I had to call him out for not playing the game the right way. And now I have to play him. One on one. So I can teach this wannabe pro player a lesson.”