Takauki Kimura, one of Bruce Lee’s top students and closest friends, passed away peacefully in his home on Friday at the age of 96.

Known to his friends and supporters as “Taky,” the Japanese American martial artist devoted decades of his life to honoring Lee. As an important part of Lee’s life, Kimura appeared in several documentaries focusing on the martial arts icon’s legacy.

For many years, Kimura taught a hybrid martial arts technique heavily influenced by Bruce Lee’s personal philosophy. Kimura’s students of Jeet Kune Do (Jun Fan Gung Fu), who referred to Kimura as “Sifu Taky,” launched a crowdfunding campaign on GoFundMe to raise money for both his funeral and a tribute planned by friends and family.

Our Bruce Lee family lost a dear friend today. Taky Kimura passed this morning at 96 years old. First and foremost, Taky was a beautiful human being, a gentle soul with a kind heart. 1/ pic.twitter.com/9uhlyFZUOL

“Our Bruce Lee family lost a dear friend today,” the tweet shares. “Taky Kimura passed this morning at 96 years old. First and foremost, Taky was a beautiful human being, a gentle soul with a kind heart.”

“Taky was also my father’s best friend – best man at his wedding, first assistant instructor at his first school in Seattle, and loyal friend and supporter of our family. Taky never charged his students to learn jun fan gung fu and jkd.” 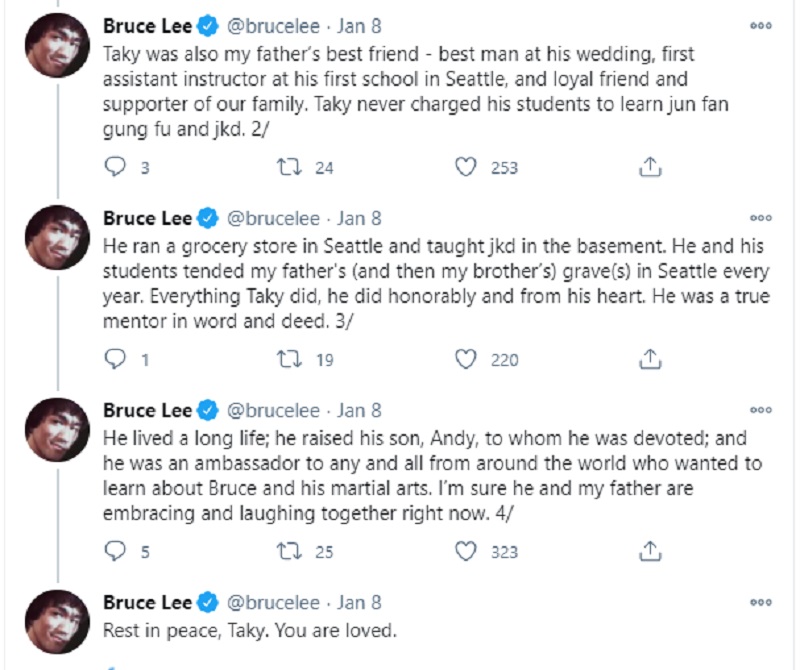 According to the tweet, Kimura ran a grocery store in Seattle and taught Jeet Kune Do in the store’s basement.

“He and his students tended my father’s (and then my brother’s) grave(s) in Seattle every year. Everything Taky did, he did honorably and from his heart. He was a true mentor in word and deed,“ Lee’s daughter wrote.

On their GoFundMe page, Kimura’s students refer to him as a beloved teacher, mentor and friend.

“Sifu Taky had a profound impact on everyone who came into contact with him,” fundraising organizer Matt Emery wrote. “In doing so, he not only enriched the lives of those he encountered, he changed their lives for the better. Sifu Taky’s legacy of kindness, respect and integrity will live on forever.”