Since September, the Subtle Asian Traits has grown to over 1 million followers, creating a space for Asians, particularly those who grew up in western countries, to connect and share experiences unique to them through the proxy of funny memes.

As a 30-year-old Chinese-American who grew up in San Francisco, I remember a time before the internet, and then seeing it quickly become the thing we can’t spend one second off of. I was grateful for it because it offered communities where I could meet and and connect with others like me. Spaces like the legendary Asian Avenue, AIM, and Xanga were places where I could interact and share experiences with other Asians living in western countries. 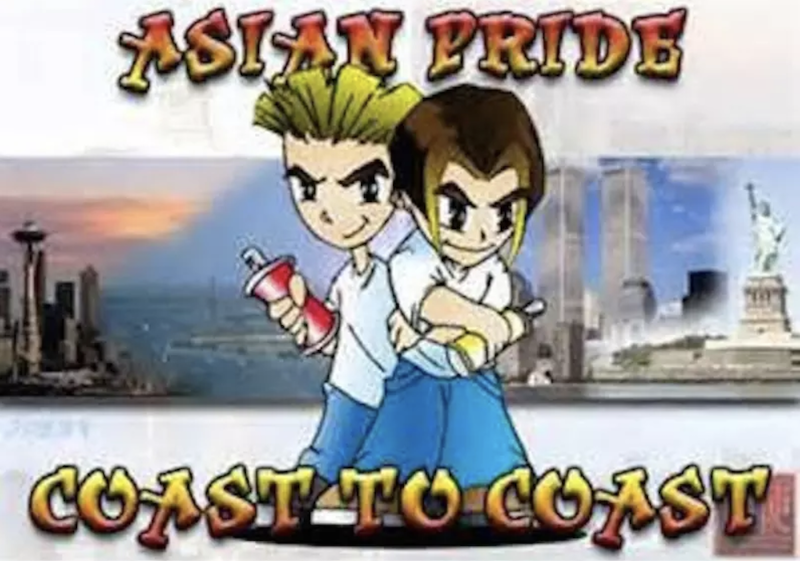 Most of those platforms are long gone, and until now, there hasn’t been an online community like them since.

…And then Subtle Asian Traits came out of nowhere and took the world by storm.

Since September, the group has grown to over 1 million followers, creating a space for Asians, particularly those who grew up in western countries, to connect and share experiences unique to them through the proxy of funny memes. 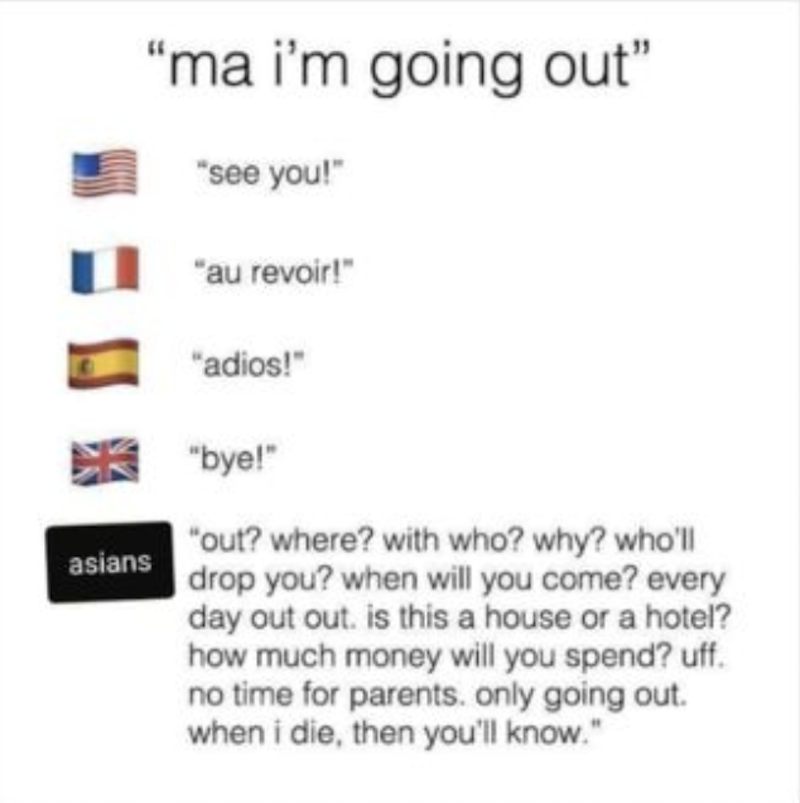 The group has received worldwide fame with profiles on The New York Times, BBC, The Atlantic, and more. All 18 admins and moderators are becoming stars in their own right, getting an endless amount of friend requests and messages on Facebook daily.

Trying to have all nine founders together proved to be incredibly tough with everyone’s busy schedules, so I was only able to talk with 5 of them on Skype after one of their weekly meetings.

Getting connected was a challenge due to technical difficulties, but when they finally picked up, I saw Kerry Kang, one of the founders, looking back at me who introduced herself, then the camera spun around to the next founder, who quickly realized that this is not an optimal way to interview.

“YOU ARE, actually!” Kerry said as the room burst into laughter.

All the founders are newly graduated high school students with the exception of Angela Kang, 21, the older sister of Kerry Kang, 17. Other founders who were present during our interview were twins Tony and Anny Xie, 17, and Kathleen Xiao, 18.

The bunch met during the years they attended Chinese school on the weekends — most likely at the demand of their parents. They had a group chat dedicated to sharing memes and content amongst themselves. Inspiration for the group came from another Facebook group, Subtle Private School Traits.

“We always share Asian jokes in our group. We took on the private school traits idea and made it into an Asian version,” Kathleen, said.

“We have so many Asian traits that we found were relatable and funny,” Kerry added.

Kerry pitched the idea of a similar group focused on Asian traits to his older sister Angela, who like the idea. From there, they pitched it to their private Chinese school chat of nine people. Xiao then created the group and made all nine members admins. From there, “Subtle Asian Traits” was born.

“At the time, ‘Subtle Private School Traits’ had 70,000 followers. When Kathleen made the group, we were like ‘we will never get as many as they get.’ Their group just looks way more successful than ours. And then we’ve overshot them by 10 times!” Angela Kang, said. 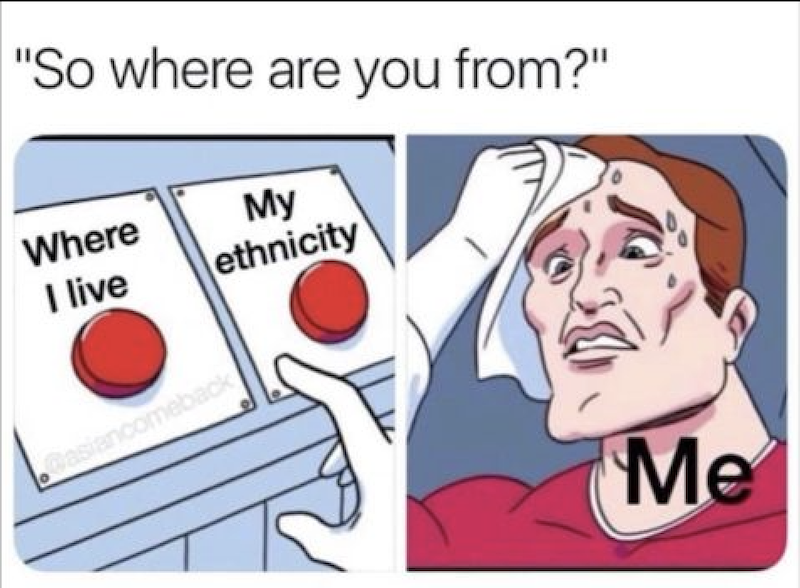 However, they didn’t expect the group to take off so quickly. The group was launched on September 16, which was around the time of everyone’s final exams.

“We created the group out of thin air, it was stressful for everyone trying to keep the group going in the middle of exams,” Angela said.

The success of the group quickly outgrew the founders themselves, with post requests flooding in faster than they could moderate. They had to quickly bring on more moderators to ease the workload, but it’s still been tough. At the time of our interview, there were still 8,000 pending posts to approve. Facebook recently even reached out to the admins to congratulate them on their success.

“Whenever we go out to bubble tea places, we hear people next to us talking about Subtle Asian Traits, it’s pretty exciting,” Kathleen said. 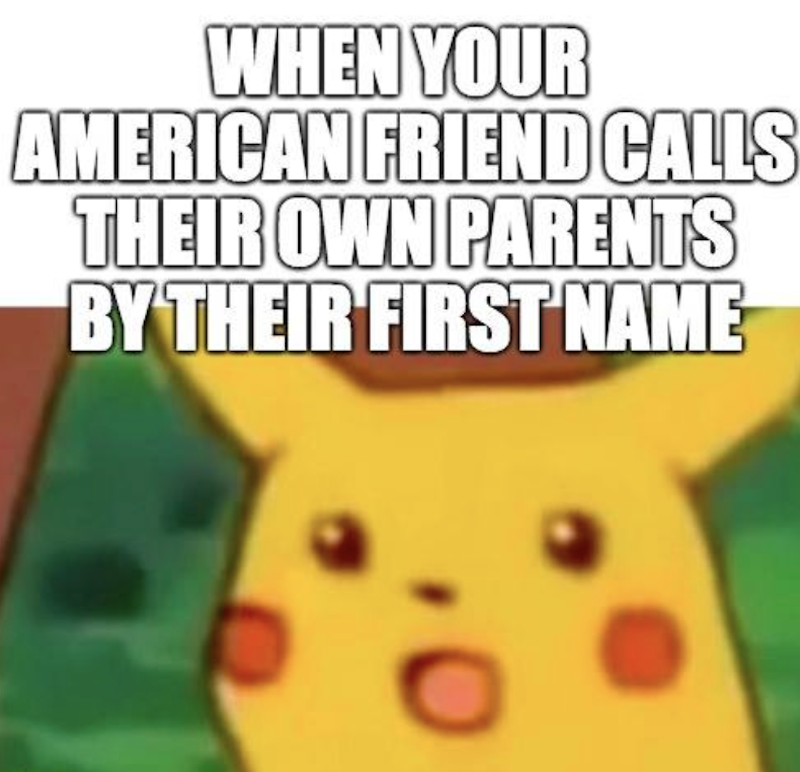 One of the things that has helped preserve the appeal of Subtle Asian Traits is the fact that the group only does pre-approved posts. They do this to prevent what happened to the Subtle Private School Traits group, which now appears to have disappeared after multiple searches on Facebook.

“We are scared of what happened to Subtle Private School Traits.” Kerry said. “It just got really cloudy where people were sharing posts that weren’t funny anymore, it just got really annoying, it wasn’t relatable anymore.”

“Our posts are all pre-approved — Subtle Private School Traits didn’t have that, so anyone could just post.” Angela said. “We realized that if we want to make sure the group continues on, we need to have pre-approved posts.”

“Yes we are controlling what our viewers see, but it’s for the greater good for what we believe. Once you see all this unrelatable content, we are going to lose our viewers.” she added.

While the group has seen immense success, it also has faced criticism. One is the seemingly lack of inclusion of other Asian ethnicities, particularly Southeast Asians and South Asians. The group acknowledges this and is working to prioritize these sorts of posts and to get more underrepresented Asian ethnicities to contribute content.

“We are all Chinese/Australian, there’s nothing we can change about that,” Angela said. “We do encourage all nationalities to contribute. We do encourage other posts from Indians, Sri Lankans, etc. But we just simply don’t have that many posts, we are just not getting enough.”

Other critics says a lot of the memes tend to reinforce negative Asian stereotypes. Ann Gu, another founder, told BBC that most community members “have generally come to terms with their cultural identity.”

“I think people started to accept who they are and their cultural backgrounds more,” Kathleen told NextShark. “Like personally, after ‘Subtle Asian Traits,’ I’ve come to appreciate what my parents tell me. Because it’s relatable. It just makes me more proud to be Asian, knowing that I belong to this community.”

Lastly, some have pointed out that the whole group is just mindless memes that appeal to the lowest common denominator, and lack more serious conversations on race and politics. And that’s a fair point for a  lot of issues within the Asian community, and having so many of us in one place has the potential for productive conversations that make positive societal change. 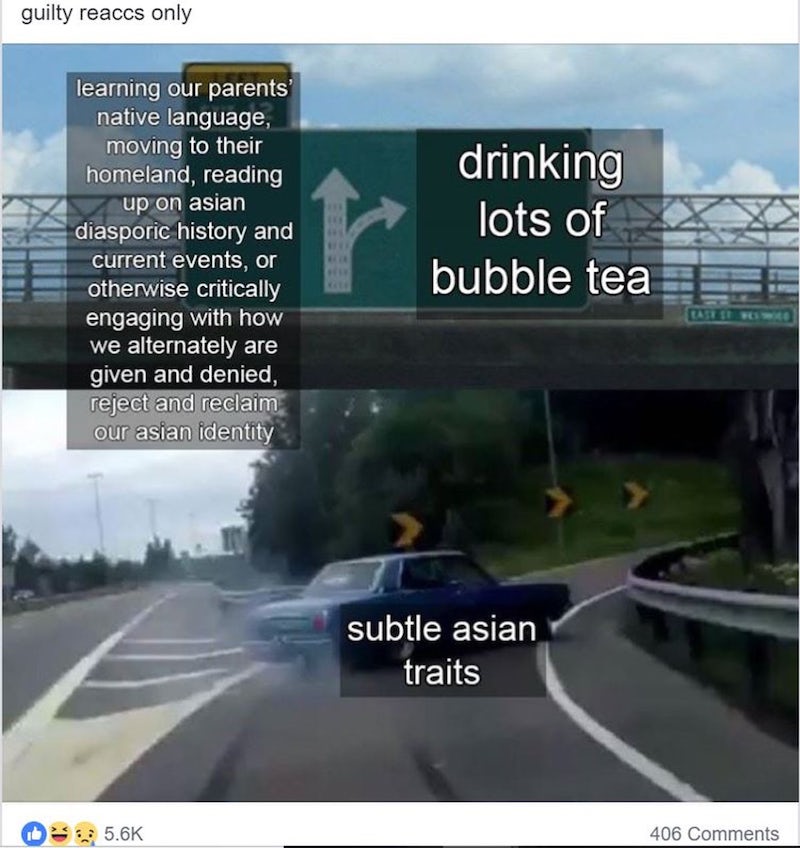 “Just because we have a platform of 1 million people, as selfish as it sounds, it’s not really our job to be advocating political things or anything like that,” Angela said. “We really had the intention of creating something fun like memes, nothing too serious. Yes we are all Asian, but we do not 100% represent what everyone wants. I don’t think it is our job to either. It’s a bit harsh to point fingers at us and say that just because we have a platform, we have to educate.”

As unpopular as this opinion might be, Angela also has a point. At the end of the day, these are a bunch of students who set out to do something for fun. They never intended for it to get beyond their extended friends. The group is still under four months old. Hopefully, as time passes, the group could evolve into something more.

“We have to find the right balance, to please as many people as we can. No matter what we do, there’s going to be someone who doesn’t agree with what we are doing. It’s just about finding the right balance,” Tony said.

“We’re not entrepreneurs, social influencers, media people or actors, we are literally just normal people who created the group for fun. It just happened! It could’ve happened to anyone. We take credit for creating the group, but anyone could’ve created the group easily and be doing what we are doing now,” Angela added.

The group has recently started accepting sponsored posts, however, they stress that they only focus on campaigns that will be beneficial to the community.

“We aren’t just going to accept any deal that will give us money. At the end of the day, we care about this group and we want it to last,” Annie said.

“It’s a good way for businesses to start up, especially if they’re run by Asians. We want to support Asian small businesses,” Kerry added.

As of now, the group says all the money they are earning is focused on protecting “Subtle Asian Traits” name and identity. They’ve currently registered a trademark, domain name, and other assets under the brand.

“None of the cash is going towards us, yet, because we have a lot of things we have to pay for,” Tony added.

The group is now trying to take their newfound responsibilities more seriously and working to meet every two weeks.

“But it mostly ends in us playing board games, swimming, and eating chips,” Kerry said as the room bursts out laughing.

With the exception of Angela, who just graduated from college majoring in medical imaging, all the founders are currently preparing for college. Annie is planning to study Arts, Kerry plans to focus on civil engineering and architecture, Kathleen on business, and Tony is majoring in mechanical engineering.

As we were about to end our call, I mentioned that we should all grab boba the next time the team and I were in Australia.

Angela gave me a weird look and scoffed.

“Ugh, it’s bubble tea!” she yelled out as the line cut out.

No Angela, it’s boba. Fight me.

Cynthia Liu and Tiffany Huang contributed to this report.