South Korea is reportedly denying a viral story of three Chinese women being barred from flying back to their home country because airport officials couldn’t confirm their identity after undergoing successful plastic surgery.

The picture, which surfaced on China’s social media platform Sina Weibo, was shared by Jian Hua Hua, a Chinese television anchor. It shows three Chinese women with puffy faces covered in bandages, waiting in an unspecified South Korean airport with their passports in their hands.

The caption in the now-deleted Weibo post allegedly read:

“Received from frontline personnel at the airport during the holidays: These women made use of the long holidays to undergo plastic surgery in South Korea. On the way back, they were unable to leave the country and had to await proof of identification. Even your mother won’t recognize you.” 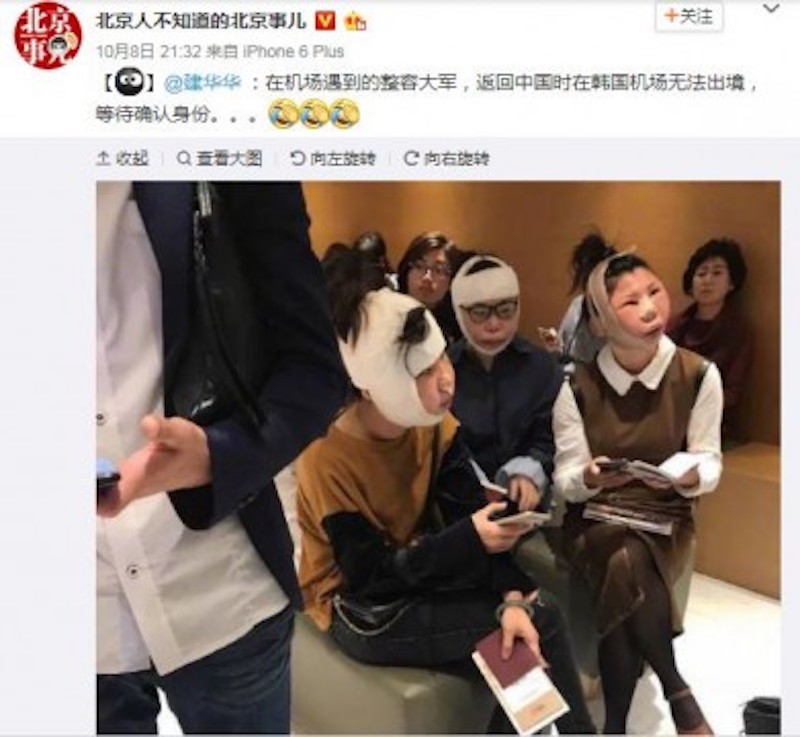 People who undergo plastic surgery will have to wait at least 15 days before boarding a flight, according to Chinese Eastern Airline Regulations. As a requirement, the clinics must also provide documentation to help prove the identity of the patient.

South Korea’s Ministry of Justice vaguely denied the whole story after it went viral, calling it “news without any basis in facts,” as reported by South Korean newspaper Chosun Ilbo, via Shanghaiist.

It is fairly common to see Chinese tourists coming to South Korea to undergo plastic surgery. But lately, the number of people who travel to the country to have such an operation greatly declined after the deployment of the United States’ anti-missile system THAAD (Terminal High Altitude Area Defense).

Data released by the Ministry of Health and Welfare on Wednesday shows a 24.7% decline of Chinese people traveling to South Korea for medical reasons. The record was for the period of January to June 2017, according to The Korea Herald.