A Singaporean ad is attracting mixed reactions throughout social media for assuming that data deprivation is practically similar to starvation.

“Almost half of Singaporeans struggle to survive more than one day without data.”

“Nearly 70% of Singaporeans are hungry for more data.”

Both end with “Fight data deprivation. Unlimit your telco. Now.”

Hazirah Mohamad, who happened to pass by the posters at a train station, took her disappointment to Facebook last week, prompting discussions among netizens.

Hazirah claimed that she sent a message to Circles.Life, expressing her “extreme displeasure” at the ad’s “insensitivity,” but only received a generic customer service response. 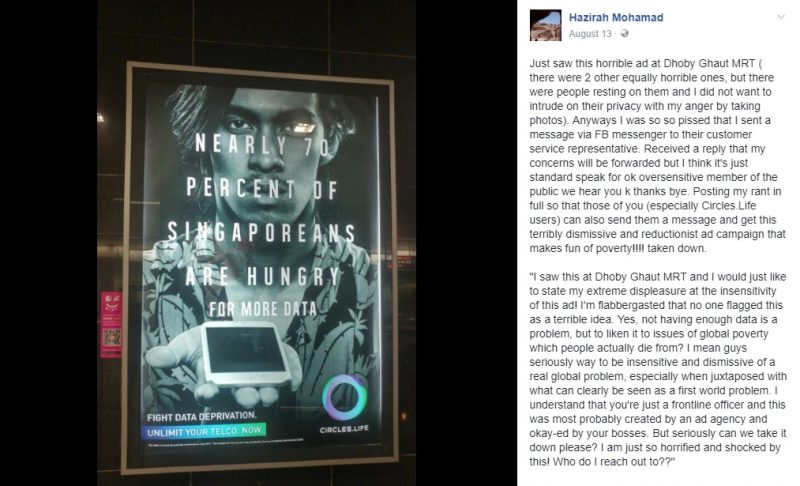 She wrote to the company:

“I saw this at Dhoby Ghaut MRT and I would just like to state my extreme displeasure at the insensitivity of this ad! I’m flabbergasted that no one flagged this as a terrible idea. Yes, not having enough data is a problem, but to liken it to issues of global poverty which people actually die from? I mean guys seriously way to be insensitive and dismissive of a real global problem, especially when juxtaposed with what can clearly be seen as a first world problem. I understand that you’re just a frontline officer and this was most probably created by an ad agency and okay-ed by your bosses. But seriously can we take it down please? I am just so horrified and shocked by this! Who do I reach out to?”

Hazirah decided to rant on Facebook so that others can rally with her. So far, her post has raked at least 180 comments, with many agreeing that the posters are “tone-deaf”: 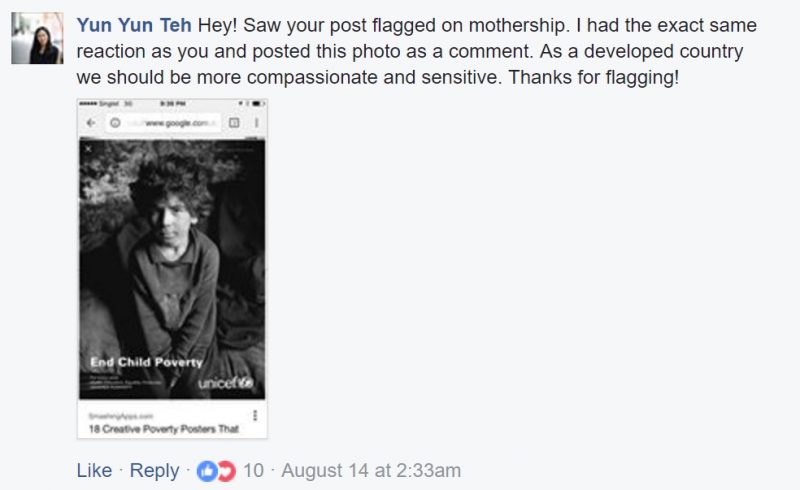 Others, however, thought that the posters were both creative and witty, and that Hazirah was being too sensitive:

Circles.Life has since responded to the controversy, thanking netizens for bringing the ad to its attention. It promised to take note of the feedback and “include it to the next round of process updates,” Marketing Magazine reported.

Without further comment on the negative feedback, a spokesperson told the outlet:

“Our data deprivation movement aims to bring awareness to the fact that Singapore has been deprived in mobile data offerings. Our users consume on average 8GB of data each month, twice the claimed national average.”

What do you think about the posters?