California boy chased home, punched by alleged bullies despite offering $50 for his safety

An Asian American boy was followed and punched by a pair of alleged bullies just outside his home in Santa Clara, California, on Saturday afternoon, according to reports.

Editor’s Note: This article has been updated to include the victim’s age and school level.

An Asian American family in Santa Clara, California, has pressed charges against two boys who allegedly chased a 13-year-old family member before punching him multiple times just outside their home.

The vicious attack, which was captured by a home security camera, allegedly occurred at around 5:25 p.m. on Saturday.

Nina Leslie, who posted the video on Instagram on Monday, said her younger brother was walking her dog when the two boys followed him. The victim allegedly ran after hearing them say, “Let’s get him.”

In the video, the alleged bullies can be seen cornering Nina’s brother at their own doorway. One of the boys, who is wearing white, returns to his bike before allegedly saying, “I got something bigger coming his way.”

The other boy, who is wearing black, can be seen staying behind. The victim offers $50 for his safety, but his alleged bully still punches him twice.

The victim protected his sister’s dog throughout the attack.

“It pains me watching this video over and over because I have never felt this sick to my stomach watching an innocent little boy get hurt,” Nina wrote. “My brother was punched two to three times. He held my dog so my dog wouldn’t get hurt, [and] that’s one reason he didn’t fight back.”

Nina said the two minors have been bothering her brother “for a little over a year now.” In an interview with NextShark, she confirmed that the boys and her brother — who is currently on seventh grade — attend different schools.

“This incident has affected our family’s safety. We are worried about the other families retaliating once the word goes out. But it’s already gone out,” Nina told NextShark. “My brother fears going outside and we fear his safety.”

Nina said their family pressed assault and battery charges on the day of the incident. They have since been in contact with law enforcement, as well as the schools of the parties involved.

“You’ve created a fire in me that I’m not gonna let go. To hurt my brother like that and for him to eat all your punches up like it didn’t faze him. Trust [that] my brother is a strong boy and Imma stand by him,” Nina wrote in a follow-up Instagram Story. “I’m coming back 10-fold.”

An Instagram user who described themself as a concerned parent said they reached out to Buchser Middle School, where the pair of alleged bullies attend, to report the incident. Shortly after, Principal Justin Ponzio responded with a statement.

“Late Sunday night, we were notified of an incident involving Buchser Middle School students that occurred off campus over the weekend. We understand that this was shared on social media as well. Because this incident did not happen at school, our authority in this situation is limited,” Ponzio wrote. “However, this is a very serious situation and we reported it to police immediately and are cooperating in their investigation, including identifying the students involved.”

Ponzio also said the school has spoken with students and their families regarding safety. He assured that “harassment, bullying, intimidation, discrimination, threats and weapons of any kind are not tolerated.” 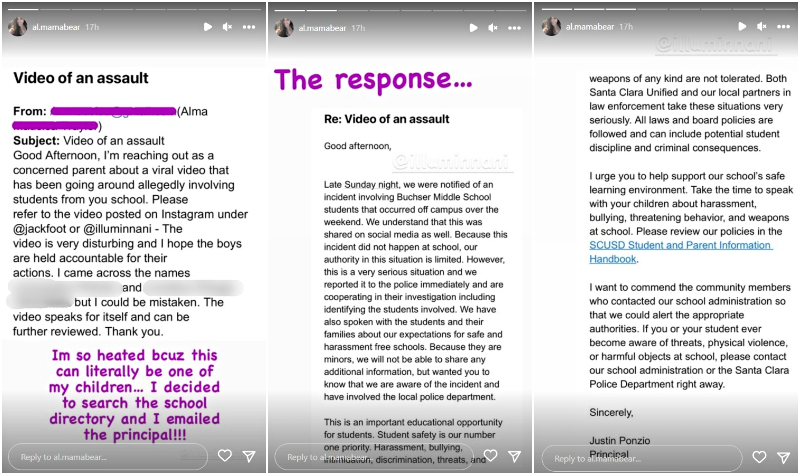