Steve Zhao, the founder of Sandbox VR, went from almost burning through all his funds after launching in 2017 to recently closing a $68 million Series A with iconic Silicon Valley VC firm Andreessen Horowitz.

Sandbox is the most fun I’ve had in VR by far. Today they announced $63M in funding led by @a16z: https://t.co/D0wsD41Ovg by @kifleswing

Started in 2017 in Hong Kong, Sandbox VR is an immersive virtual reality experience in the form of a retail store at a mall that went from just Hong Kong to now 10 retail locations in seven countries. The company started with Steve Zhao and a team of just seven.

When the Hong Kong location opened in 2017, it quickly became completely booked for the next 60 days, according to Business Insider. The VR experience includes scenarios of the zombie apocalypse or Hong Kong imagined in the year 2088. The VR session lasts one hour, costs $40 a person, and can be booked online.

Siqi Chen, Sandbox VR’s Chief Product Officer, revealed in a Medium post on Monday the story of how they pulled off a massive funding series for the company. Chen is a Silicon Valley veteran in his own right, having been an angel investor, a GM at Zynga, a VP of growth at Postmates, and the CEO of multiple internet properties.

It began when Siqi Chen reached out to Andrew Chen, a general partner at Andreessen Horowitz and someone Siqi addresses as “second favorite cousin” in email. 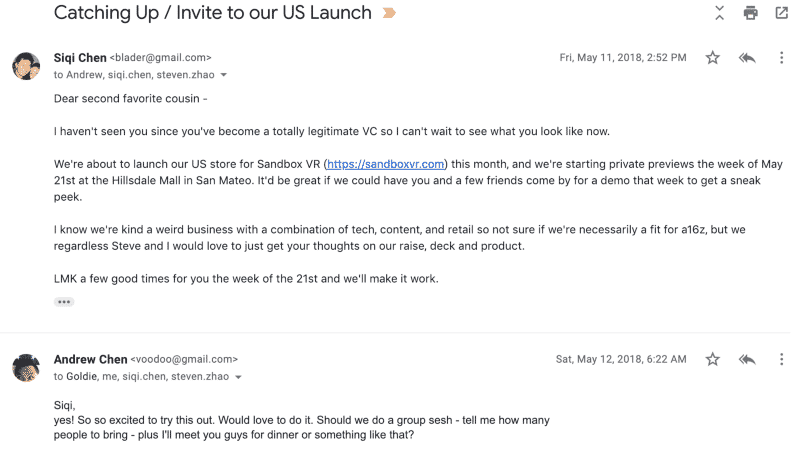 A dinner later, Andrew Chen would introduce the Sandbox team to Marc Andreessen and Ben Horowitz at a Sandbox location in the Bay Area over the weekend to test the product and talk numbers.

“The next day was a Monday, and we were invited to a16z’s partner meeting. After delivering our formal pitch, at 4 that afternoon, I get this text from Andrew:

“Well it turns out we had another investor demo at 8:30, so we could do one or other.

“Andrew replied: ‘What if we came right now?’

“And that’s how half an hour later, at 4:30 in the afternoon on a Monday, we found ourselves at our San Mateo Sandbox with every single General Partner from a16z.

“Of course we were as excited as they were. And it turns out the next day, Andrew and a few others partners flew to Vegas to try out some of the other better known out of home VR experiences.

“We absolutely love everyone in our space, but suffice it to say that that same night, they flew back and immediately called us up to meet at an In-N-Out. (That one in Millbrae by the airport).

“And in about 3 hours, at 1AM in the morning, we hammered out the deal over a napkin.”

Before landing a successful Series A, the idea of a retail-based VR experience expanding was a hot bet. Siqi Chen described the challenge:

“When you think about 3 sectors that just aren’t hot right now — there’s VR, which is in somewhat of a winter right now, there’s content, which is never hot, and there’s retail, which basically nobody invests in.

“And we’re a company that’s doing all 3.

“At the same time.

“On top of that, we’re a company founded and based in Hong Kong, which nobody invests in.”

Nevertheless, the company has been receiving shoutouts on social media from their locations, evening earning a tweet with Kanye West, who visited one of the locations.

The company hopes to use the funds to rapidly bring the VR experience to major cities everywhere. Founder Steve Zhao told Business Insider:

“We have locations planned for LA, Austin, New York, and Chicago, and we’ve inked multiple deals with Westfield malls across the country.”

All images used with permission.