A San Mateo restaurant owner who announced that he would not serve customers wearing a “Make America Great Again” hat has apologized and rescinded his comments after a flurry of controversy.

Kenji López-Alt, a celebrated cookbook author who runs Wursthall Restaurant & Beerhaus, said in a now-deleted tweet on Jan. 27 that “if you come to my restaurant wearing a MAGA cap, you aren’t getting served, same as if you come in wearing a swastika, white hood, or any other symbol of intolerance and hate.” 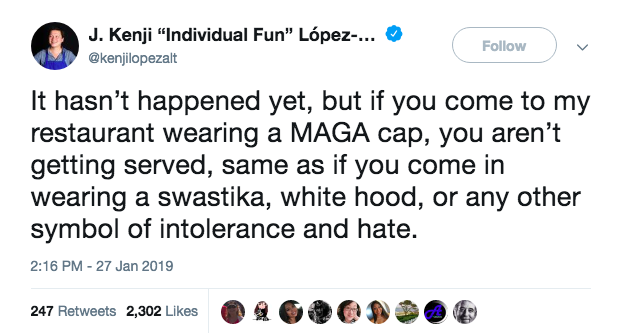 Initial reactions to the declaration were mixed, according to the San Francisco Chronicle.

San Mateo resident Esher Shek, 39, agreed with López-Alt’s sentiment, but questioned the idea of a ban. “[The right] already feel[s] like they’re being demonized by what they call the liberal elite,” she said. “We shouldn’t add fire to that. Instead, it should be us creating a dialogue, leaving a space open to discuss the issues.”

Bao Agbayani, a 28-year-old visiting his brother from the Phillippines, said, “You’re discriminating against those with different political views. That’s just not OK.”

In response to accusations of discrimination, López-Alt said in another now-deleted tweet, “You are welcome to come eat regardless of your politics affiliations or views. But if you publicly display bigotry, bye,” according to Eater.

Amidst the blazing national dialogue surrounding the Covington Catholic incident, MAGA hats have become a fervent point of contention. While many on the left view them as a symbol of hate and intolerance, those on the right have often cited attitudes and policies towards wearers of the hats as proof of rampant anti-conservative bias.

It was in pursuit of the latter narrative, The Washington Post argued, that the story of López-Alt’s supposed ban was framed and reported by right-wing outlets in a dishonest way. That is, while headlines spoke of a MAGA hat ban, no ban had officially been enacted at Wursthall, nor had any customers been affected; an angry restaurant owner had simply taken to Twitter to express his political views.

Nevertheless, as media attention snowballed, so did the backlash. According to The Washington Post, Yelp was forced to disable reviews for his restaurants, while netizens on Twitter threatened to boycott both his business and his books.

Eventually, López-Alt opted to remove his tweet and issued a statement through Medium.

He began by apologizing to his co-workers, saying “Making a public statement without taking my team’s thoughts into consideration was disrespectful and reckless. My goal at Wursthall was for it to be a restaurant where all employees and staff are treated with respect and trust, and by making that public statement without your consent, I failed at that goal. I will work hard to earn back that trust.”

He went on to emphasize his pride in his mixed-race heritage — his mother is Japanese — while expressing his confusion and fear at the “anger, hatred, and violence that I’m seeing in our country right now.”

He claimed that his tweet was meant to address and reject what he perceives the hat to symbolize, “rather than at a physical object, but I understand that many interpreted my words in a different context, and construed a message of hate directed at them. This was not my intent in any way, and I am sorry for my recklessness.”

He concluded by assuring that Wursthall’s policies will remain unchanged, and that it will continue, as it always has, to “serve all customer regardless of race, color, religion, sex, national origin, sexual preference, gender orientation, disability, or political opinion — so long as they leave hate, anger, and violence outside of the doors of our restaurant.”