‘Why do we have to fit in one box?’: Chef Roy Choi on activism, representation and the best bubble tea in LA

Ahead of the Season 2 premiere of his show “Broken Bread,” celebrity chef Roy Choi spoke to NextShark about his brand of activism.

Ahead of the Season 2 premiere of his show “Broken Bread,” celebrity chef Roy Choi spoke to NextShark about his brand of activism, the pressures of representation and his journey pushing back against a single narrative.

In Season 2 of “Broken Bread,” Choi continues to focus on uplifting communities and voices that are not often heard across mainstream media, while bringing the complexity and nuance to ask difficult questions. The Emmy and James Beard-winning show explores social issues in-depth through the lens of food and community. In an episode focused on Los Angeles’ Chinatown, “Returning to Chinatown,” Choi examines gentrification in Asian American spaces and his own role and responsibility in the community as a successful celebrity restaurateur.

At the heart of the show remains Choi’s quest and commitment to keeping it real.

“I always just try to listen to my own truth and mine for the truth,” Choi said in conversation with NextShark, describing how diversity and representation were key to representing this truth. “I think in this season of ‘Broken Bread,’ the only two white people are Wolfgang [Puck] and Alice Waters in the whole show. That wasn’t intentional, but what was intentional was to make sure that I’m putting the camera in front of a real representation of what’s going on in the world.”

On Activism and Entertainment

Since the beginning of the COVID-19 pandemic and throughout the sharp increase in anti-Asian hate incidents, many Asian Americans have found a renewed urgency in their activism. Choi agrees that there has been an increased need to protect these communities. He believes there are many ways to be an activist, and he has found his role both as a storyteller and chef.

“There are different forms, and each form has its own power and its purpose. All activism doesn’t just have to be antagonistic.” For Choi, there’s power in what people do behind the scenes and in creative fields. “There’s activism that happens within writing, within storytelling, within art, within creativity. For me, my power is to nurture and to care for people and to feed people.”

Choi believes that “ugly hate” is just one contributing factor to anti-Asian sentiment and bias, but an often overlooked one is ignorance. To combat this, he says, we need to turn to forms of activism that seek to educate and include.

“Everything is not ‘break down the wall.’ Some things are, but some things are extending information, love, kindness and generosity.” 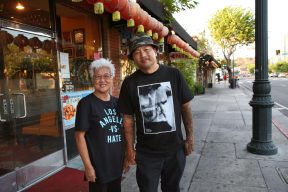 Choi rejects the idea that through his celebrity status, he somehow speaks for Asian Americans. He doesn’t feel any pressure to represent the community but rather forges his own path.

As someone who doesn’t fit neatly into preconceptions about Asian Americans, or even into some of the traditional values of Asian cultures, Choi pushes to broaden horizons rather than reinforce the same stereotypes.

“I’ve always been trying to figure out, maybe through my own struggles and examples and journeys, how I can make the path a little wider for some of us that are Asian American that don’t fit into the mold.” 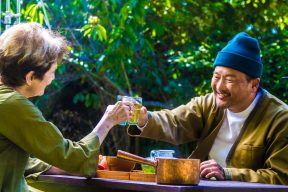 Knowing Choi’s loyalty to his hometown, LA, it’s no surprise that his favorite boba spot is in the West Coast city.

“Out here in LA, if you’re in LA, you know about Volcano Tea,” Choi says. “And Volcano Tea is the best boba shop in the city, I think. There, my go-to order is almond milk tea with half boba.”

Season 2 of “Broken Bread” premieres on Jan. 25, 2022. The series includes six episodes, which will air on Tuesdays on Tastemade and KCET. More information about the issues featured in the show, as well as episodes from Season 1, can be found on the show’s website.