Posters containing the message “Don’t let TERRORISM take over our town!” written above the image of Indian-American politician Ravi Bhalla were found plastered on doorsteps and car windshields in the local neighborhoods, reports NJ.com.

On Monday, Hoboken police released two black and white video clips of “persons of interest” caught in the act of distributing the hateful flyers.

One part shows two men walking in an unspecified location, holding stacks of papers believed to be the fliers. In the clip, which lasted about 34 seconds, one was seen dropping some of the papers outside the entrance of an apartment building.

In the second clip, which is just about 12 seconds, one of the two men was again seen carrying a stack of papers.

According to Hoboken Police Chief Kenneth Ferrante, the case is being investigated as a possible bias crime, which includes “bias intimidation” or “harassment.” He noted that the flyers were scattered mainly in the mid-town section of the Mile-Square City.

Aside from the hateful nature of the flyers’ contents, placing campaign materials on vehicles or public property in Hoboken is also illegal as it violates a city ordinance which prohibits such acts. 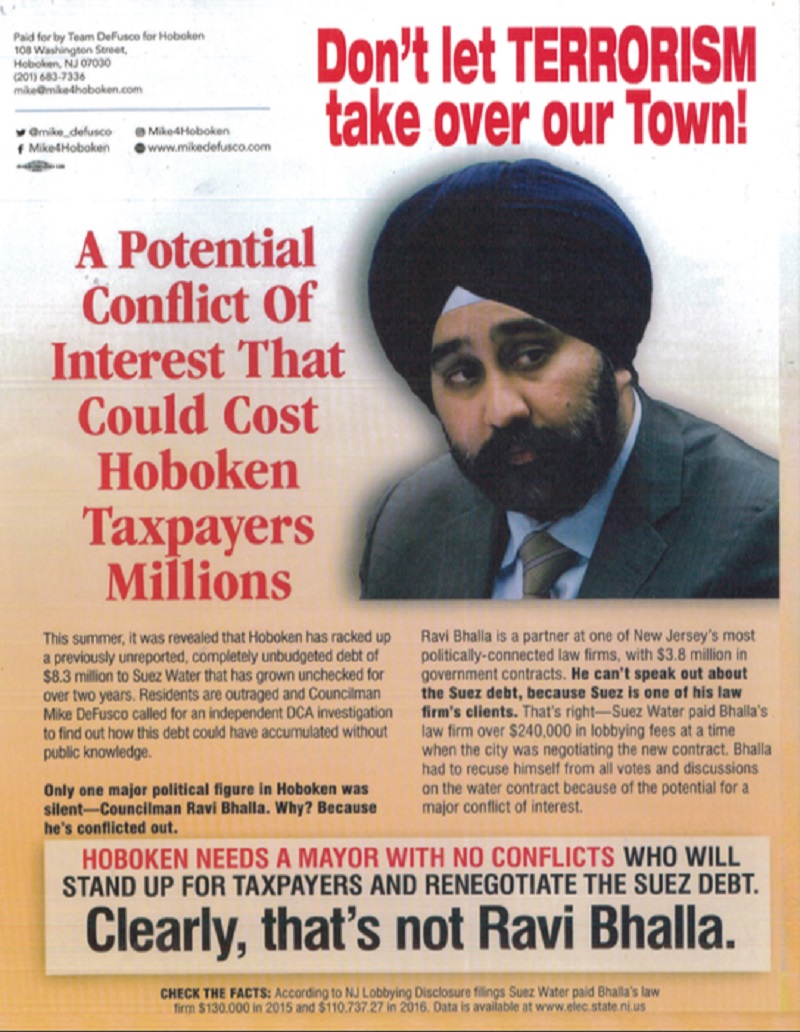 According to the police, the fliers were reportedly a modified version of an actual campaign mailer originally sent out by another mayoral candidate Michael DeFusco. The modified version added the racist remarks linking the candidate to terrorists over the flier from the DeFusco camp which originally accused Bhalla of having a conflict of interest involving his law firm and the city’s water utility.

A member of the DeFusco campaign reportedly saw the men with the flyers on Friday night and reported it to the police.

“The campaign literature now had an added portion that read ‘Don’t let TERRORISM take over our Town’ over a picture of Ravi Bhalla, another Hoboken Mayoral candidate. When Defusco campaign members realized the alarming and inappropriate change to their official campaign literature they immediately called police and began to gather up the fliers from the vehicles they were placed on.”

Yesterday, a flyer w/ word “terrorist” above a pic of me was circulated in Hob. Of course this is troubling, but we won’t let hate win. pic.twitter.com/Ri9xrYF4Al

“I want to use this as an opportunity to affirm to each other and our children the value of living in a diverse community where we are judged by the content of our character — not by the color of our skin or how we worship,” Bhalla was quoted as saying.

A similar hate campaign incident was reported last week in Edison, New Jersey where anti-Indian and anti-Chinese campaign postcards were delivered by mail to residents. Two Asian American candidates for the board of education slots were targeted in the racist campaign where the word “deport” was stamped on their images.