BTS has officially begun their media circuit after arriving in Los Angeles on November 14, appearing on American television shows such as Jimmy Kimmel and James Corden. Both Kimmel and Corden introduced the K-pop cuties as the “most popular” and “biggest” band in the world — much to the chagrin of One Direction fans everywhere.

Even though the British sensation has long since disbanded, there are diehard fans all around the world who took issue with the notion that any band could be bigger than their bias. In retaliation, they took to twitter to get the hashtag “#1DisStillTheBiggestBoyband” trending. 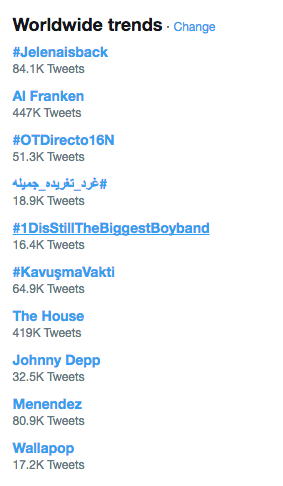 Directioners expressed their love for their favorite band alongside some disdain for their Korean counterparts.

JUST A FRIENDLY REMINDER FOR EVERYONE WHO THINKS 1D IS DEAD. GET OVER 200 AWARDS, HOLD GUINESS WORLD RECORDS, BE A BAND MEMBER AND A SOLO SINGER AT THE SAME TIME, BE SUCCESSFUL, BE YOURSELF AND THEN TALK TO ME. @ newboybandswhothinktheyrethebiggest

One Direction may not be active now but they are still considered as the biggest boy band due to all of the records had been broken. I have nothing against BTS I’m a also a stan I guess you could say BTS is the biggest Kpop band. #1DisStillTheBiggestBoyband

BTS hasn’t even performed at the AMAs yet, neither have they shown their full potential to USA, and already bitches feel threatened? 😂😂
#1DisStillTheBiggestBoyband

#1DisStillTheBiggestBoyband coming from a former directioner, i can guarantee this is false. stop whining just because artists who aren’t white are prospering, it’s embarrassing.

this tag is hilarious to read through

Ultimately, the discussion turned towards pleas for loving and accepting both groups as unique and talented bands, hoping to diffuse the fighting between Directioners and ARMYs.

One thing I don’t miss about the 1D fandom are ugly tags like this.
ANYWAYS stan both groups, each are amazing in their own way 💕(but BTS will keep you hella well fed) #1DisStillTheBiggestBoyband

#1DisStillTheBiggestBoyband
This trend is true, but BTS is great in their own ways. Directioners and ARMYs, let’s not argue, alright? Let’s choose love, and end the violence of our hearts. 💗 How about we just treat each other as friends? That would be awesome, right? ❤️💕

gad guys there is no need to compare ok? 1d is 1d and bts is bts, both have such great talent. comparing isn’t the right thing to do ok? #1DisStillTheBiggestBoyband

#1DisStillTheBiggestBoyband
Are peole really comparing BTS and 1D? Both the groups are legends stop comparing them and also stop the fanwars #stopthisdrama

What do you think? Is One Direction the biggest boy band, or has BTS usurped their thrones? Let us know in the comments!