Jimmy Wang, director of culinary innovation, on the process of creating the next big dish, authenticity, and his own go-to order.

Chef Jimmy Wang, executive director of culinary innovation at Panda Express, spoke to NextShark about the process of creating the next big dish, authenticity in the kitchen and his own go-to order.

What comes to mind looking at the circular Panda Express logo, featuring a soft, curvy panda with a blank expression popping out against a red background? For many, the zesty taste of orange chicken is synonymous with the brand. Or maybe it’s nostalgic memories of sitting in a mall food court, a scent vaguely reminiscent of Asian cuisine hanging in the air.

“Panda Express to me, is like white people’s Chinese food,” one of the video participants declares. But the video also unexpectedly highlighted a generational divide: while a lot of the younger Asian Americans critiqued the food for not being “Chinese,” the older folks seemed ambivalent about the authenticity and focused more on the taste.

Panda Express constantly has to field questions surrounding “authenticity.” Whereas other fast food brands don’t often have to worry about representing a specific culture’s cuisine, Panda Express has frequently been measured against this vague standard, especially as U.S. consumers grow more interested in seeking out “authentic” dishes.

I spoke to Chef Jimmy Wang, Panda Express’ executive director of culinary innovation, about the processes of recipe development at the company, and, of course, that idea of “authenticity” was central to our conversation.

According to Wang, what Panda Express does should be examined under that lens – American Chinese food with separate legacies and connotations to traditional Chinese cuisine.

A tale of two chickens

The best-selling dish at Panda Express, and undoubtedly the most famous of its offerings, is orange chicken. Developed in the 1980s – before Wang’s tenure at Panda Express – the chicken was inspired by flavors from Hunan Province.

I ask Wang what the appeal of the dish is, in his opinion.

“The orange chicken itself is a composition of many, many things, but it’s always been about the flavor and taste. You can consider the experience around this crispy, crunchy chicken. You taste the sauce with it, the savoriness, a little bit of sweet, a little bit of sour. There’s a great amount of aroma that goes through your nose – you can almost smell it before you eat it.”

About one-third of Panda Express customers across their 2,200 locations orders the orange chicken, according to Wang. He himself orders it as a comfort food – not necessarily his go-to order, he says, but “trust me on this, there are moments when I go in there and order double chicken. It’s like the best, most satisfying experience you can get.”

The summer of 2019 was the heyday of the fried chicken sandwich, sparked of course by the launch of Popeye’s famous menu item, which at the time was hard to get ahold of. Almost every fast food chain had their response to it, and Panda Express was no exception. They launched their Sichuan Chicken in 2019, and it seemed in many ways like the perfect response to the Southern hot chicken craze.

“If you think about it, the map of America and the map of China can overlap each other. It’s the same idea: regional differences, overlapping tastes and palates. We’re always paying attention to that. We want to see if we can find that connection,” said Wang.

With their Sichuan chicken, they were hoping to marry Southern U.S. flavors with Southern Chinese flavors.

“We’re combining a Southern favorite, a hot chicken, and then we added the regional spices of Sichuan.”

“To introduce such a unique spice, that people can now get the sensation of tingling, a little bit spicy, a little bit numbing. But it’s a little bit in the comfort of American Southern cuisine, of hot chicken.”

But the Sichuan chicken, which resembled chicken strips more than the bite-size pieces of the orange chicken, was ultimately pulled from menus in 2020. Wang said customer feedback was positive, but it wasn’t an easy dish for customers to incorporate into their everyday order.

“Our guests are used to bite-size products. In this case, we’re kind of in-between the space of snack and entree.” 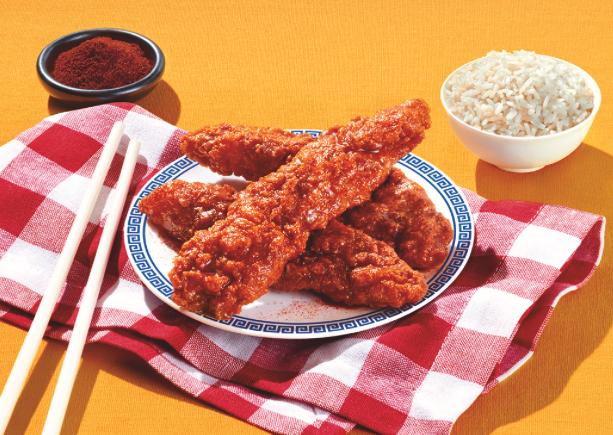 Looking for the next big thing

Wang did not seem at all discouraged that the Sichuan chicken had not ended up the resounding success that might have been imagined. There’s a lot more recipes to be developed and tested in the hopes that each one of them might become a new staple for Panda Express customers.

A Product Innovation team of 11 works on Panda Express’ recipe development. Half of them are food scientists, half of them are what Wang calls “culinarians.” They’re looking for the next winning idea, looking at current trends, thinking about what consumers might be interested in tasting, and considering how they can connect that with Chinese flavor profiles. It can take two years to have an item developed from start to finish, and only about 5% of all ideas go through the complete process to land at restaurants nationwide.

“It goes through a long process of validation and also refinement. And I want to say refinement more than validation itself.”

Besides flavor, other considerations the team takes into account include seasonality of the ingredients and, from the operations side, the viability of cooking these foods everyday at all 2,200 locations.

It might seem like a lot of pressure, but Wang describes the innovation process as a creative experience.

“For us, it’s kind of a fun formula.  It’s a composition of what we call ‘nostalgia.’ It’s about memory, it’s about emotions, it’s about those connections. It’s a part of our history. It’s looking into what the origin was, that piece of soul that we’re looking for.”

He takes pride in his work, and he says that everyone on his team does.

“We definitely take a lot of pride in standing here sharing with you about American Chinese cuisine. It’s a very unique role. It encompasses the American side that’s really around the melting pot, the cultural global influence, because that’s what America is all about. At the same time, we always trace back to Chinese origins. It is the specific spice, ingredients, technique, the regional differences.”

Perhaps the next big thing may end up being a twist on an original classic. Wang said one of their most adventurous recipes yet has been adapting orange chicken to a vegan recipe, through a collaboration with “Beyond Meat.” Referred to as “Beyond the Original Orange Chicken,” or BTOOC, it’s Panda Express’ first plant-based replacement.

“All the consumers today, they have much more diverse palates. They have a lot more food knowledge.” Panda Express is taking that all into consideration as they attempt to innovate for the future of Chinese American food. 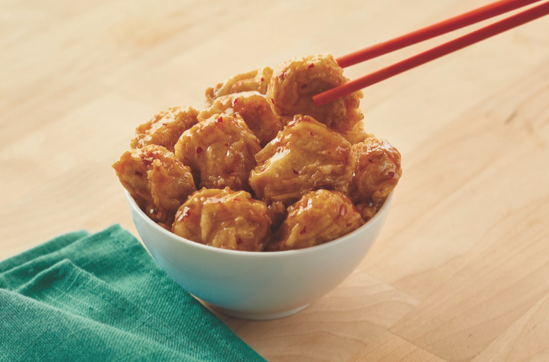 All photos via Panda Express