“You’re a shame to your race.”

“Race traitors will be the first ones to be shot on the Day of Judgement.”

Who are the hateful people making these comments? And who is this abuse aimed at? If you answered “salty Asian men” and “Asian women in a White man/Asian woman (WMAF) relationship,” chances are, you’ve seen the newest documentary by Creators for Change; however, those comments were actually made by White men towards White women in a relationship with an Asian man.

“Disgusting,” said one commenter simply when married couple Markus and Moa from Sweden posted a video of them feeding their child. “I hope this c*nt pays the toll for burning coal,” said another. Abusive comments piled up on this endearing video, culminating in some netizens going as far as to track down their address and send them death threats, calling for the “torture and extermination of the mother and baby”.

Lisa Vannetta, better known by her Twitch handle STPeach, also faces the same type of abuse hurled at her whenever she posts a video or photo featuring her Korean boyfriend.

“Burn the rice, pay the price, you sick race mixer,” said multiple commenters. “Race-mixing whore. It will be a good day when you die,” said a particularly cancerous one. Still, Vannetta and her boyfriend have said that the comments, while abusive, don’t get in the way of their love for each other. “Just do what you love, and love the person because of them,” she told NextShark in an interview. “No matter what you do in life, there will always be people trying to bring you down. Focus on yourself and continue to look forward to the future.”

The hatred is not isolated to those in Asian/White relationships; actress Tamera Mowry, athlete Serena Williams, and even soon-to-be royal Meghan Markle have all received hateful comments from netizens criticizing their choice of romantic partners, calling them “race traitors”, “sell-outs”, and even questioning their allegiance to the African-American community.

Serena Williams moved out of Compton & now decides to back it up on a White boy #Traitor pic.twitter.com/1HSJDQfZ2t

So while Natalie Tran‘s documentary points out a startling issue that Asian women in these relationships face — hatred from those with a chip on their shoulder — in truth, this is not unique to their race/gender combination, and to claim ownership of this abuse can be dangerous, especially in a public forum to outsiders of the Western-Asian community.

“I think it’s what she was familiar with,” said JT Tran, CEO and Founder of ABCs of Attraction. Tran was featured in the documentary to give his perspective regarding the hardships Asian men face in the dating arena, and after viewing the video, I knew I had to ask his thoughts on the matter. “Going off memory, the idea was to explore all the complexities and differences that encompass Asian interracial relationships. I was the first person she interviewed, so I think our conversation helped form the theme.”

So starting broad to narrowing it down, the documentary now seemed to make a bit more sense — even though the introduction positioned the focus on the abuse she and others in a WMAF relationship face from Asian men, it loosely touched on many other topics, weaving them together through multiple interviews that sometimes tenuously connected back to the introduction at best.

When I asked Tran what he thought about the idea of positioning this onslaught of online abuse Asian women face as an specifically an Asian male action — whether intentional or not — and whether this documentary was supposed to benefit Asian men in any way, Tran offered some interesting commentary. “The comments Tran has received are abusive. She’s rightfully hurt and her feelings are valid. I don’t condone that abuse in any way, and I, nor my students, engage in that behavior.”

“But as I said in the documentary, just imagine an entire generation of Asian men, as we grew up, being told by our mothers, aunts, sisters, and other Asian females around us that we’ll never stack up to White men, that we’ll never be good enough. All the comments she and other Asian women hear now, but in reverse; additionally, imagine seeing the notion that Asian men are inferior being played out in TV, movies, and other forms of media. It’s relentless, and for many Asian men, it grinds us down until we feel depressed, bitter, and angry.”

Tran tried to explain this to Natalie Tran, telling her that she would not be told that she’s not as good as others in a romantic sense, to which Natalie Tran disagreed, stating that “I definitely feel uglier than White women, like, constantly”. Of course, their words betray their different experiences — she feels inferior, while Tran is asserting that Asian men are told they’re inferior, both by Asian women and those outside their community. 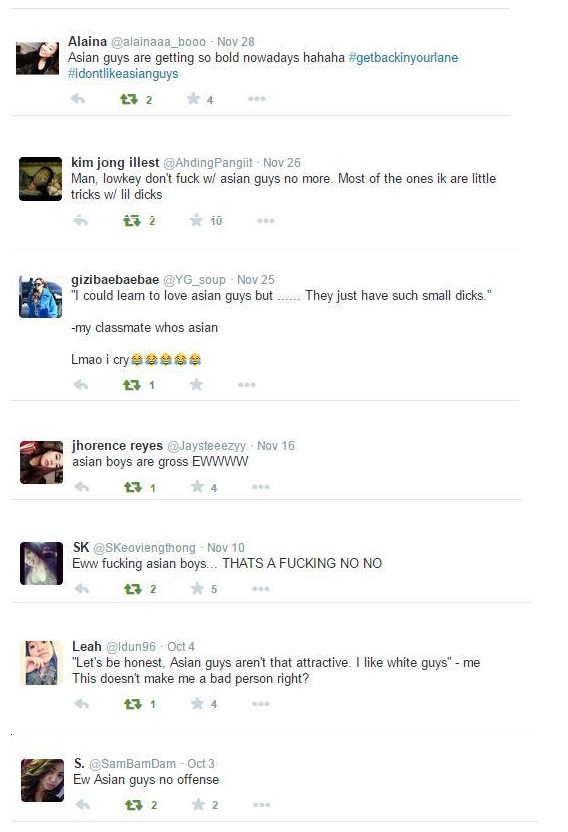 Additionally, I found it a bit ironic that, when confronted with the notion that Asian women receive White privilege-by-proxy when romantically involved with a White man, Natalie Tran dismissed the idea. “What’s the difference between White men who can’t recognize their privilege and Asian women who can’t recognize the advantages they receive when in this type of relationship?” Tran posited during our conversation. And it rings true — in other parts of the documentary, she commiserated with others about the entitlement some White men feel and how they can’t check their White privilege. How frustrating that, when placed in the same situation, she followed suit and refused to self-crit.

“I’m not getting anything extraordinary out of dating a White woman. There’s no red carpet rolled out for me, no special seat at the table. White women lack the privilege of their male counterparts that would otherwise allow me to buy into power structures, receive high-ranking positions, etc. The White woman still faces a certain level of discrimination, and so will I in this specific type of relationship,” Tran elaborated. “On the other hand, an Asian woman, should she decide to marry a White man, has access to social circles I don’t, opportunities I won’t, and even has the ability to change her last name to receive an upper hand — at least, on paper.”

That last comment is something I’ve thought about often. My name is about as White as it gets, and I used to go job-hunting with the notion that I would be hired on the spot (and feeling bummed when it didn’t happen, because it regularly occurred for me). On paper, however, an Asian last name changes me from a White woman to an Asian woman, and I suddenly experience a slight loss of that White privilege; on the other side of the coin, Asian women, who suddenly gain a White last name, become White on paper, and thus receive the benefits that I receive now. This has been proven time and time again by POC who alter their names to fight discrimination — perhaps most notably, Chloe Bennett’s name change from Chloe Wang resulting in more job opportunities for the Eurasian actress. 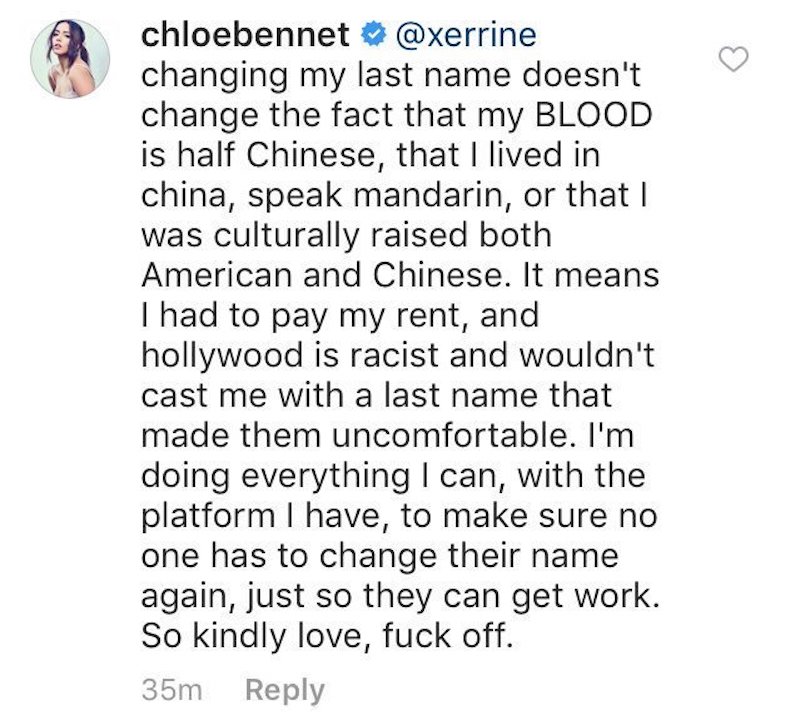 As I finished the well-made, well-intentioned documentary, I couldn’t help but feel that, despite its overall strong message, it fell a little short of its supposed goal. While it went above and beyond to humanize WMAF relationships, and there’s no real issue with that, it did little to humanize the Asian man and strengthen the Asian community as a whole. Additionally, positing the abuse Natalie Tran and others like her receive from a loud minority of Asian men for the entire non-Asian public to see as something unique to this race is disingenuous at best and dangerous character-defamation of an entire race/gender combination at worst. I highly doubt it was her intention, but she, like other Asian bloggers who make a living off pointing out what has been termed “toxic Asian masculinity”, routinely fail to attribute the behavior for what it truly is: “toxic masculinity” that can be perpetrated by men of any race.

“I don’t think it benefits the Asian man, per se,” Tran said when I asked if this was supposed to help Asian men. “I do think, however, it’s an important perspective for Asian men to understand. When Asian men display toxic forms of masculine behavior, this causes hurt. From a practical stance, lashing out at these women does not create a positive sphere of improvement for Asian men and it does nothing to change the opinions Asian women hold. It’s so easy to get stuck into our own little bubble when we’re on these online spaces, but just understand that your actions have consequences, just as their actions have had impacts on you.”

“We have every right to feel hurt and anger, but we have to understand their perspective as well.” 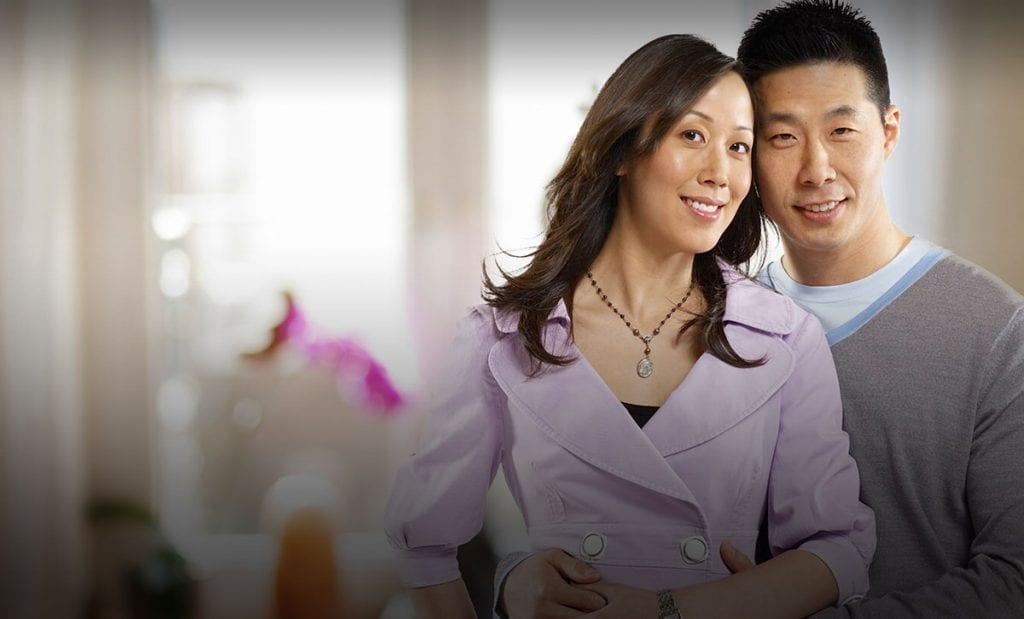 Still, I think the documentary is a must-see by the global Asian community, as it generates important discussion from both sides. But both sides must be willing to reach across to the other end of the aisle and recognize the pain the other feels and take steps to not cause further hurt. The discussion can’t end in online forums and video comment sections, however; actionable items must be realized, and the community should accept these and come together to heal the schism from within.