"Surprise, they went with a white guy."

Filipino American actor Mike Cabellon claimed in a Twitter thread on Wednesday that a third of the Asian American roles he auditioned for went to white actors.

In a prior thread on Dec. 6, the “Mr. Mayor” star questioned whether he should call out projects he’s auditioned for in which a role was written as Asian American but was given to a white actor. 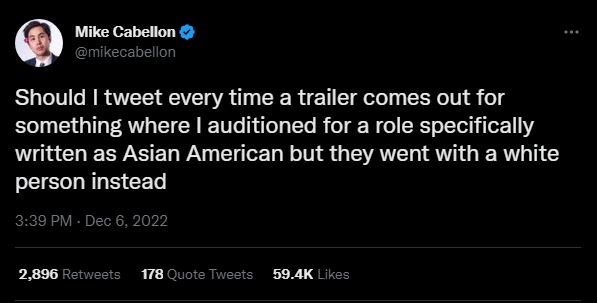 Cabellon goes on to explain that a role he had auditioned for in 2019 originally called for “an Asian actor who could also play a specific instrument very well,” although he does not specify what project he is referring to.

“… I remember thinking ‘I’ve got a good shot here, how many people could possibly fit this breakdown,'” Cabellon wrote. “Surprise, they went with a white guy.” 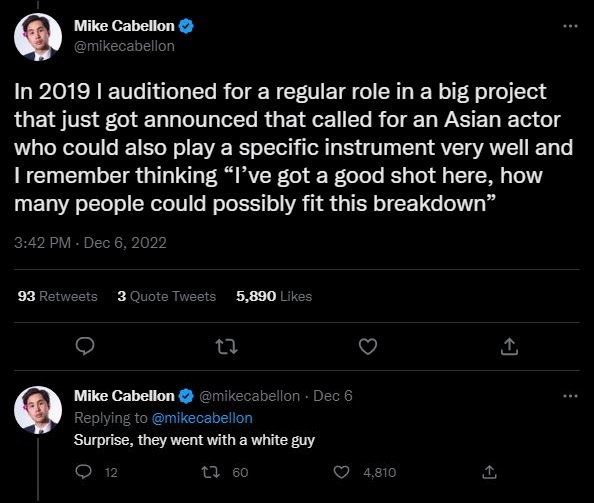 In his newest thread, Cabellon explained that after calculating all of his auditions since 2019 — minus commercials, booked and declined projects, voiceover work and things still in production — he came up with 42 auditions for roles written as Asian American characters.

Of the 42 auditions, 20 of the roles were filled by AAPI (Asian American Pacific Islander) actors. In total, 29 of the roles he auditioned for went to people of color.

“Roles that I auditioned for went to a white actor 13 times out of 42. If my math is correct, that’s ~31% of my auditions. So 1 in 3 times I’m auditioning for something, it’s going to a white person (and, in one instance, specifically to the famous executive producer’s nephew),” Cabellon explained.

According to Cabellon, six out of the 13 roles that went to white actors over AAPI actors were starring roles: three in TV series and three in feature films.

“Basically 1 in 7 roles I’m auditioning for that would SIGNIFICANTLY boost Asian representation went to a white actor,” the actor elaborated.

Speaking on the roles that did cast Asian actors, Cabellon wrote that three were cast as regulars in failed pilots and 10 of them — half of the 20 AAPI actors cast — were for guest roles, “which means you’re getting a paycheck, but you’re not exactly changing the face of representation.”