Jenny Dorsey does not merely talk a lot; she says a lot. Perhaps it's due to the amount of time she's taken out to think through the subjects we discuss over the phone for 30 minutes.

“I feel like I was put here to do this. When I cook, I feel something.”

That’s something Jenny Dorsey told me about 30 minutes into our 40 minute interview over the phone. It’s hard to pick quotes from her because she gives you so many to pull. I struggle to keep up at times; it took hours to narrow down something resembling a transcript, and now it takes longer for me to choose what to select. Nothing she tells me can be left out of this article with ease. 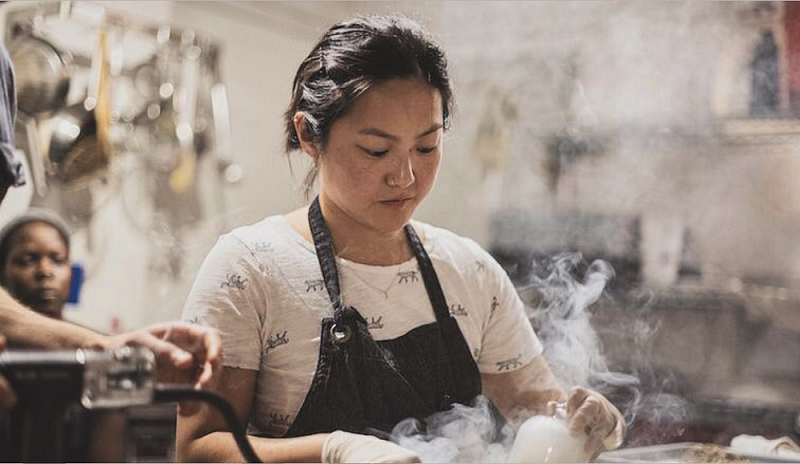 Jenny Dorsey does not merely talk a lot; she says a lot. Perhaps it’s due to the amount of time she’s taken out to think through the subjects we discuss over the phone. Perhaps it’s due to her background, an Asian American woman who was “supposed” to work in the business world; perhaps she has been forced to be careful about everything due to the doubts she’s had to combat from within and around her. Perhaps she’s just a little bit more thoughtful than other people.

Her knack for thoughtful conversation makes sense; this is the woman who creates a powerful dialogue through her food in dinners like “Asian in America,” an immersive six-course food presentation (it used to be three, but she added more stuff); who tackles subjects of prejudice through grilled celtuce and chrysanthemum puree.

But that wasn’t always her path. Once upon a time, she worked in management consulting; before she was cooking four-course meals, she avoided eating as much as she could. 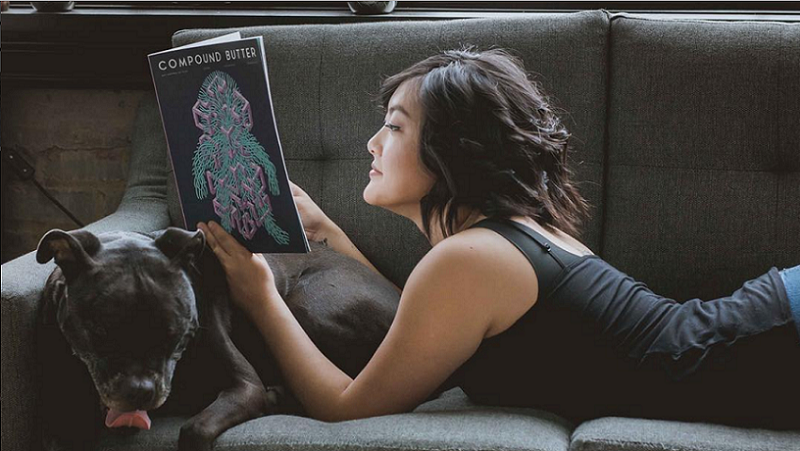 “I just forgot about food for a long time,” she said. “It resurfaced as an ugly relationship; when I was working in management consulting, I essentially became obsessed with not eating because I wanted to be thinner, to have the lifestyle all these people had. I was filling my heart and my life with random shit.”

Jenny’s creativity, though essential to her joy and the work she does now, has always been suppressed. In stark contrast to the enfants terribles of the cooking world (mostly white male savior types which she mocks in a dish comprised of ball-shaped desserts) Jenny does not have an innate confidence in her inventiveness.

“I was told at a young age, ‘You’re not creative. You shouldn’t be creative, screw creativity anyway.’ I really believe when you’re told something, you believe it, even though it’s not related to who you are.” 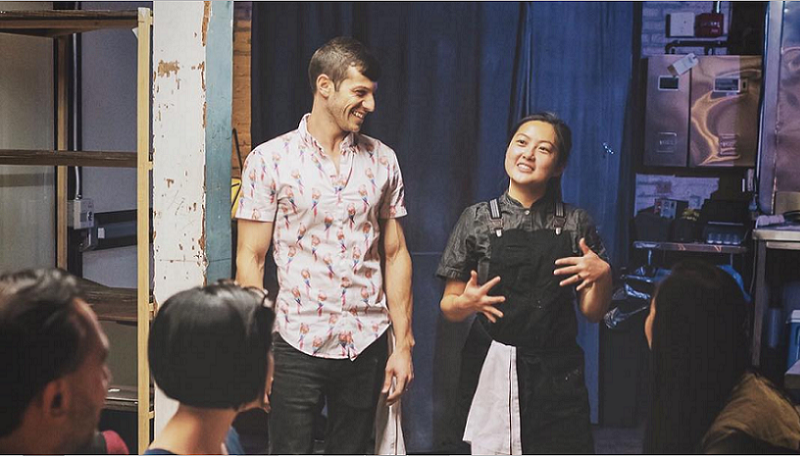 Her story is a common one for Asian Americans; struggling with restrictive, money-focused family and “model minority” stereotypes, she chose a path of practicality in the business world, hoping to please others. Even in her success, she found no satisfaction. Finally, after flunking business school, Jenny decided she’d had enough. “I was like, ‘I have to seriously reconsider what I’m doing with my life,'” she said. “I don’t want to wake up when I’m seventy years old and be like, ‘Shit. I lived my life for my parents.'”

She’s now the head of Studio ATAO, a non-profit that “creates multi-platform, impact driven culinary content & experiences,” according to their website. Their portfolio of dining projects includes “Ultimate First Date,” which pushed pairs of diners to converse about “everything from God to eugenics,” and a presentation in Nicaragua which profiled the Latin American country’s food culture. It’s obvious from first glance that this work constitutes way more than food; the dinners include immersive poetry, videography, and virtual reality devices.

Their latest project is “Asian in America,” lead by Dorsey, with beverages from her husband, Matt Dorsey, VR presentations by Karen Vanderpool and sticker illustrations by Felicia Liang. It’s gone to six different locations, with the latest and last of the year coming at the Museum of Chinese in America in December. Jenny, who writes extensively and openly about her work through Instagram and Medium, is engendering powerful conversations through very personal work.

“Through all of this has been; what is my identity?” she tells me. “How do I deal with not only being Asian American in the current climate which is quite hostile, looking back and realizing how much otherism is ingrained in how I grew up and how much of that I internalized?”

Her goal isn’t necessarily to save the world or dismantle any particular unjust policy; she is an artist, not an activist (in this regard) and as such, her main goal is to make people uncomfortable; to force discussions that cause people to reflect in abnormal ways. Yes, you’ll want to eat her food, but her peers and competitors are not merely other chefs; they are artists, and works of art.

As you’ll well know if you read NextShark, 2018 has been a year for the expansion of Asian Americans’ roles in media, particularly in front of the camera. Films like “Crazy Rich Asians” and “Searching” do a lot for representation and the dialogue that surrounds it; Jenny Dorsey and her team are expanding off that.

“I think the message of Asian in America is there is no finite answer, there’s no conclusion, nothing is wrapped up nicely in a bow because this is still an ongoing issue that many of us are dealing with and continue to deal with,” she says. “Even though Asians have had a really great year in the U.S., implicit cultural hierarchies are still baked into how we live every day.”

The course includes dishes like “You Make Asian Food, Right?” based on her experiences of people assuming exactly what kind of chef she is because of her ethnic identity. That dish is made of handmade black sesame and flour rye pasta, cherrystone clams, habanero; some elements which, yes, derive from her cultural background and the perspective she holds of it, but others that are unique to her experiences, that seemingly have no connection to Asian identity. “It’s topped with habanero chutney,” she says in her Medium blog, “A recipe I learned while I was in Port-Au-Prince, Haiti helping Blue Marble Dreams and Haiti 155 open up an ice cream shop two years ago.”

“I think growing up, so many of the microaggressions or large aggressions, I think I internalized a lot of them,” she tells me. Her experiences in the culinary world colored her perspective; often, the prejudiced hivemind she encountered turned her off, though she struggled to find the resolve to do something about it.

“If people told me Chinese food was gross and cheap, I would be like ‘Yeah, I agree,’ because I wanted to be accepted. There were no other voices saying differently. There was not a single Chinese instructor in my culinary school to teach me or say anything nice about Chinese people. Everyone around you, including people who look like you, are telling you this is the right way. A lot of women will tell you: women voted against women having suffrage rights.” 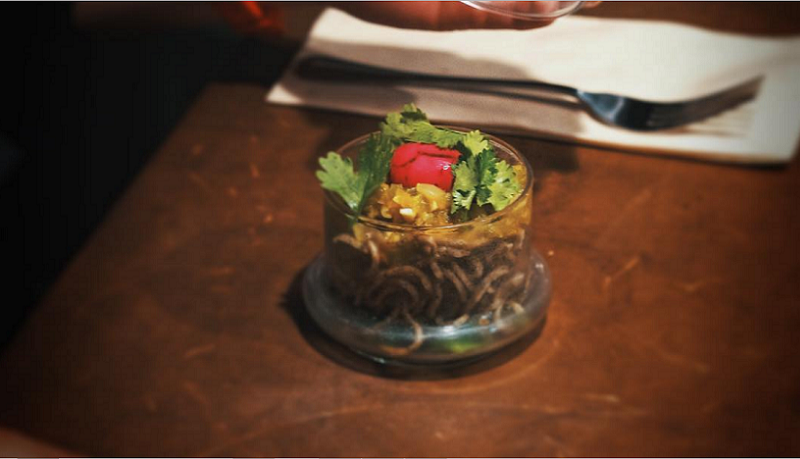 Indeed, while Jenny says a lot of things towards white ignorance, she is also fighting against internalized biases within the Asian community. “It’s not just other people who put stereotypes on Asian Americans. Asian Americans put stereotypes on ourselves. At Drunken Dumpling in East Village, if you look at the Yelp reviews, half the reviews are Asian people bitching about how expensive it is. And those same people will be like ‘Nobody ever cares about Asian cuisine! They don’t think it has value!’ There’s a lot to untangle there.”

Her search to speak the truth about oppression is not a unilateral placement of blame. She seeks not to cancel or to narrow-mindedly define an oppressor or even a straight-forward form of oppression. Her goal is representation, recognition, reflection and reform. “I think all of us have been complicit in a lot of the problems in this country, and we’re starting to realize ‘That’s okay.’ People change, we can all improve, but we can’t improve until we take a hard look at ourselves and the people around us and make a change.”

This is a kind of hopeful, outreaching art that is vastly needed in a world wherein the appearance of singular issues can be enough for social media to create pseudo-crusades. When we sit and begin to digest how far-reaching oppression is in the world around us, from the exploitative nature of our economy to the divisiveness in our politics, we are forced not only as Asian Americans but as humans to recognize certain truths: that everything is interconnected and, while wrongdoing must be punished, no-one is entirely innocent.

“That’s how change happens. Change doesn’t happen from you yelling at people and telling them to feel a certain way. It’s about them having the space to re-evaluate who they are.”

Jenny Dorsey’s philosophy is simple: change happens within the self. No one person will ever get it completely right; we are all imperfect, and we are all meant to focus on our own needs before the needs of others. But in order for us to at least move from a dark political moment and force the betterment of our nation, we have to start within ourselves. Good art moves us to do just that; it makes us uncomfortable with something, and it forces us to reckon with that discomfort by ourselves. The irony is that food, which is naturally meant to sustain and fulfill humans, is Dorsey’s weapon to do just the opposite. Her food might sustain your stomach, it might curb your appetite, but it will keep you starving for answers; it will empty your soul.

Jenny was forced to do this in her own life. She searched desperately for fulfillment through attempting to fulfill others. She starved herself physically to fulfill some need to fit in. She spent most of her life trying to satisfy the demands of a society that needs to change so much about itself and seems so far from ever doing so. Now, though she’ll never delete her past, Jenny is as free as she’s ever been. She is expressing herself more quickly and profoundly than others can handle. And she is finding meaning through bringing others to transform themselves.

“People are like, they’re not on their phones,” she tells me of her attendees. “They’re just sitting, and they’re quiet, and they’re thinking.” 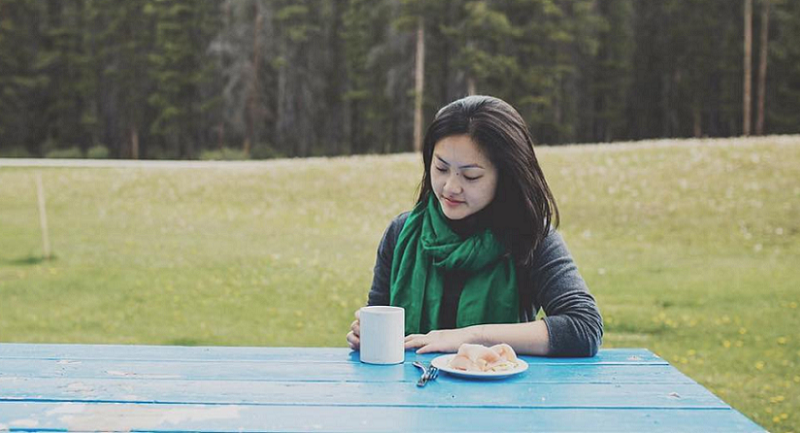 You can purchase tickets to “Asian in America,” coming December 7 to the Museum of Chinese in America, here.