‘What is control? What is real?’: ‘The Matrix Resurrections’ cast hint at life in a simulation

It’s been over 20 years since “The Matrix” was released, immediately earning its spot as one of the most iconic films in history.

It’s been over 20 years since “The Matrix” first took over our screens, immediately earning its spot as one of the most iconic films in cinematic history.

“The Matrix Resurrections” marks the modern, meta return of sleek, full-body suits; all-black trench coats and polarized sunglasses, calling back to the days we marveled at revolutionary “bullet time” graphics and pondered the illusion of choice.

Warning: Contains spoilers for those who have not seen the original trilogy.

A Glitch in the Matrix

Neo and Trinity concluded the original trilogy by taking a one-way trip to the Machine City, where they sacrificed themselves to ensure the remainder of humanity could live on. So how does Thomas Anderson find his way back into the Matrix, ingesting blue pills by the fistful as his love-turned-stranger passes him daily like déjà vu? While “Resurrections” invites you down the rabbit hole once again, lead actor Keanu Reeves, who reprised his role as Neo, tells NextShark “it’s not a direct lineage to the end of the trilogy.”

“It’s an evolution, but completely different, and some things are the same, but for the most part, they’re (Neo and Trinity) rediscovering.”

“Matrix” co-creator and “Resurrections” director Lana Wachowski said the idea for the much anticipated fourth installment came after the death of her parents. The loss was so palpable that one night she revived the long since put-to-rest characters, whom she still held dearly in her heart, and started writing “a story that would be soothing.”

The vital players who have been touched by the “Matrix” believe in the subversive impact it has had on their lives and the thought-provoking effect that persistently ripples across the ever-transforming tech world. In true “Matrix” fashion, the fourth installment’s exposition is dense and requires your attention.

As an audience member peering through the looking glass, Reeves’ co-star Carrie-Ann Moss, who reprised her role as Neo’s love interest Trinity, says it continues to open her mind as she integrates the films’ philosophies. “What is control? What is the Matrix? What is real? All of that kind of inquiry into life.”

“I love that this movie now brings all of that history of those three movies and yet completely meets us right here,” Moss says. “That’s fun, like in the scenes where you’re feeling that the moments are there and yet, the past is coloring that.”

A new era, a new revolution. Actors Priyanka Chopra, Yahya Abdul-Mateen II and Jessica Henwick all join the original cast as the adult version of sentient program Sati, an alternate Morpheus and human survivor Bugs, respectively. All three roles, played by actors of color, serve as vital guides to the tired, simulation veteran Neo, and without them there wouldn’t be a “Resurrections” movie.

The Wachowskis have long been proponents of cultural authenticity — specifically, non-caricatured representations of Eastern influence and diversity, such as in the case of the movies’ Hong Kong-inspired martial arts. The sisters have proven that they can more than direct an internationally inclusive cast and crew after the success of the globe-trotting, neurally-synced characters in the Netflix phenomenon “Sense8.”

Chopra, who is Indian, says South Asian talent is something she wants to see more of behind the camera as well as in front of it. Rather than being an exception, she aims to pave the way for more budding South Asian actors in Hollywood and hopes they don’t inherit the barriers to entry she faced. She recalls having to “pound the pavement and reeducate people and say, ‘I could do it too you know.’”

The Future of Both Worlds

Since 1999, “The Matrix” IP has been a catalyst for innovation, especially in the era of the dot-com boom.

For both the younger, tech-savvy, digitally-dependent generations and the ‘90s dreamers for whom computers were only just becoming commonplace household tools, Abdul-Mateen II understands the appeal of the series.

“I have a 6-month-old niece who knows how to find the camera, a 2-year-old who knows how to pull it up and go to their favorite videos and things like that. Our Matrix is speaking to those audiences, but also it’s sort of nostalgic for a time of human-connection.”

While being interviewed, Abdul-Mateen II, Chopra and Henwick all burst into laughter as they discussed floppy disks and how late in life they received their first cell phones (Henwick, the youngest at 16, Chopra at 18 and Abdul-Mateen II between 18 to 19). 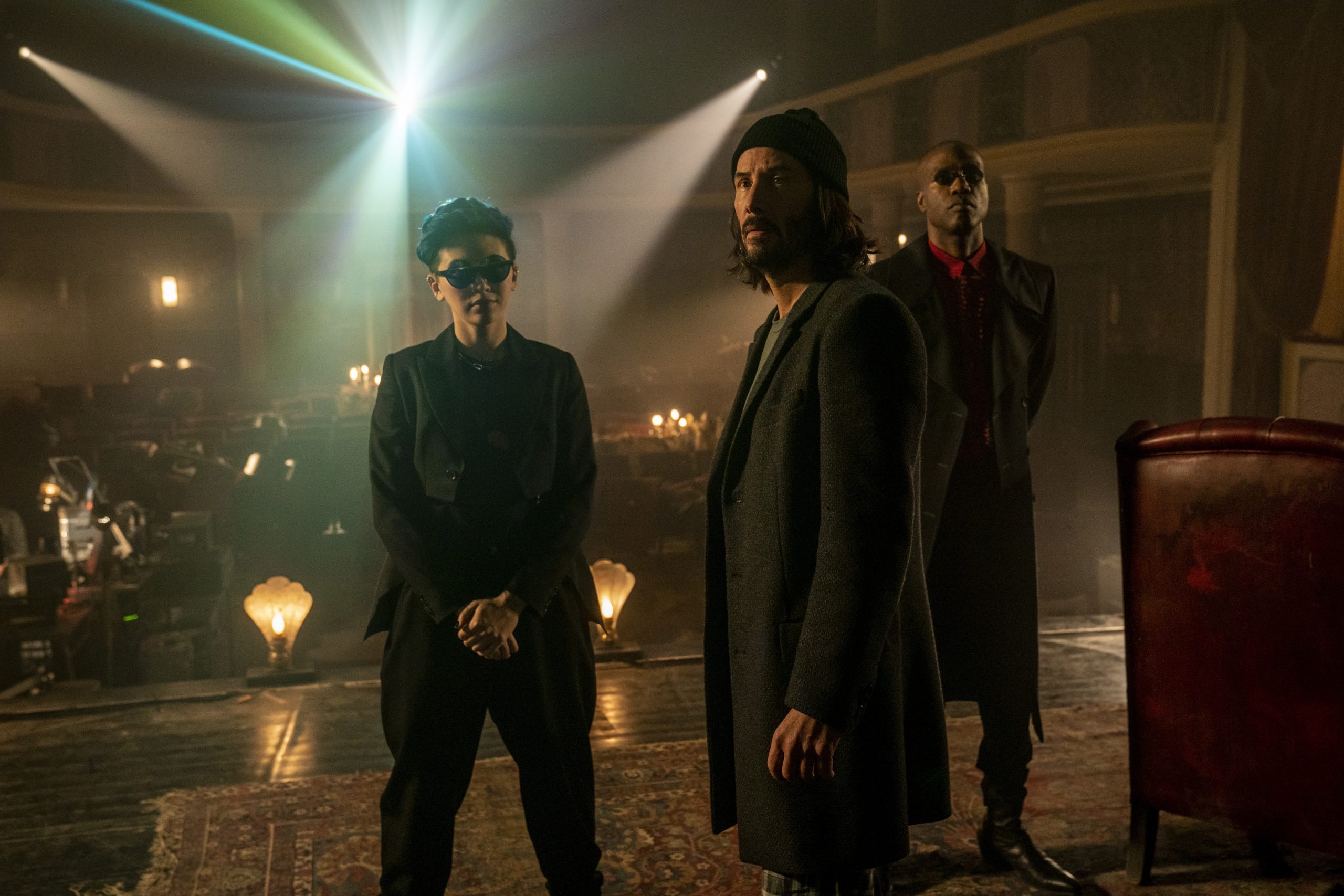 “Resurrections” tackles the many questions its predecessors left open-ended, including what happened to mankind and the dystopia that is Machine City. It continues to explore the inescapable link between humans and technology as both continue to evolve.

“It’ll be an education in the way things used to be and the difficulty using that outdated technology,” Abdul-Mateen II says. “I think that it may be a bit at the core, it may be a bit jarring, or it may be welcoming at the same time, to talk about themes of separation from the machines and entering into a world of human-to-human emotion and contact and freedom.”

Shooting throughout a pandemic, Henwick further points out, meant the cast and crew were practically in pods of their own, further highlighting the psychological wall effects of social isolation. While the cast was “providing escapism,” she says, those on the other side of the screen were perpetually “consuming” their performances.

It’s a description that sounds all too eerily similar to that of pods of unconscious human batteries trapped in goo.

“The Matrix Resurrections” will be available to watch in theaters on Dec. 22 and on HBO Max through its Ad-Free plan for 31 days following the theatrical release.

All images via Warner Bros.