She’s the Cleanest Person in the World

An exclusive interview with Marie Kondo, author of bestselling book "The Life-Changing Magic of Tidying Up: The Japanese Art of Decluttering and Organizing".

I’m far from a clean person. In fact, I drive my fiancée insane with how messy I am. I’ve always been like this and I think many others can relate.

I’ve tried spending a whole day cleaning things up, but no matter what I do, my surroundings always end up cluttered, as if a whirlwind had randomly appeared inside my apartment.

Over time, I accepted that this is just the type of person I am and will just have to deal with it.

Until I met Marie Kondo. 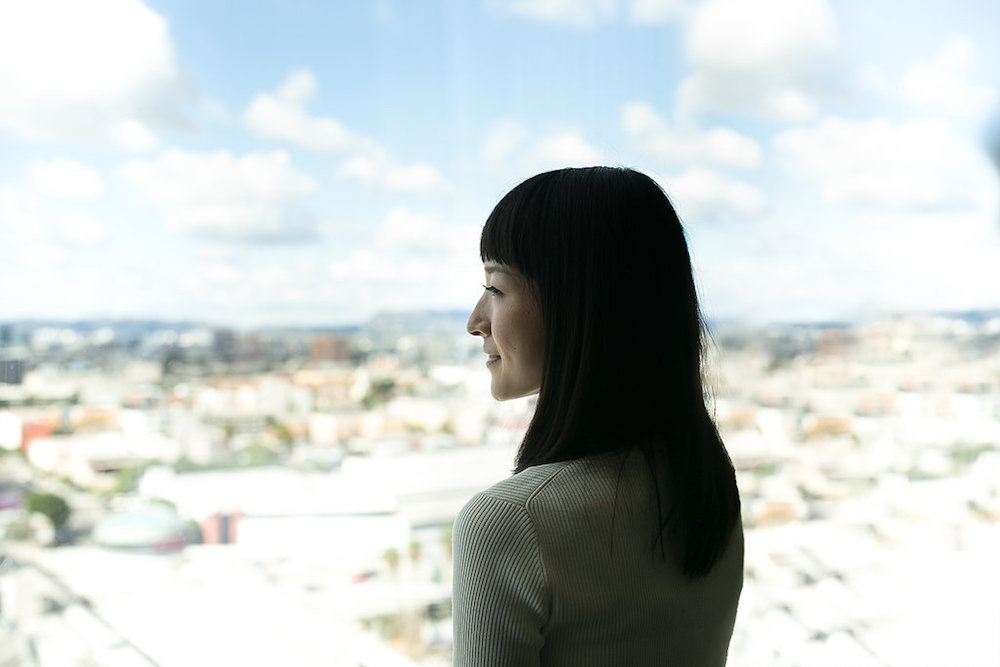 This woman has single-handedly changed the way I approach cleaning — and I’m not the only one. Her book, “The Life-Changing Magic of Tidying Up” (2010), has sold over 6 million copies worldwide. In 2015, Kondo was listed as one of Time’s “100 most influential people”.

But even then, I still wasn’t sure whether she was the real deal. So we introduced her book to my fiancée’s sister, who’s known in the family for her untidiness. After reading her book, the results below speak for themselves. 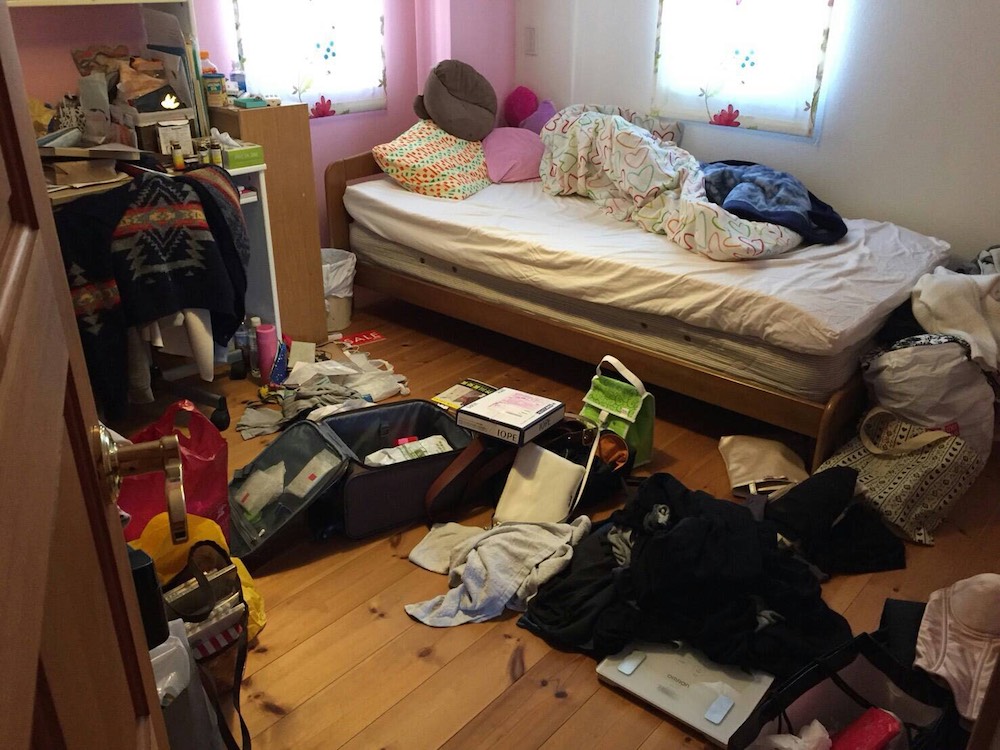 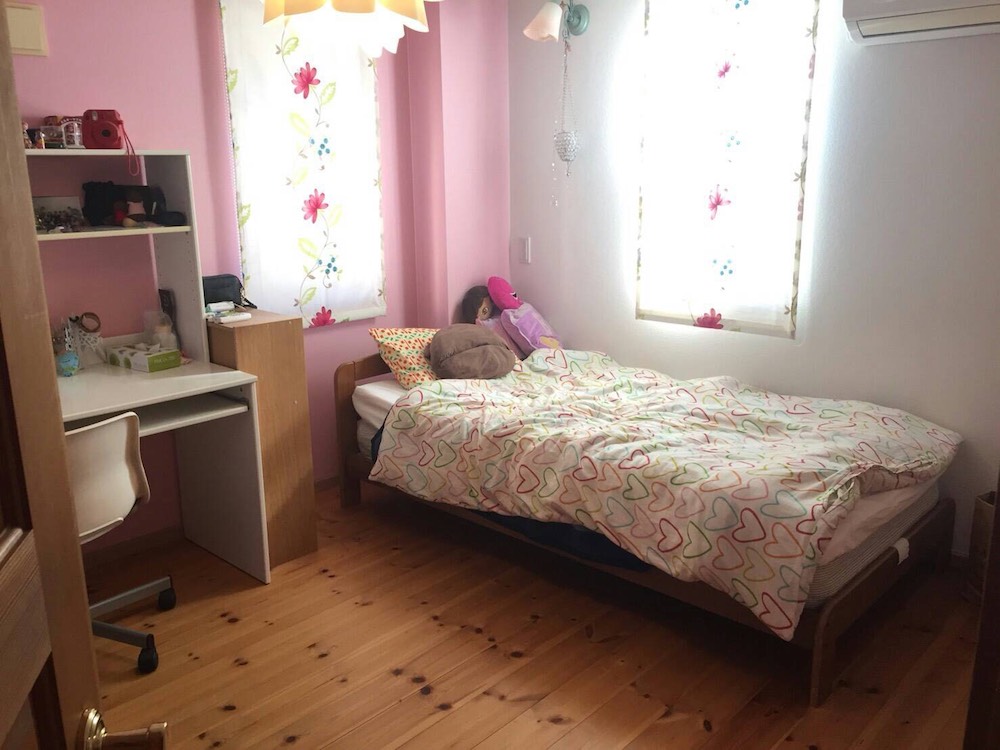 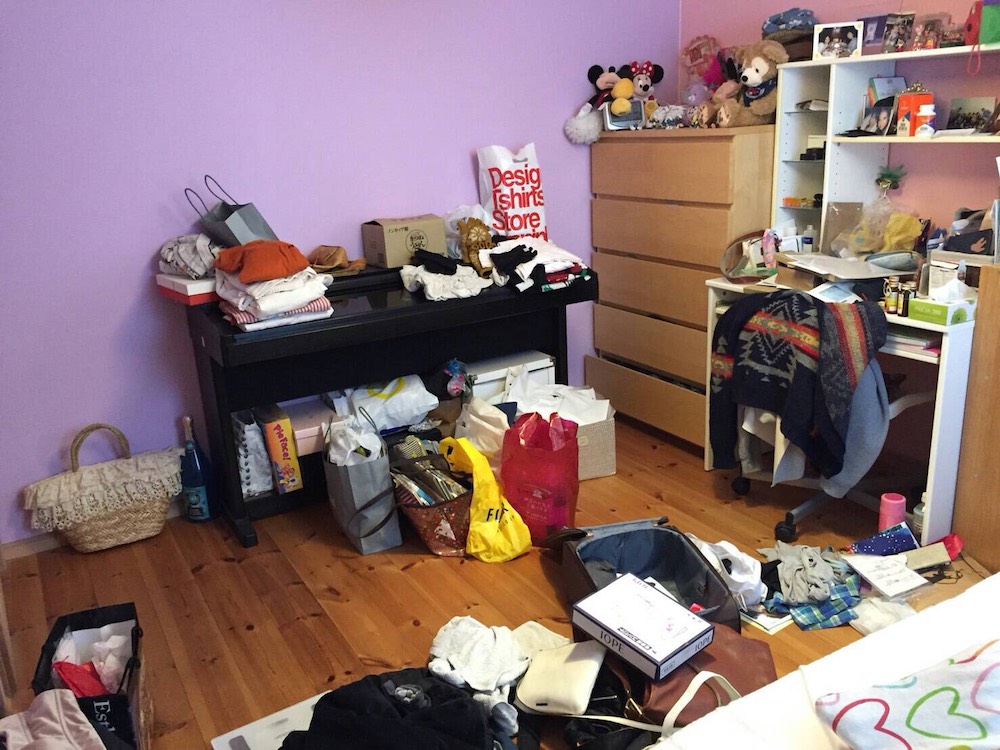 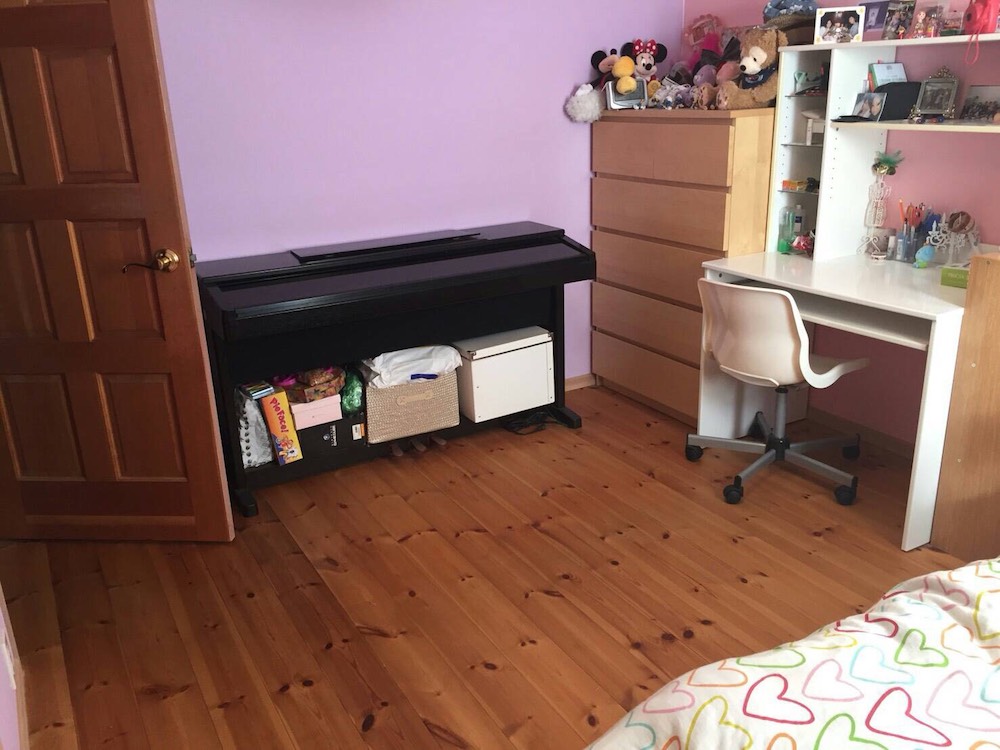 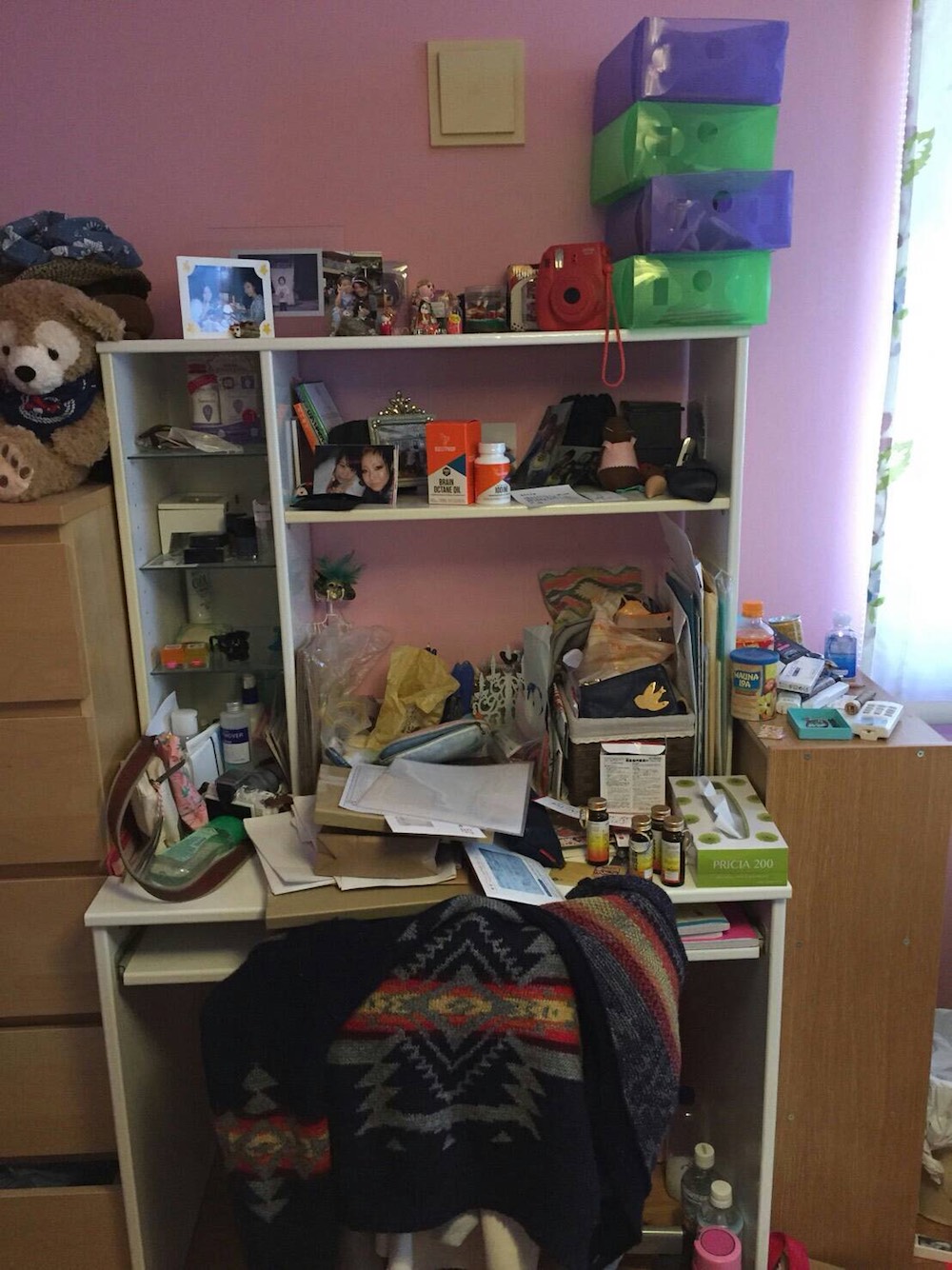 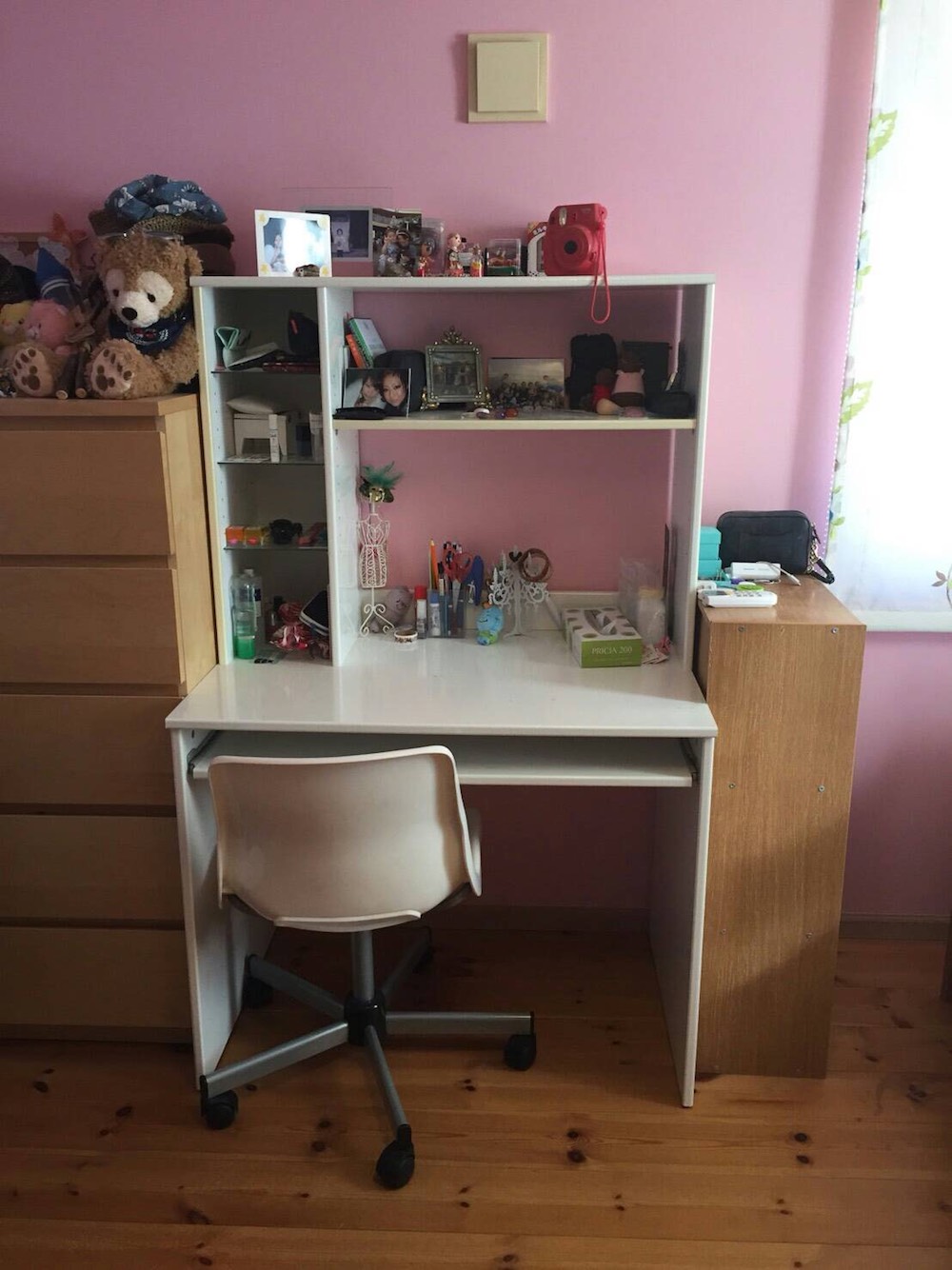 The kicker? It’s been MONTHS since and she hasn’t relapsed to her old ways at all — and so do the many others who call themselves “Konverts”.

Kondo discovered her passion for tidying up when she was 5 years old. During elementary school, she would often be found in the classroom organizing bookshelves while her classmates played outside.

“Every day after school, my favorite thing was to tidy up, which meant that I continued to throw things away everyday in the house,” Kondo told NextShark. “It lead to me to forget the importance of appreciating objects.” 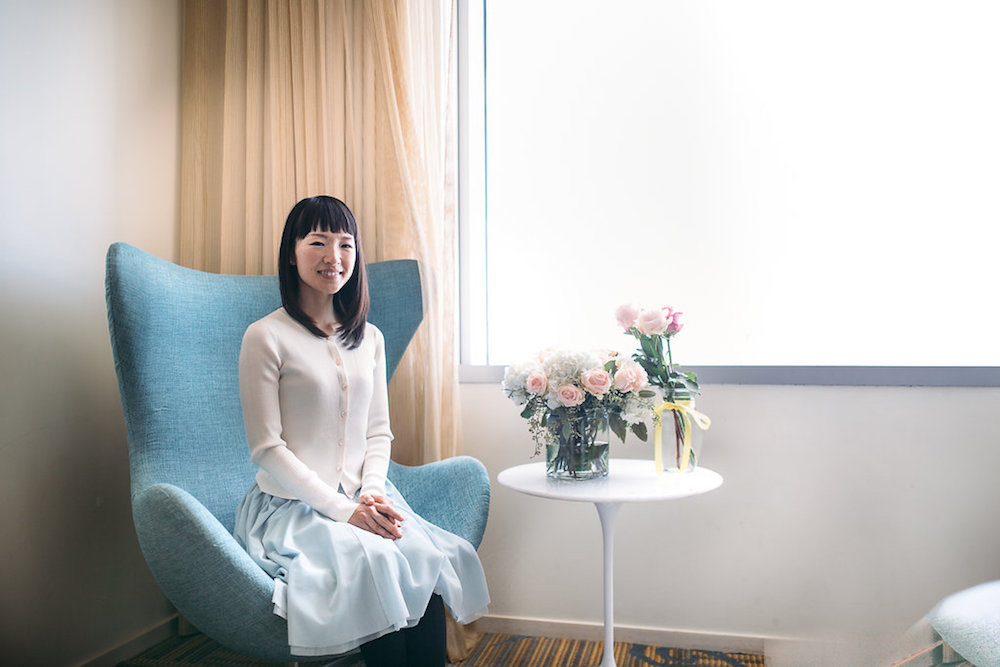 This experience put Kondo under a lot of stress. She was judging objects based on how old and dirty it looked, admitting that she was finding anything wrong with the objects and throwing them away. Kondo became so stressed out that she passed out at one point in class during high school.

“When I woke up from that, I realized my way of tidying up was all wrong,” she said.

“Up until then, I was looking for things to throw away, but what was actually important were things that I kept.

“Out of all the things I own, I just needed to select and keep the ones that make me happy or spark joy by having them around. That’s when I realized that it was important to cherish my belongings.” 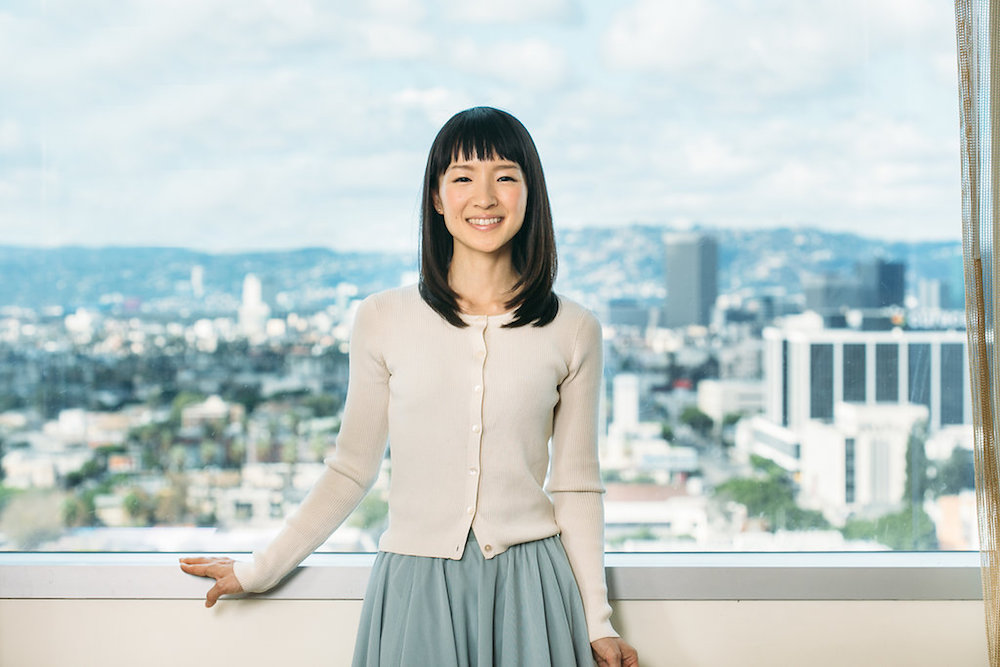 Kondo’s epiphany became the groundwork for her approach to cleaning. Instead of simply finding reasons to throw things away, she started judging objects based on whether it “sparked joy”. If it did, she’d keep it — if not, she’d throw it out. However, she advises people to not get too caught up with the meaning of “spark joy”.

At 18, Kondo got a part-time job as a maiden at a Shinto shrine. Her job was to keep everything clean and work the register.

“When you go to a shrine and pass the gateway, you feel refreshed and may wonder why,” she explained. “The reason is because it’s always been tidied up and cleaned with care. I think that you can turn your house into that similar space.”

She worked there for the next five years while studying sociology in college. During that time, she wrote a thesis titled “How to Declutter Your Apartment — From a Sociological Perspective”. Eventually, she became a consultant, where she’d help others tidy up their homes.

Her business was a huge success. Kondo got so many clients that she racked up month-long waiting-lists. In 2010, Kondo decided to write a book to make her methods more accessible. She wrote “The Life-Changing Magic of Tidying Up” in just three months and published it that very year. 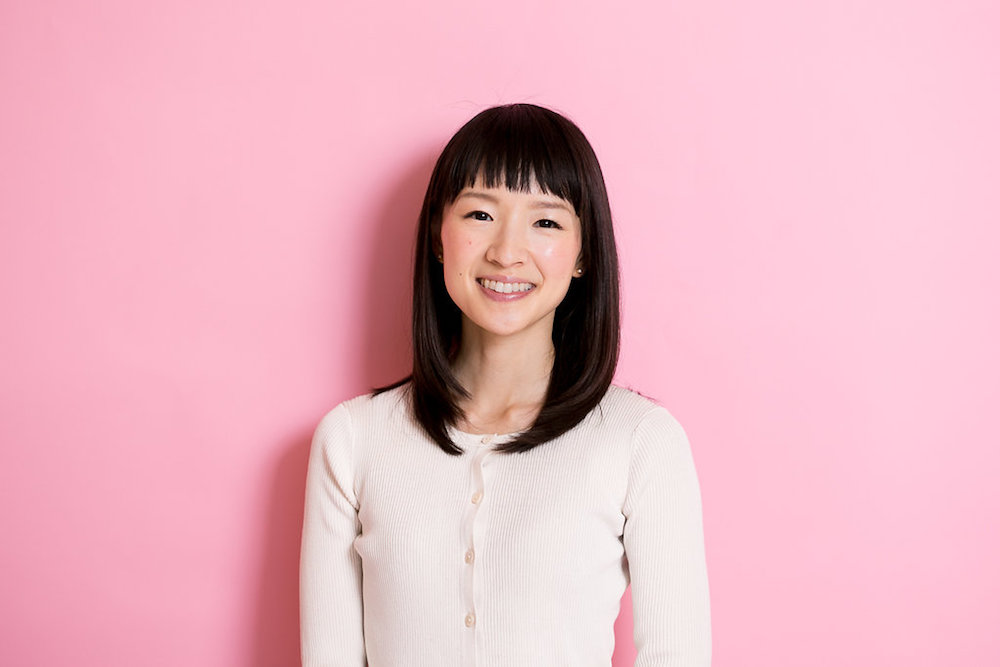 Sales were modest up until 2011, when Japan was hit with a 9.1 earthquake and tsunami — the strongest earthquake to ever hit Japan, which took nearly 20,000 lives and caused $300 million in damages. While this was a terrible tragedy that affected the entire country, it had somewhat of a silver lining for Marie Kondo.

From then on, Kondo’s book exploded, putting the “KonMarie” brand on the map. Since then, Marie Kondo, now 32, has built an empire and regularly flies around the world giving talks and making television appearances. 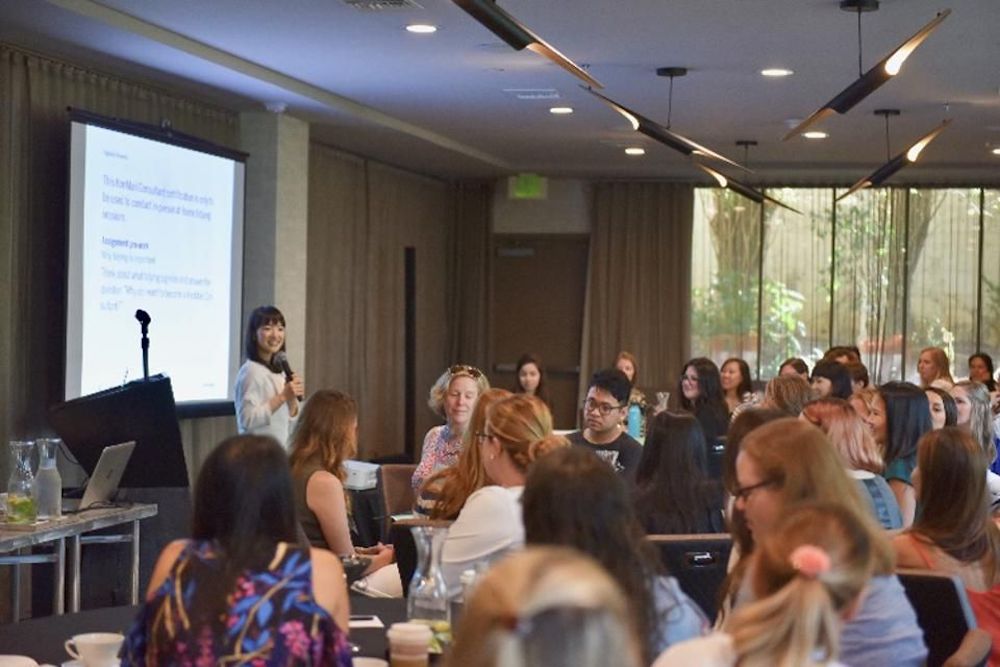 Like many people in Japan, Kondo is influenced by Shintoism, a Japanese way of life which believes in animism, the notion that animate and inanimate objects have spirits or souls that are worshipped. However, experts argue that animism in Shintoism is now outdated.

In Kondo’s case, the first thing she does when she enters a client’s home for the first time is to take about two minutes to greet the house, while stating her name, birthday, and job title. Before she takes the stage at a talk, she greets the place she’s in and introduces herself. She believes that these rituals will make her job easier and smoother. 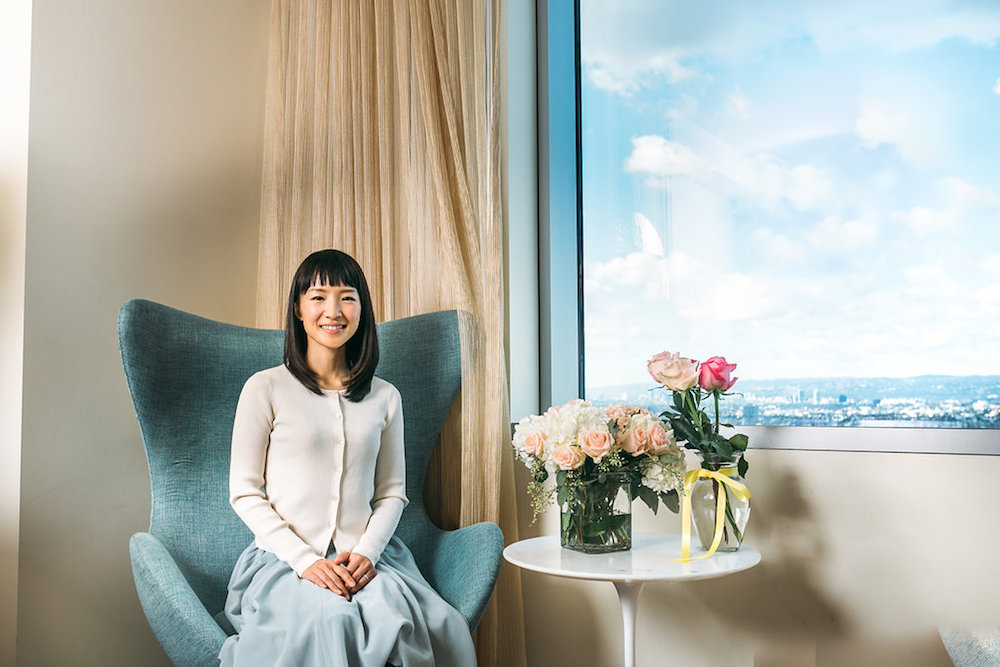 Additionally, she teaches her clients to thank the objects for their services before throwing them away, regardless of what kind of feelings they spark. Her practice of treating her belongings as if they were alive started when she was in high school. According to an excerpt in her book:

“I know some people find it hard to believe that inanimate objects respond to human emotion, and it could indeed just have been coincidence. Still, we often hear about athletes who take loving care of their sports gear, treating it almost as if it were sacred. I think the athletes instinctively sense the power of these objects. If we treated all things we use in our daily life, whether it is our computer, our handbag, or our pens and pencils, with the same care that athletes give to their equipment, we could greatly increase the number of dependable ‘supporters’ in our lives. The act of possessing is a very natural part of our daily life, not something reserved for some special match or contest.”

Hearing the words “tidying up” can be overwhelming for someone who isn’t used to being tidy, but Kondo advises that a shift in your mindset could change things entirely.

“I don’t want you to think of it as just cleaning the house, but rather a life-changing project to find out what’s truly important to you,” she said

“In KonMari method, what we primarily focus on is to choose what sparks joy. Whatever you have in the house, evaluate them individually and ask yourself if this particular object makes you happy or sparks joy.”

“Having a mindset like ‘this will make my life so much better’ will make tidying more effective,” she added.

As far as the exact practices to keep in mind when you begin your tidying adventure, Kondo has a few tips:

Hanging your clothes is not efficient and often takes up a lot of space. Kondo advises that folding your clothes in a dresser will make your clothes “happier”. She credits this notion to te-ate, the Japanese word for healing, which literally means “apply hands”. It’s based on the traditional belief that applying hands on an injury will promote healing. Marie Kondo believes that the act of folding transmits positive energies into the clothing.

Folding clothes and storing them upright will allow you to easily see all the colors you own in one go to avoid buying duplicates. In addition, folding and storing your clothes properly will also prevent wrinkles.

Get rid of gifts and memorabilia that don’t spark joy.

Sometimes it doesn’t feel right getting rid of things because it was either a gift or a keepsake from your past. However, it they don’t spark joy when you hold them, then it’s time to part with it. Kondo says thanking the person who gave it to you and the item for its duty before getting rid of it will help rid the guilt.

Getting rid of stuffed animals that don’t spark joy

“The reason why you’re hesitant to throw them away is because it feels like they’re living,” Kondo told NextShark.

“The reason why it feels that way is because they have eyes. You feel like they are staring at you or somehow they have souls of their own. That’s why it’s harder to throw them away.

“When you’re throwing them away, the key is to cover their eyes and then dispose.

“In Japan, we have trash bags that are transparent so that’s not something you want to use when throwing away stuffed animals.  You feel like they’re looking at you as they are being thrown away. It’s likely to become an emotional burden. That’s why it’s helpful to cover their eyes before throwing them away.

“In Japan, there are shrines that hold memorial services for stuffed animals and dolls. They also cover their eyes and it’s one of the rules to do so.”

Kondo’s method is far more than just about being clean and tidy. As people, we tend to hold on to things in our lives without questioning why we keep them around in the first place. It reminds you to rid the negative forces in your life and focus on what’s truly important.

“After you finish tidying up, you’ll be able to make better choices not only for your belongings, but also for your job, relationships, or anything else you may need to make decisions in life.”

As Kondo summarizes in her book, “Every object has a different role to play. Not all clothes have come to you to be worn threadbare. It is the same with people. Not every person you meet in life will become a close friend or lover. Some you will find hard to get along with or impossible to like. But these people, too, teach you the precious lesson of who you do like, so that you will appreciate those special people even more.”