A refreshing story about how true love softened an Asian “tough guy” has captured the hearts of many on social media.

Sonja Feit Wang recently shared on the Subtle Asian Traits Facebook group about the story of how first meeting a “cocky” young Asian man in the late 80s blossomed into a lasting romance.

In her post, Sonja wrote about how she met her future husband Teddy during “the third day of freshman year of college” back in 1989.

“His friend (who was a big white guy and a rugby player) saw my friend and I in the lounge and said there are ‘hot girls’ and to go get them to come to their party, because he was too scared to make the move,” Sonja narrated. “Teddy, my future husband, strolled in with his long hair and tie dyed t-shirt and got us to come. I thought he was cocky and an a$$hole that night, but we wound up together eventually.”

Sonja and Teddy got married and had their first child in 1996. The happy couple would eventually have two sons later on in their marriage. 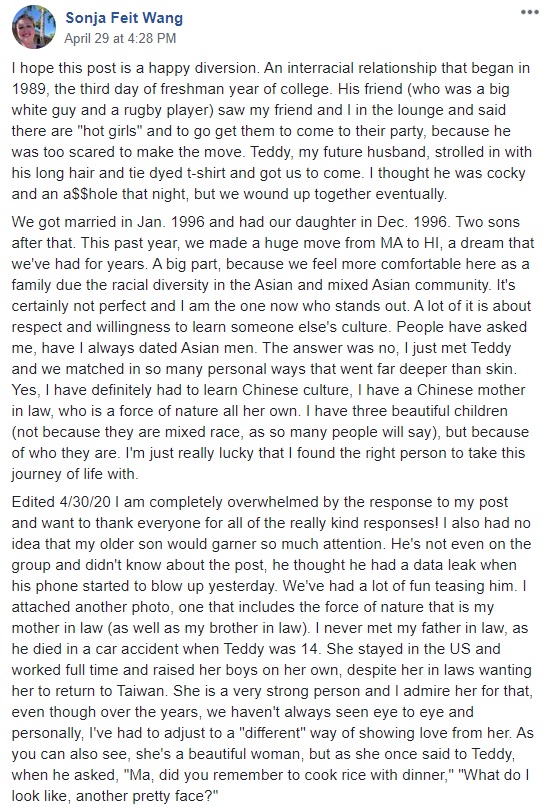 Sonja revealed to NextShark how she came to understand Teddy’s “tough guy” persona early on.

“This was an extension of how he probably acted in high school. His father died in a car accident when he was 14. The school/community didn’t do anything to help him and his brother cope emotionally. His mother, who was working a lot of hours, tried to control him but she really couldn’t.” 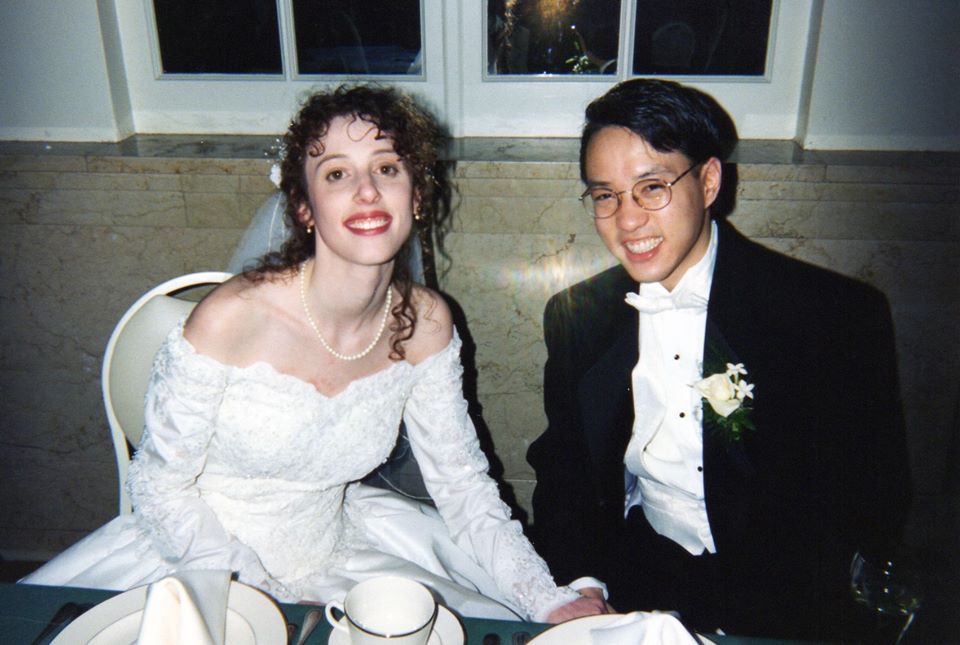 She pointed out that since counseling was not as popular as it is today, Teddy acted out in high school through drinking and skipping classes. He resorted to acting tough as he was bullied by almost all White kids in his neighborhood and school.

“I think that helped him become accepted, but he always had that edge and still did when I met him. One night, he let his guard down and began to hold my hand, I knew then that he liked me. Over the first few weeks, both of us grew very close, for the first time, he opened up and shared the trauma of his Dad dying and I also was in a place where I needed the same kind of support from him.”

Growing up as a Jewish girl in a hometown that had a very small Jewish population, Sonja remembers feeling “different.” This allowed her to connect with Teddy in more ways she anticipated.

“Ironically, Teddy grew up in a town with many Jewish families and probably knew more Chanukah songs than I did and definitely attended more Bar Mitzvahs. I learned about Chinese culture in many ways.” 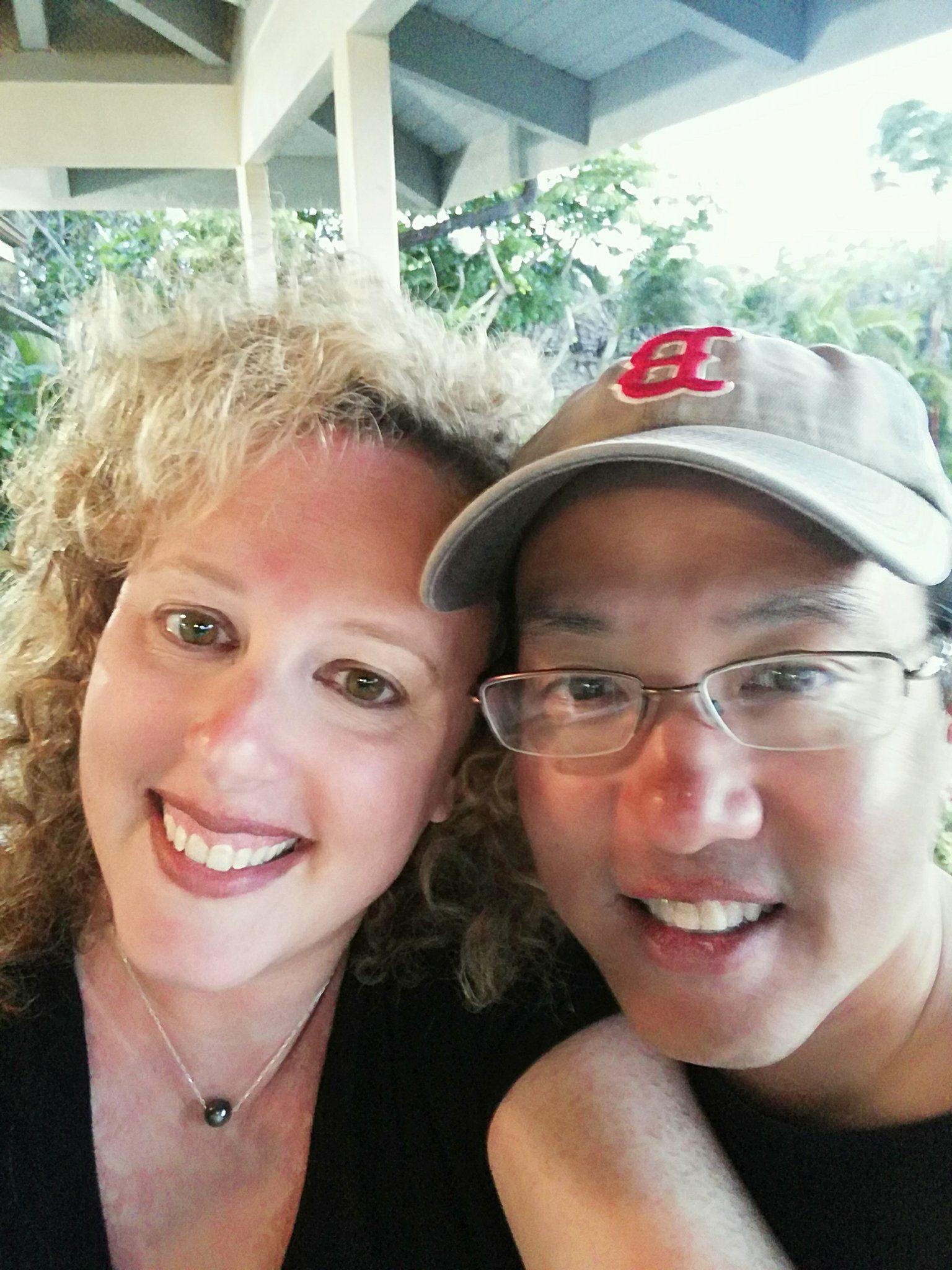 According to Sonja, the first time she met Teddy’s family was at his home when she and her friends took him to a Rolling Stones concert.

“We went to school in upstate NY and rode the bus home to Long Island, where he lived. The bus broke down and we were really late.  There were no cell phones at that time and we couldn’t contact his mom. I remember the first time I ever set eyes on her, she was in total freak out mode!“

Sonja noted that Teddy’s mom eventually invited them to eat after everything was settled and everyone was introduced.

“I had grown up in upstate NY and my closest thing to Chinese dining was our local Americanized Chinese restaurant. Luckily, I loved the first real Chinese food that was placed in front of me, because it would not have gotten off to a good beginning if I didn’t eat all of it!”

The rest of the night went on beautifully as planned.

“We went to the concert and of course, new in our romance, it was incredible. Teddy bought me a pink rose from a vendor on a corner, saying the rose was like our future children, a ‘hybrid.’ The incredible romantic gestures of an 18-year-old, newly in love, rarely take place like this anymore.” 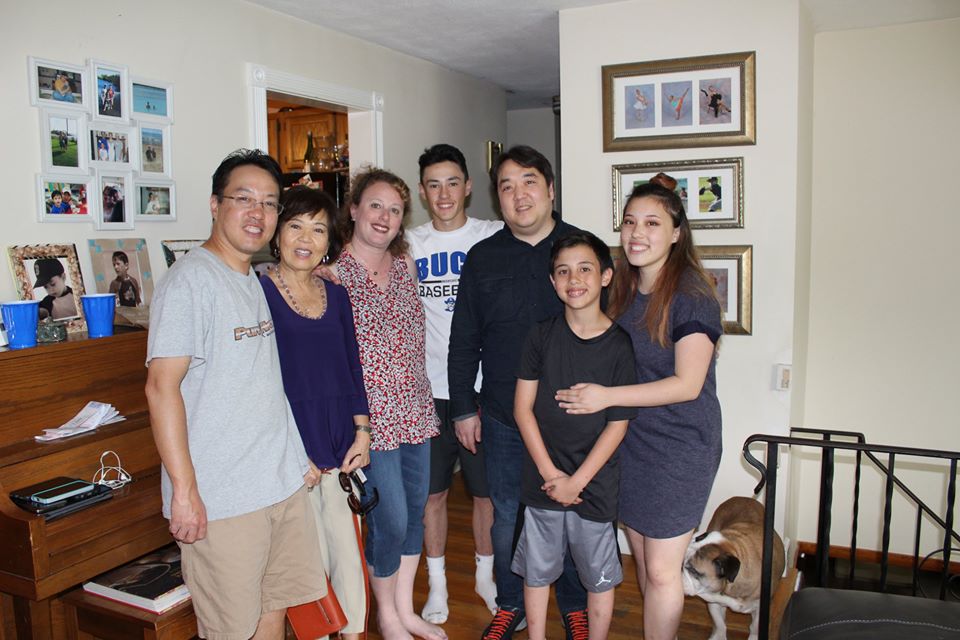 Sonja further revealed that she learned more about Chinese culture over the years from her mother-in-law. She shared some amusing anecdotes:

“Like most Asian moms, grandmothers, aunties, etc., she will tell you that you are fat, but then prepare a large meal and get upset if you don’t eat it all.”

“One Thanksgiving, she told my husband and brother-in-law, who are both in their 40s and successful men, that they were disappointments because they didn’t go to Harvard. My youngest piped up that he was going to go to Harvard on a full-ride and superstitiously, she yelled, ‘Don’t say that!’ But, his birthday check came a couple of months later with a long lecture about how he should reach his goals.”

According to Sonja, Teddy appreciated her post about their relationship, although he was a bit surprised at how much attention it received.

“We’ve really enjoyed all of the sweet comments and also had to laugh some because if people could see us all right now, the five of us living together in a small house during this quarantine time,” she said. “But we do know how blessed we are!”