A Louisiana State University (LSU) student accused of calling his Asian schoolmates “Ching Chongs” while demanding that they “get the f*** out” of a home football game will reportedly not face any punishment.

In a now-viral tweet, biology freshman Christy Nguyen recalled how a young man in a white shirt repeatedly yelled at her group of friends during a match between the LSU Tigers and the Georgia Southern Eagles (Georgia Southern University) at Tiger Stadium on Saturday.

Nguyen hoped to identify the man through a few photos her friend managed to take. She claimed that his friends did nothing as he yelled at them.

“Does anyone know who this guy in the white shirt is? He repeatedly yelled ‘Get the f*ck out Ching Chongs’ at me and my friends out of NOWHERE at the LSU game in the student section,” Nguyen wrote. “His friends didn’t do anything. Please help find him and email LSU.”

Nguyen’s tweet, which received more than 57,000 likes and 33,000 retweets, drew mixed reactions, with most expressing support and sympathy for what she and her friends had experienced.

Some users identified the man as someone named Drew Peacock, but Nguyen and her friends later confirmed that the student in question is Foxworth “Fox” Vidrine, a political science sophomore.

Speaking to The Daily Reveille, LSU’s student newspaper, Nguyen reiterated how humiliating the incident had been for her and her friends, who were left with no choice but to exit the premises.

“It was really humiliating; he was yelling, and everyone around was just looking. He even had the satisfaction of seeing us leave,” she said.

However, it was not just Vidrine’s friends who ignored the incident, as literally no one in the stadium stepped in to call him out.

“No one even tried to stop it. We were just shocked and had no clue what to do,” said Thao Ngo, a chemical engineering freshman. 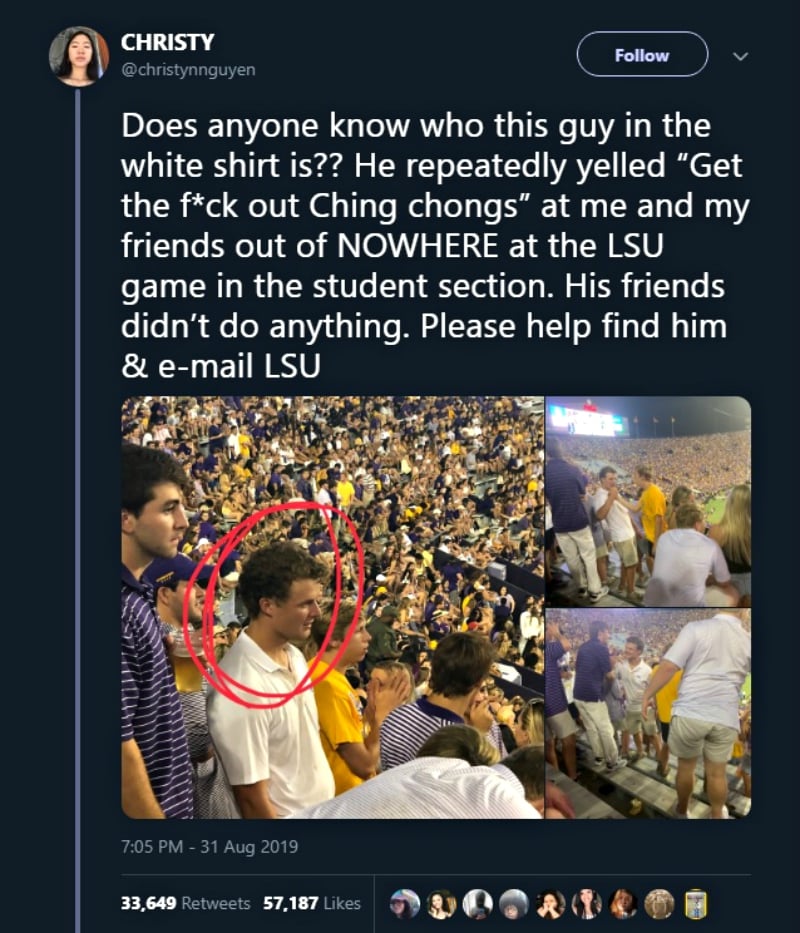 Some users reportedly criticized Nguyen for going public about the matter. Allegedly, one even wrote, “I hope you get beat up.”

She also received messages claiming that Vidrine’s actions were actually of his character.

“That’s his character, everyone that talked to us said he’s known to be like that,” she said. 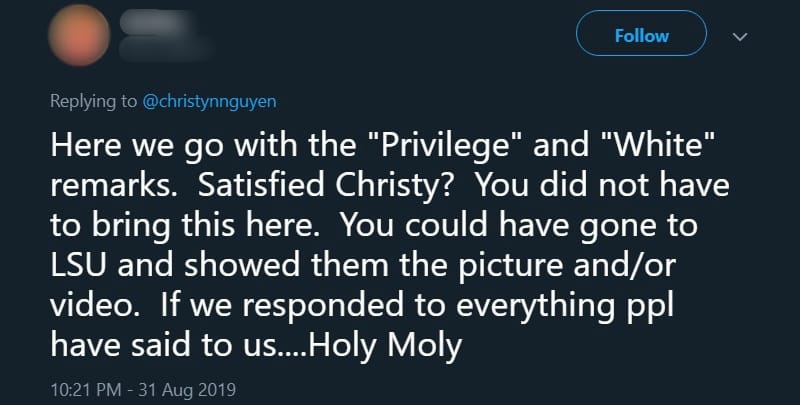 By Tuesday, Nguyen and her friends met with LSU Associate Vice President and Dean of Students Mari Fuentes-Martin, but they heard nothing about any possible disciplinary action for Vidrine.

“The whole meeting was essentially about how we can react as a community versus finding any type of consequence or solution,” said Madaleine Vo, another biology freshman.

Ahead of that meeting, Fuentes-Martin already told them that Vidrine’s words “were not threatening and were protected by his right to freedom of speech,” the Reveille noted.

“We just didn’t understand that because hate speech and freedom of speech are two different things,” Vo said.

In August 2018, Stewart Lockett made headlines after becoming the first Black student body president of the university in nearly 30 years. However, more needs to be done — or the school risks being “left out in the cold for decades,” LSU President Fieldon King Alexander told the Bayou Brief in April.

Still, Nguyen and her friends were left disappointed with the way the university has been dealing with the matter.

“They haven’t even addressed it,” Ngo told the Reveille. “The way that they’re handling it is by teaching the victim and the people around the victim what to do if that happens again instead of dealing with the person who actually did the hurtful act. It makes us feel like we did something wrong or are unwelcome.”

In an update to the story, Mari Fuentes-Martin, Associate Vice President for Student Affairs & Dean of Students, provided a statement to NextShark, clarifying that the university is still investigating the incident but can not comment specifically on matters related to the investigation:

“LSU has received the report and has been meeting with the students involved. The language and words used in this incident do not reflect who we are as a university and the welcoming environment we have created for students of all backgrounds. The university is committed to maintaining a safe living and learning environment that embraces individual differences and values cultural inclusion. Regarding potential discipline or violations that could result from this investigation, we cannot discuss or disclose anything pertaining to an individual student as that is part of a student’s federally protected educational record (FERPA). That process would be handled through LSU’s Office of Student Advocacy & Accountability as outlined in the Code of Student Conduct.”