The three Japanese members of K-pop girl group TWICE have come under fire after speaking their native language during a live broadcast in a mobile app.

On June 11, Mina, Sana, and Momo sat for a V LIVE stream that kicked off with all of them speaking in Korean.

But a few minutes into their broadcast, the members started conversing in Japanese, frustrating Korean viewers who later criticized them for being inconsiderate.

Koreaboo took note of some comments:

“After 2~3 minutes, the members kept talking in Japanese. V App is mostly used by Korean fans so I was frustrated.

“Korean fans had to wait until the subs were released. They didn’t know why they were laughing with each other until they saw the subs the next day.”

One even argued that the K-pop industry is falling apart because of Japanese members:

“The problem is that they only spoke Japanese for so long. What kind of K-Pop idols come on live broadcasts to speak in a different language. I can just imagine the three of them in a clique amongst the members. I’m not saying having Japanese members in TWICE is bad but that K-Pop is going downhill because of Japanese members.” 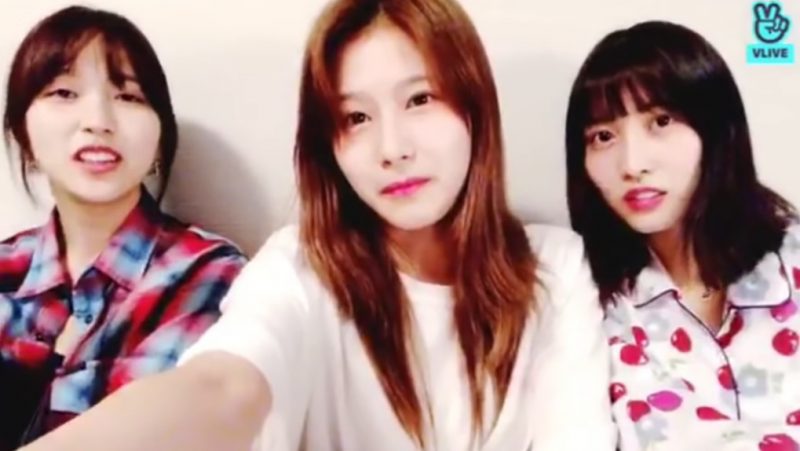 Still, others were more direct on their demands:

“If you’re going to come to Korea to earn money, you should speak Korean.”

“Don’t put in Japanese members in K-Pop groups if they’re only going to speak Japanese.”

“I just don’t want them to speak another language other than Korean. They don’t have family here. They’re basically here to make money and go, so it’s barely enough even if they say ‘I love Korea’ in Korean.”

Clearly, the members acknowledged the need to translate their broadcast, and subtitles were applied the following day.

Many defended the trio:

“It’s not even a public broadcast, this is just V app, they can do whatever they want and it’s their freedom to do whatever they want for this kind of broadcast. Whether they speak Japanese or Korean, what does it have to do with you? If you’re so uncomfortable not understanding what they say, shouldn’t you just study Japanese then? Must you keep watching their V app just to hate? If you actually watched the video, they spoke Korean way longer than they did in Japanese, they even uploaded Korean subtitles so that we can understand, if you’re still not satisfied then screw off instead of making posts like this.”

“What do you want? So if they go on Japanese show, you want them to tell their fans ‘only Japanese fans can watch us’? You know Twice has fans from Korean, Japan, Thailand, China, etc. We’re all Once [Twice fans] at the end of the day, do you expect them to learn all those languages?”

“Bullsh*t there are Chinese male members who speak Chinese among themselves and no one ever says anything, but you only attack them because it’s Twice.”

Netizens at One Hallyu chimed in:

“Japanese members speaking their mother tongue — omg so scandalous. I guess Twice’s lack of scandals has antis pulling sh*t from their a**es lmao.”

“What is the problem you f***ing knetz? They are Japanese FFS.”

“They’re Japanese though. I mean you’d be more comfortable speaking your native language. So many non-issues in K-Pop news lately.”