‘This Asian face’: The artist behind the #StopAsianHate illustrations

As the only Asian kid in class, a young Jonathan Chang, who had immigrated to the U.S. from Taiwan at the age of 3, felt out of place.

As the only Asian kid in class, a young Jonathan Chang, who had immigrated to the U.S. from Taiwan at the age of 3, felt out of place.

At 10 years old, he figured that slowly replacing parts of himself would make him less different. When he couldn’t understand the cartoons shown on American television, his frustration pushed him to spend more time watching them. He would watch “Teenage Mutant Ninja Turtles” over and over until English words rolled off of his tongue like it was his first.

On the way home from school during the third grade, he realized that the Asian food he ate for lunch was yet another othering factor he could change to try to belong in his predominantly white neighborhood in Tampa, Florida.

“I don’t want to bring Chinese food for lunch anymore,” he told his mom almost immediately after coming home from school one day. “I want Lunchables.”

His mother, Annie Chow, who had decided to leave Taiwan after her husband died in a motorcycle accident, studied her son’s request before sitting him down.

“Jonathan, no matter how assimilated you are with American culture, you are still going to have this Asian face,” she said. “As long as you live, when people look at you, they’re first going to see an Asian person so there’s no reason to want to hide that from anyone. You just have to be proud of who you are.”

Though he might have been able to make the difficult transition to English from Mandarin, his appearance was unchangeable. It wasn’t that he was ashamed of how he looked, but his appearance meant he was inescapably different from his classmates. 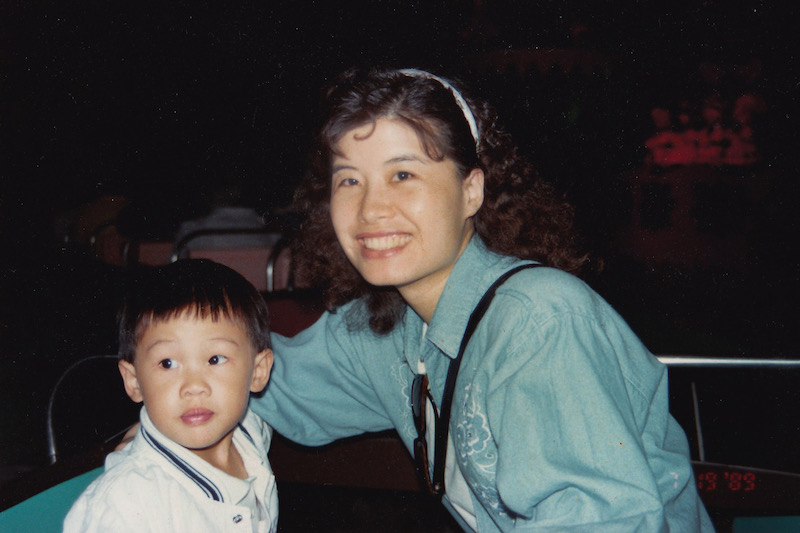 What Annie didn’t expect was how her young boy would someday grow up to use his mom’s unapologetic confidence to embrace those features, eventually joining rallies to raise awareness of the rise in anti-Asian hate crimes throughout the pandemic beginning in 2020.

Jonathan knew his parents had wanted to instill pride in him for his Taiwanese heritage, but they also wanted him to be careful. After decades of trying to balance the desire to assimilate with preserving his own culture, he began to understand that hate crimes continue because many AAPI communities had chosen to “keep their head down.”

“My mom told me to be careful and not cause trouble. It’s the model minority [warning] of like ‘Oh, don’t step out of line,’ ‘Don’t make people feel uncomfortable,’ and ‘Keep it down,’” Jonathan says. “But you know what, these events keep happening because we ‘keep it down.’”

Jonathan felt restless throughout 2020, like all the rallies happening were not enough to cause the AAPI community to wake up and acknowledge what was really happening. He believed that the different ethnicities broadly categorized under the AAPI community were never really tightly knit but that what they had in common was minding their own business.

That is, until one morning in early February of last year.

On Jan. 28, 2021, Jonathan had been moved by the story of Vicha Ratanapakdee, an 84-year-old Thai American who was killed after being brutally pushed to the ground in San Francisco.

Sarah Shen, a friend of Jonathan’s, encouraged him to channel his frustrations into art and to upload them to his social media, knowing the death of Ratanapakdee would not be the last.

“We can’t control what the rest of the Asian American community is doing,” Sarah told Jonathan. “You can control your actions, and I can control my actions. If they don’t think this is a real issue, that’s on them, but we know the truth.”

“Do what you do best,” Sarah said. “Draw a picture of him. Let his humanity and soul shine through your art.”

Shortly after doing so, Jonathan woke up to social media users having changed their profile pictures to his own illustration of Ratanapakdee.

It was an odd feeling for Jonathan. He was angry, but, with the murder of Ratanapakdee, for the first time, he also felt that the AAPI community stood as one. Many shared his illustration online in an effort to speak with one voice.

While he had never really seen himself as an activist, he had always been driven by his frustrations. Racism and fear may not have been new for him, but one thing was different now: He no longer wanted to erase and replace his Asian identity.

“Since then, I’ve done many more illustrations whenever I hear of a case that is not getting the well-deserved traction it needs in the mainstream spotlight,” Jonathan says. “I feel that as creatives we have some sort of responsibility to use our skills to enact positive social change in our community.”

The 36-year-old artist attended the ArtCenter College of Design in California, where he graduated with a bachelor in fine arts and illustration. For the past decade, he has been working in the toy and animation industry.

Before his illustrations went viral on social media, he had already received another opportunity to lend his artistic skills to raise awareness of the ever increasing anti-Asian hate crimes. After an Asian woman was lit on fire in Bensonhurst, Brooklyn, in July 2020, he was asked to design a T-shirt for the “They Can’t Burn Us All” movement organized by activist William Lex Ham and rapper China Mac.

“It really pissed me off and no one was covering it at the time, outside of some small Asian pages on the internet,” he says of the incident. “No one really cared about it.”

The shirt he designed, featuring the sentiment “Proud AF to be Asian,” became an iconic symbol for the movement.

Jonathan continues to document the Asian lives lost due to racism and hate. His viral portraits of many victims (deceased and surviving) can be seen in rallies and all across social media and publications. His illustrations were displayed on billboards in Times Square during a vigil for 40-year-old Michelle Go, who was killed when she was shoved into the path of an oncoming subway in New York City on Jan. 18.

“The power of Jonathan’s portraits is such that it allows us to pay respect and honor the victims’ memories without us experiencing the trauma of that,” says Ben Wei, the founder of the nonprofit organization Asians Fighting Injustice, who organized the vigil. “I hope that he does not have to draw any more of these portraits, but I don’t think that’s the case at this point. Every illustration that he does helps us spread more awareness to others that don’t believe that we are being attacked because there are still denials of this.”

“When I am drawing these portraits, I’m discovering these people for the first time and empathizing with their situation,” Jonathan says. “It’s hard, because in some cases I’m trying to breathe life into my drawing when I know, in reality, these people are no longer with us.”

“Most of the time I debate not finishing those portraits because of how it personally makes me feel,” he adds. “I get through this by reminding myself that raising awareness is more important for our community than how it personally affects me.”

One of his latest illustrations is of Christina Yuna Lee, the 35-year-old Korean American woman who was fatally stabbed in her NYC Chinatown apartment on Feb. 13.

Christina was a Rutgers University graduate and worked as a senior creative producer at the digital music platform Splice. After the 2021 Atlanta spa shootings, she formed the Art Appropriation Council to provide opportunities for creators of all backgrounds as a way to combat racism and appropriation. Christina is remembered for being an “irreplaceable presence” who was “always filled with joy.”

“I hope people can focus on the victims and know that these are all real people, and it could have been any one of us,” he says.