Researchers in Japan have digitally reconstructed the image of a woman born 1,600 years ago using DNA technology and advanced computer graphics.

The research team of scientists from seven research institutes in collaboration with the education board of Yonezawa city released the photo and video of the recreated model dubbed “Himiko of Okitama” on Nov. 4.

Himiko is depicted with droopy eyes, a flat nose and straight black hair in the images made possible via DNA analysis and forensic facial reconstruction.

The woman’s skin color and hair type were reportedly determined based on genetic data derived from her skeletal remains exhumed in 1982. Her “drooping eyes” were based on her skin’s estimated thickness. 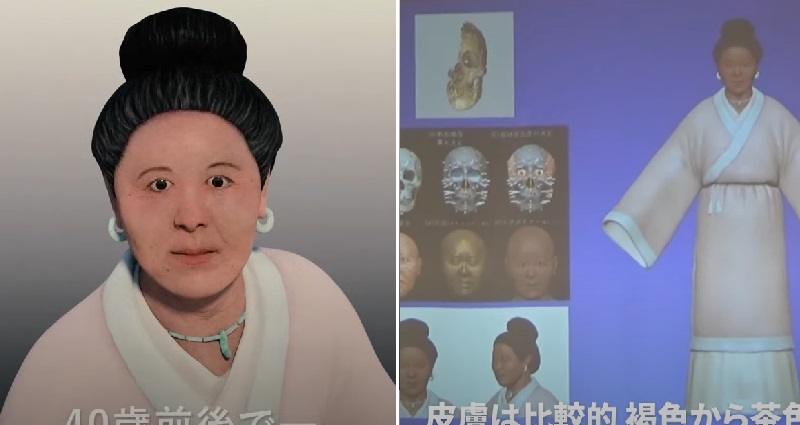 The bones were extracted from a stone coffin found in the No. 137 Totsukayama grave, one of the 200 graves situated at the foot of Mount Totsukayama in Yonezawa’s Asagawa district.

A study conducted by Dokkyo Medical University revealed that the woman was around 143 to 145 centimeters tall and is estimated to have died at around 40 years old.

In 2017, a separate excavation conducted by Tohoku Gakuin University at the Haizukayama burial mound site in Kitakata led to the unearthing of the skeletal remains of a 50-year-old man.

The research team held a symposium in Yonezawa City on Nov. 13 to explain the process involved in Himiko’s reconstruction project.

The project began after nuclear DNA sampled from her teeth was compared with the man’s remains, leading to the conclusion that her genetic data was about 96 to 97 percent well-preserved, reported The Asahi Shimbun.

Tohoku Gakuin University’s Hideto Tsuji, who led the project, noted that the “entire data of nuclear DNA” they obtained from the remains is rarely found in old human bones.

In 2021, Tohoku University’s Yuka Hatano and Toshihiko Suzuki began studying the woman’s remains and reconstructing her facial features. The research team also commissioned the National Museum of Nature and Science in Tokyo to analyze the nuclear DNA.

The results of the National Museum of Nature and Science’s analysis indicate that she had straight black hair as well as brown or blackish brown skin. Her eyes were reportedly a color between black and brown.

While Himiko’s skull had already lost its nasal bone and part of its right side, the researchers were able to visualize how the ancient woman likely clenched her teeth, which may provide insights into her eating habits.

“Her teeth were found worn down with apparent signs of temporomandibular joint dysfunction,” Hatano said. “The conditions seemingly resulted from her chewing style and other habits, and her jaw was distorted slightly leftward.”