Home News Asia How to Drink Soju Like a True Korean

Soju, the so-called “Korean firewater”, is one of the world’s most popular spirits. In recent years, this South Korean export has become a global favorite, selling more than any other liquor brand in the world.

However, despite its popularity, many are still not aware that one does not simply open a bottle of the rice spirit and start drinking it with abandon. There are a few certain rituals that are commonly practiced before and after cracking the cap open.

According to Koreaboo, the custom of shaking the bottle began during the era when cheaply made corks were used instead of the metal cap commonly used now. Drinkers would shake the bottle so that cork residue would rise to the top. They would then hit the neck of the bottle to get rid of the crumbs of the cork powder.

The practice has stayed on despite the cap having long been replaced since it is believed that shaking the bottle also properly mixes alkaline water particles with the alcohol.

For those drinking in South Korea, or drinking among South Korean friends, here are some important reminders to keep in mind:

Soju may be enjoyed at room temperature, but is also served chilled in the summer and warm in the winter.

When in a group, remember that the first shot is always drunk together.

Don’t forget to always use Soju shot glasses as it is considered improper to drink straight from the bottle.

It is also customary to let someone pour your shot for you while you pour the shot for another. Be sure to use both hands when doing either pouring or receiving to show respect. Also important to note — never let your friends sit with an empty glass. 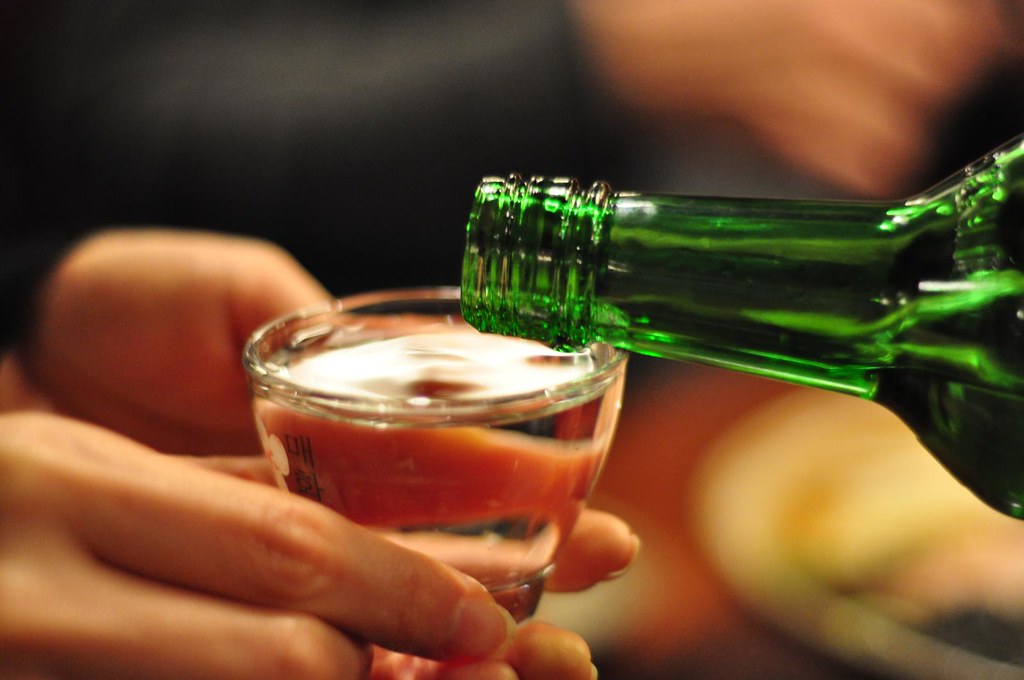 Another show of respect requires pouring for an older person and avoiding direct face to face contact with them when drinking. To avoid offending the elderly, it is advised to turn your head to the side.

Lastly, make sure to keep the soju flowing by making sure your drinking buddies are poured with shots in a timely manner.

And with any fun experience involving alcohol, please enjoy responsibly.