A Hong Kong police officer fired a warning shot after a mob had apparently turned violent during a protest on Sunday night.

The clash, which took place along the busy Sha Tsui Road in Tsuen Wan, saw black-clad protesters advance with bamboo and metal rods toward a group of outnumbered officers.

A study of several videos showed that one officer fell to the ground and dropped his gun as protesters charged toward the police, the South China Morning Post reported.

Seconds later, a warning shot was fired, while other officers drew their revolvers and took their aim at protesters.

Superintendent Leung Kwok-wing of the New Territories South Regional Crime Headquarters confirmed that an officer had fired a warning shot because “his life was in danger,” according to pro-democracy Apple Daily.

The incident marks the first time a live round has been used since the protests evolved from the opposition against a now-shelved extradition bill to calls for Hong Kong’s independence from China. 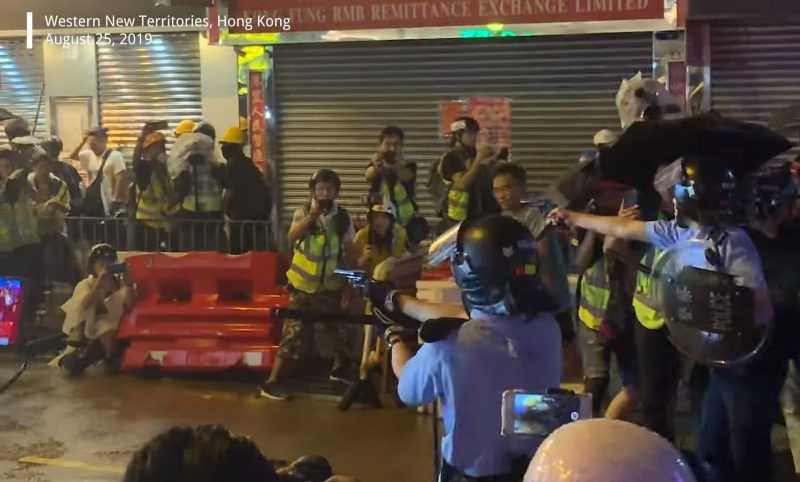 In a statement a few hours after the chaos, Senior Superintendent Yu Hoi-Kwan described the unidentified officer’s action as “valiant and restrained.”

“When our colleagues passed through Chung On St. in Tsuen Wan, over 100 rioters poured in. They used aggressive weapons like metal pipes, bamboo sticks and road signs to recklessly attack police officers. Everyone can tell the behavior of the rioters was irrational. Some of our colleagues fell down, but the rioters didn’t stop their violent acts and kept attacking. They seriously threatened the safety of the police officers.

“Since the lives of our colleagues were threatened, under circumstances with no choice and with several warnings given, six colleagues drew their guns in readiness in order to protect themselves, other colleagues and people on the spot. One of the police officers fired a warning shot in the air.

“No one was shot. The officer’s action was valiant and restrained. The level of force exercised was necessary and reasonable.”

The clash on Sunday evening reportedly escalated from a peaceful march on Sha Tsui Road and the vicinity of Yi Pei Square, which protesters believe to be the base of the white-shirted people who attacked anti-extradition bill activists on Aug. 5, nonprofit Hong Kong Free Press reported.

Apparently, it followed other violent face-offs in the afternoon, where police used water cannon trucks for the first time to subdue protesters.

During the clash, an unarmed, civilian man was also seen pleading with an officer not to shoot before getting kicked to the ground.

However, video footage from Chinese state-run CGTN revealed that the civilian — who had been following the protesters — actually blocked the officer, who was aiming at the advancing mob.

On Monday, Assistant Commissioner of Police Operations Mak Chin Ho announced that 86 people had been arrested over the weekend violence, the youngest was aged 12 and the oldest was 52, according to The Straits Times.

“Over 100 rioters armed with offensive weapons surrounded and attacked our officers. They charged at our colleagues with road signs, metal poles and long sticks repeatedly and recklessly. As a result, our officers sustained multiple serious injuries,” Mak said.

The official added that 21 colleagues sustained injuries during the weekend riots while reiterating that their use of force was “necessary and reasonable.”

“I must emphasize the officers demonstrated great restraint. Their use of force was indeed necessary and reasonable. It was to protect any person, including our officers themselves, from death or serious bodily injury.” 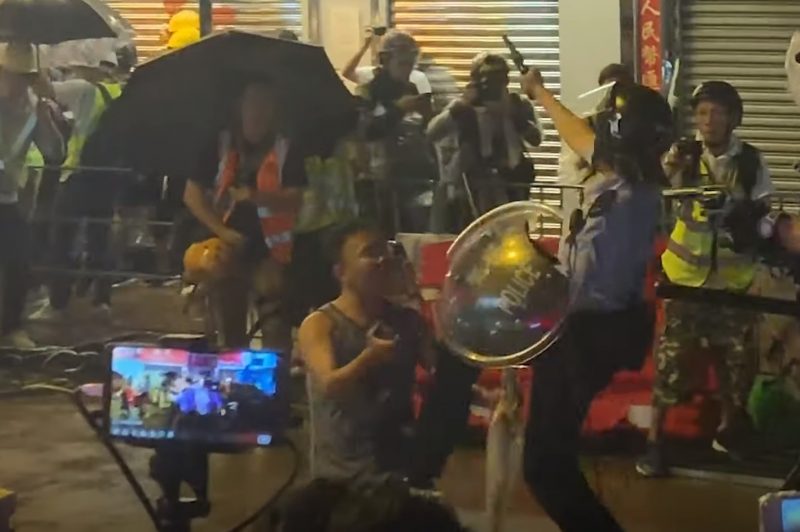 In the wake of escalating violence, Hong Kong Chief Executive Carrie Lam denied that her government has lost control, adding that she remains “committed” to serving her constituents.

“I think a responsible chief executive at this point in time should continue to hold the fort and do her utmost to restore law and order in Hong Kong,” the 62-year-old official told reporters on Tuesday, according to CNBC. “I wouldn’t say that my government has lost control. Day in day out, we are not only supporting the law enforcement bodies, we are also acting responsibly to deal with other issues that have arisen.”