There’s little to no information regarding the winner of the 18th World Alba White Truffle Auction at the Castle of Grinzane Cavour in northwest Italy.

The only details about him that surfaced are his name – Eugene Fung – and that he is a regular patron of Michelin-star restaurant, 8½ Otto e Mezzo Bombana, according South China Morning Post.

A total of $4.28 million Hong Kong dollars ($548,503) was raised at the auction. All proceeds will be donated to local Mother’s Choice charity, specifically supporting pregnant teenagers and children who have no family.

“We’re very happy to get such a big figure in this poor season,” organizer of the auction, Marco Scuderi, said, according to the New York Post.

The price of the 1.9-pound truffles skyrocketed due to the extremely dry weather in Italy during the past few months, especially in the summer and fall. The auction proceeds going to charity also greatly affected the pricing of the exotic mushrooms.

The auctioned truffles were the biggest ones found in Alba, a town located in northern region of Piedmont, Italy. They were presented by an Italian model in front of the bidders transmitted via satellites from Hong Kong, Italy and Dubai. 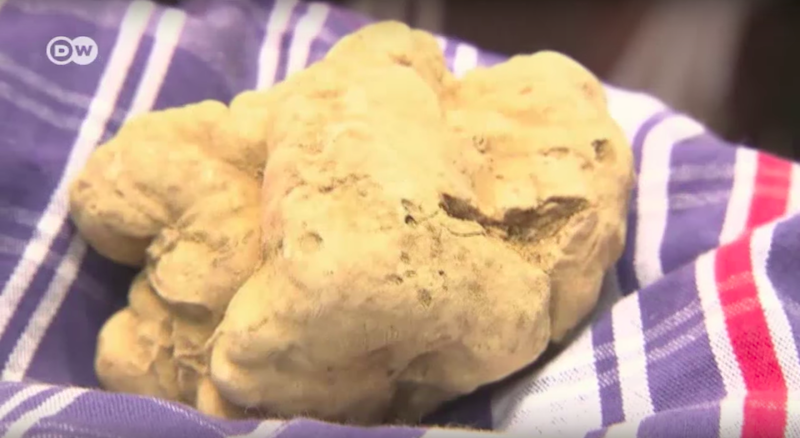 The Alba White Truffle Auction began in 2005 and has been hosted by famed Italian chef Umberto Bombana for the past seven years.

More than 70 patrons reportedly participated in the auction with $8,800 Hong Kong dollars ($1,127) as minimum donation per head.

These expensive truffles, as revealed by the high-end restaurant, are going to be served to the winners and buyers at private sessions. These are all part of the menu created and designed by Bombana, who is known as the “king of white truffles.”