Decked out in the unforgiving pink of Hello Kitty, and complete with graphics of unicorns, emojis, rocket ships, polka-dotted clouds and witty quotes, Logan’s “Super Fast Uber” hopes to bring one woman to a destination GPS won’t likely find: his heart.

Meet Logan, a 28-year-old Uber driver based in Los Angeles. 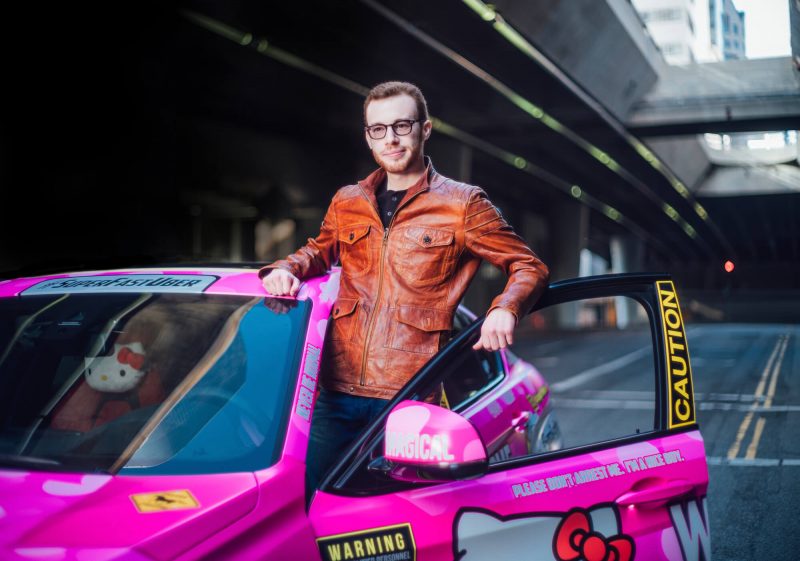 For a few months now, he’s been hitting the streets with the aptly-named “Super Fast Uber,” a 700-horsepower SUV that’s quite the head-turner.

Decked out in the unforgiving pink of Hello Kitty, and complete with graphics of unicorns, emojis, rocket ships, polka-dotted clouds and witty quotes, Logan’s “Super Fast Uber” hopes to bring one woman to a destination GPS won’t likely find: his heart. 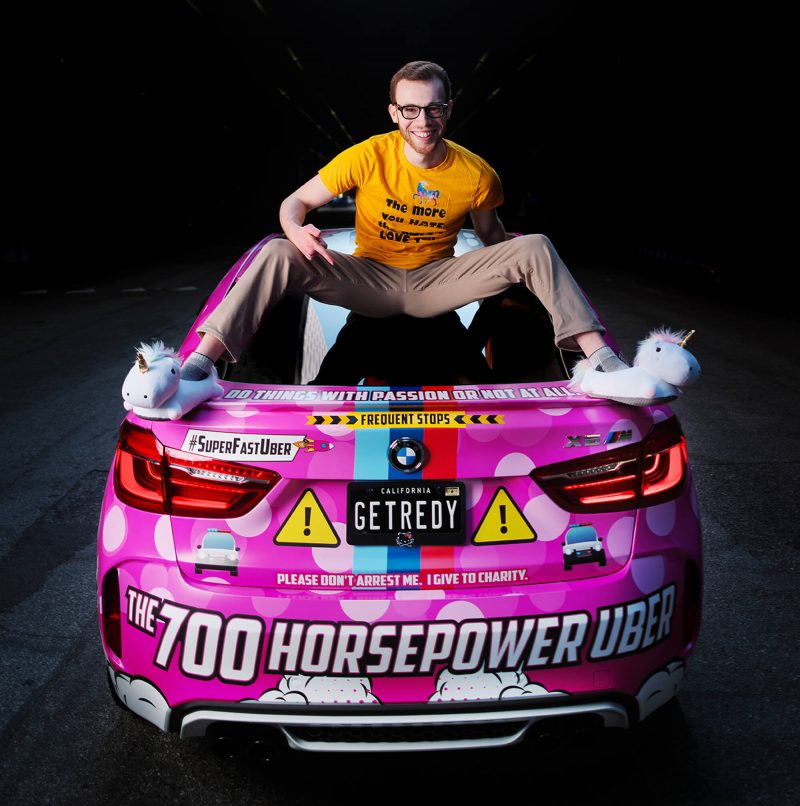 “I’m doing this to find my future wife. I simply ran out of ideas for how I was going to find her.”

Speaking to NextShark, Logan, who is also an entrepreneur, explains the motivation behind his unusual bride search.

“I don’t work in an office, I don’t like hanging out in bars, you can’t talk to anyone in clubs because the music is too loud, I don’t play sports… my lifestyle is not conducive to bumping into my soul mate. My life has always been very different than most and I’m not exposed to the common networking environments in which most find their significant other. I’m either bungee jumping off a tower, hanging out of a helicopter, or relaxing in my Airbnb. 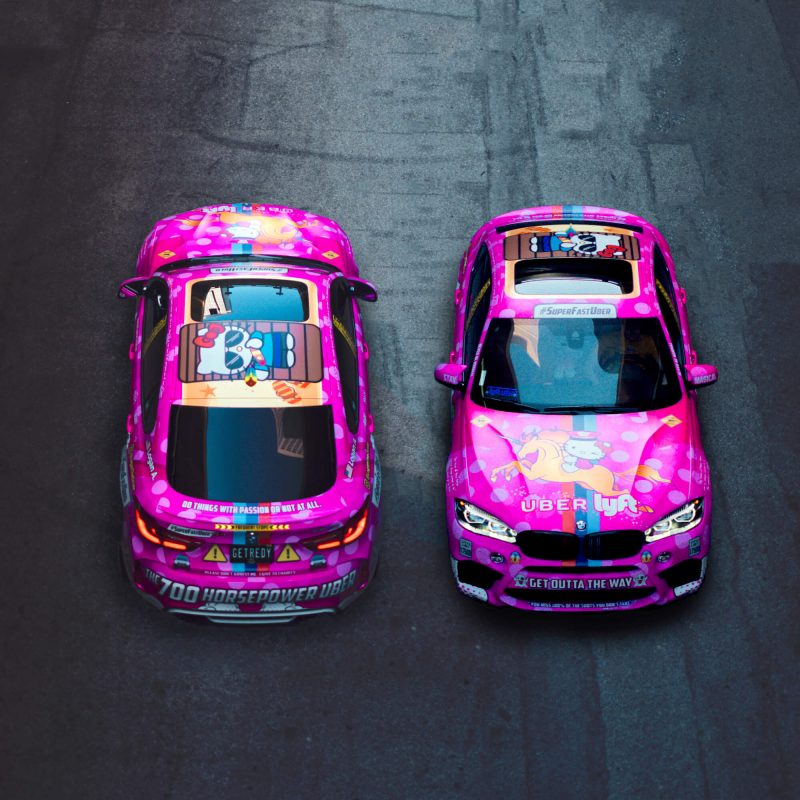 It turns out that the “Super Fast Uber” emerged from the rather simple desire of meeting new people.

“Initially, the idea began as: I’ll become an Uber driver for a little while to meet some people and go rent a regular car to do it,” Logan reveals. “Then my creativity got the better of me — as it usually does when I get passionate about something — and it became: How can I become the most entertaining Uber driver, bring joy to people’s day-to-day life and find my ride or die.” 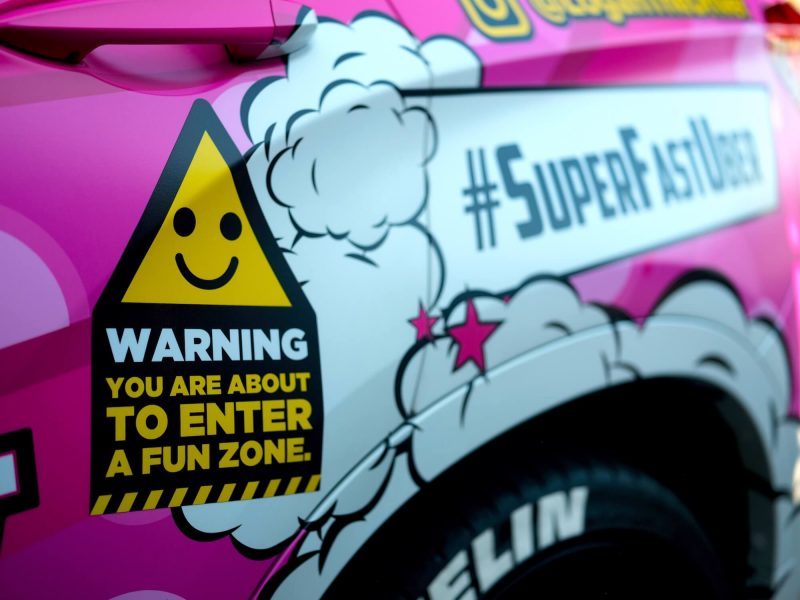 Needless to say, Logan poured his heart out in adorning the psychedelic four-wheeler.

“You need a four-door vehicle for Uber, so I picked the most fun four-door car I knew. Then I started designing a wrap and adding elements, and 150 Amazon.com orders later, here we are. As the trunk lid says, I believe in doing things with passion or not at all. So I went all out.” 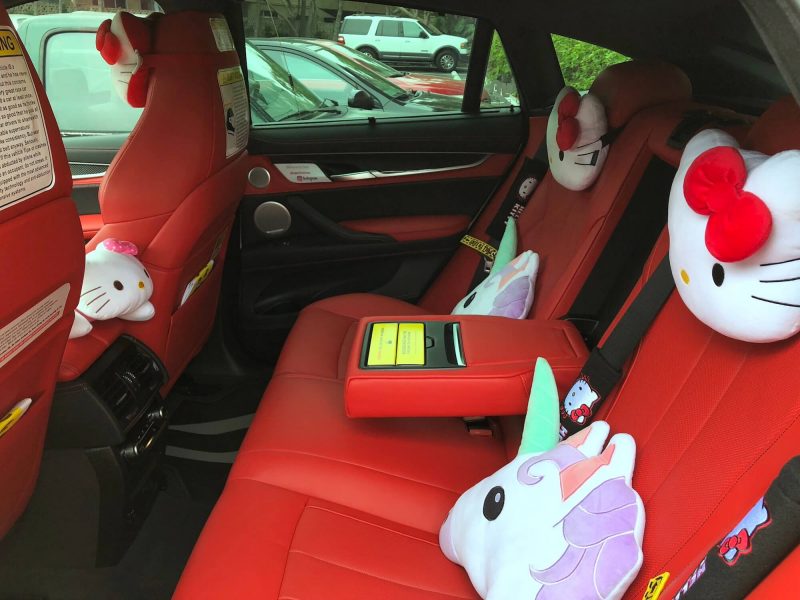 Logan understands that the “Super Fast Uber” will not exactly please everyone, but its unconventional look is precisely what he needs to find the one.

“There’s more noise than ever before in this world. If you want to find something specific, you have set a really precise filter. Any girl who’s repelled by this is not for me. That’s intentional.” 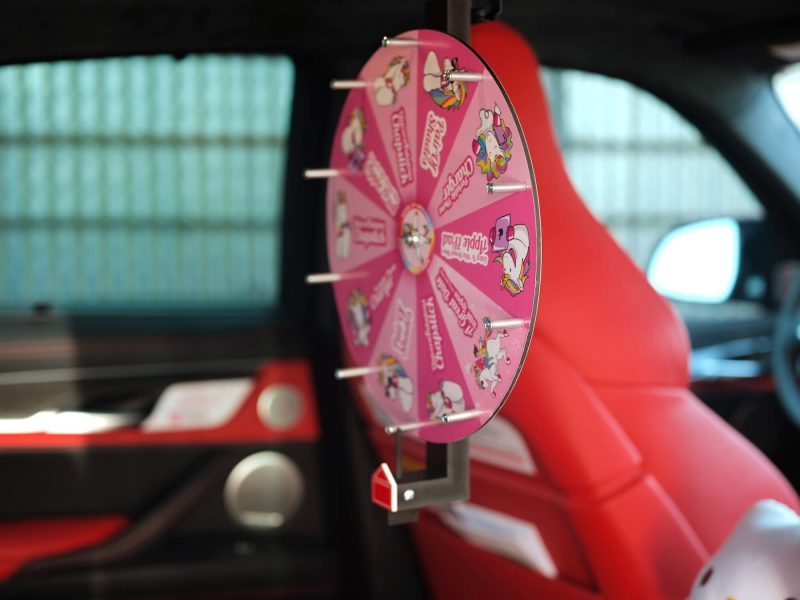 “Dr. Seuss said, ‘We are all a little weird and life’s a little weird, and when we find someone whose weirdness is compatible with ours, we join up with them and fall in mutual weirdness and call it love.’ For me, I’m super weird, not a little weird. This car should make that instantly clear.” 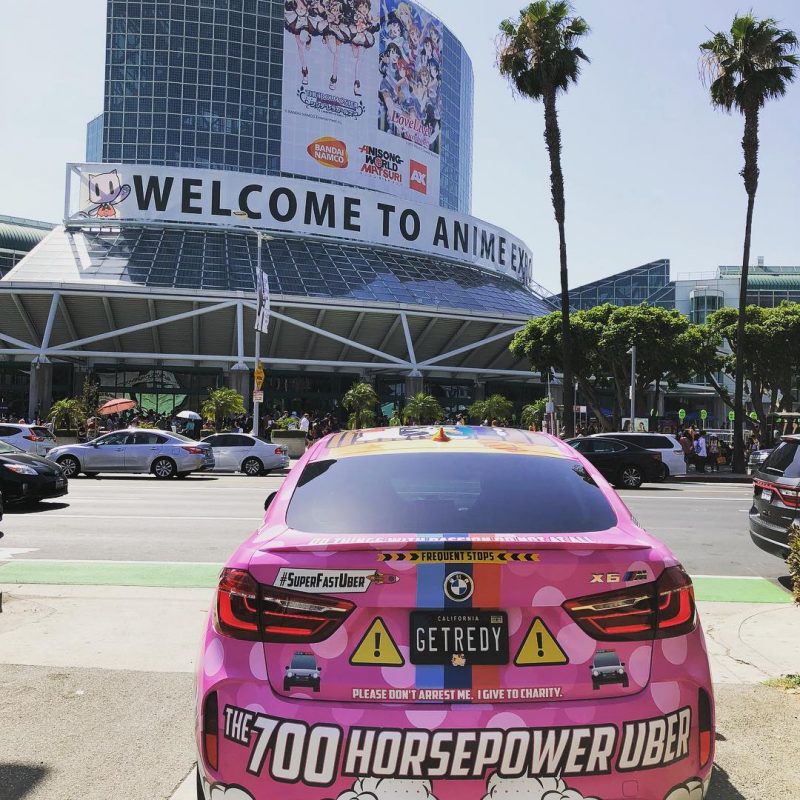 “As the trunk lid says, I believe in doing things with passion or not at all. So I went all out.” 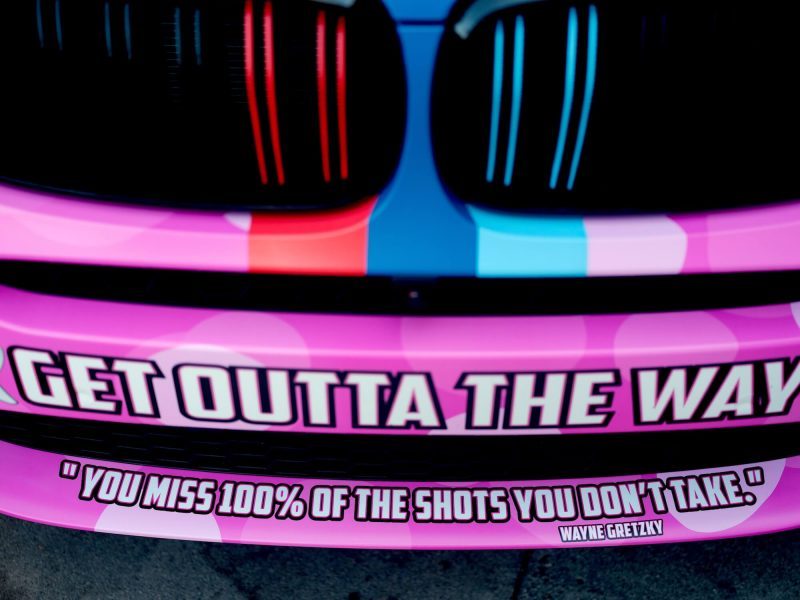 But aside from finding his potential match, Logan hopes that his car will bring joy to other riders.

“The secondary goal was to build a rolling joy machine. Something that gets people excited and brightens the day of everyone who gets to ride in it or just see it go by on the road. It’s quite fitting (and miraculous) that the word JOY is actually within the car’s VIN. I saw JOY in the VIN when picking up the car and it felt like the universe was smiling at me.” 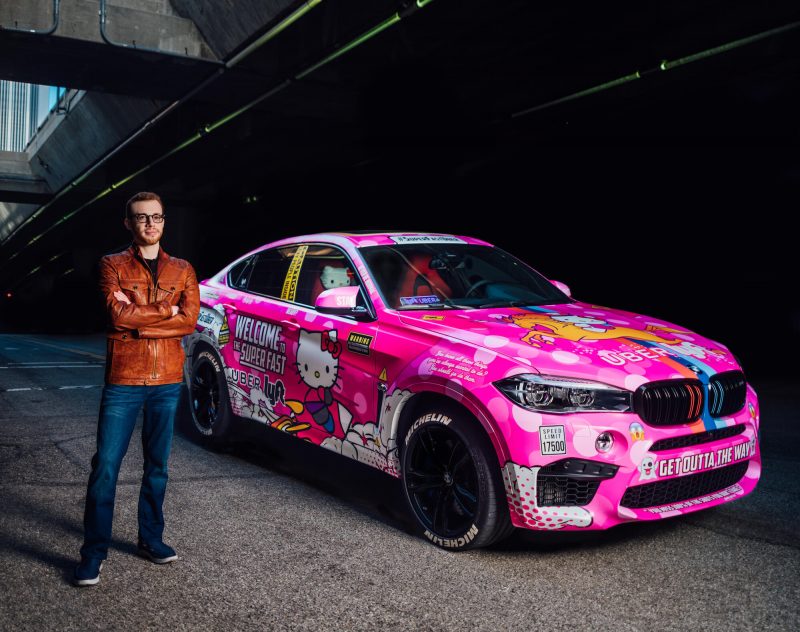 With such goals in mind, Logan took all the time he needed to transform a rather bland SUV into something extraordinary.

“It took three weeks just to design the exterior. There’s so much just on the exterior of the car that it takes a while for it all to sink in when you’re looking at it. There’s 45 unique graphic elements and half a dozen of my favorite quotes.” 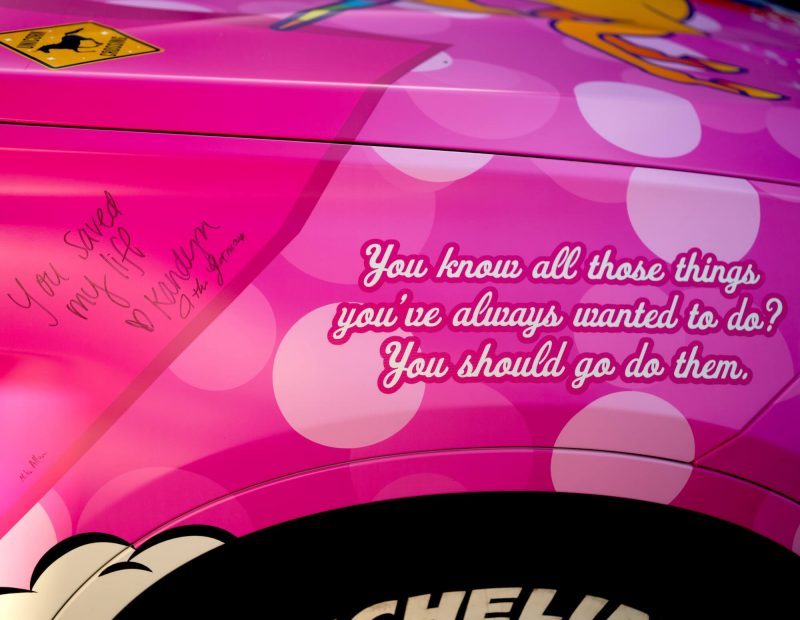 He added, “Then there’s the interior which has a prize wheel that descends from the ceiling, a custom horn system with six different horns including Darth Vader and Shia LaBeouf shouting ‘Just do it!,’ a Mario button on the dash (as a nod to my early days playing Super Nintendo Mario Kart), and unicorn pillows and Hello Kitty headrests. But that’s just the tip of the iceberg. Everywhere you look, there’s another easter egg. Just check the glass on the side mirrors.” 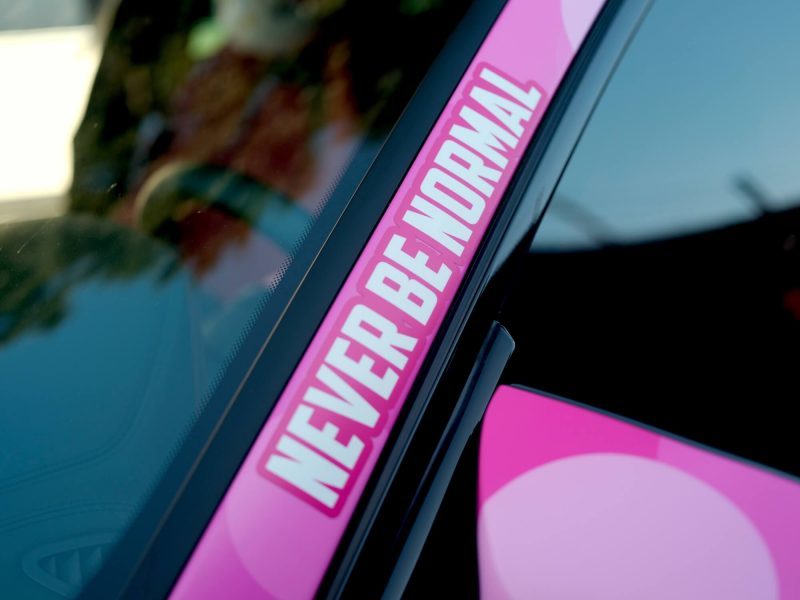 The entrepreneur describes that his car also represents the “anti me” and points out what others may misunderstand about it, such as its rainbow antenna roof.

“In some ways, this car also represents the anti me, which is something that’s going to require an even more clever girl to see through. Because at first glance, it’s ‘look at me,’ ‘like me,’ ‘feed my ego.’ And that’s why most douchebags who wrap their car, wrap their car.”

“But in my case, I quit Facebook two years ago, I can’t stand the ego-feeding dick swinging contests and I have negative 10,000 desire to be famous,” Logan says. “If I want to find this girl, I have to create some awareness that I exist. She’s not just going to knock on the door of my home one day. So I both have to tolerate the drama that comes from being visible, as well as hope that wherever she is, she understands this isn’t an ego play.

“Also, some people think the rainbow roof antenna represents the LGBT rainbow flag. But if you look closer, I used five colors and the rainbow flag is six colors (neat story: the LGBT flag was originally eight colors, but the high cost of printing the color pink in the 1970s necessitated a change to six colors).” 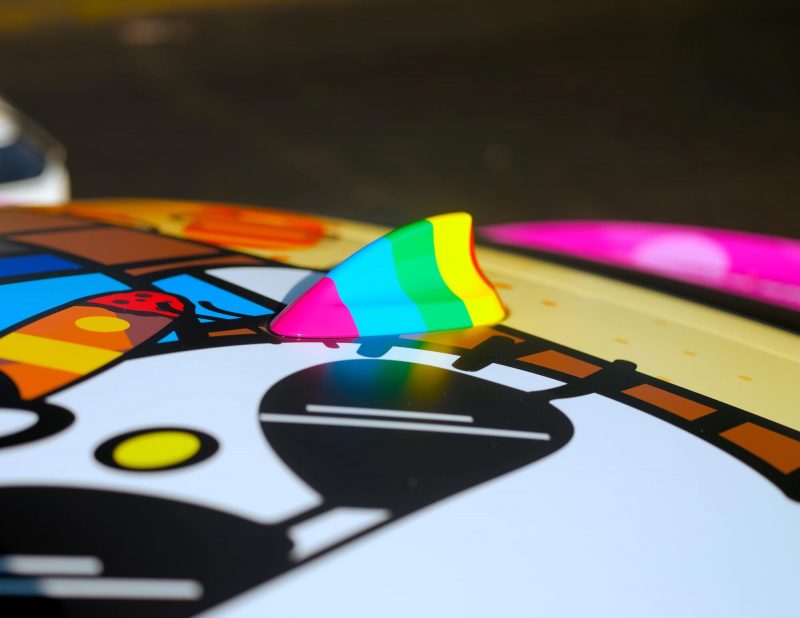 “We create our own destiny. If you want something to happen, go make it happen.” 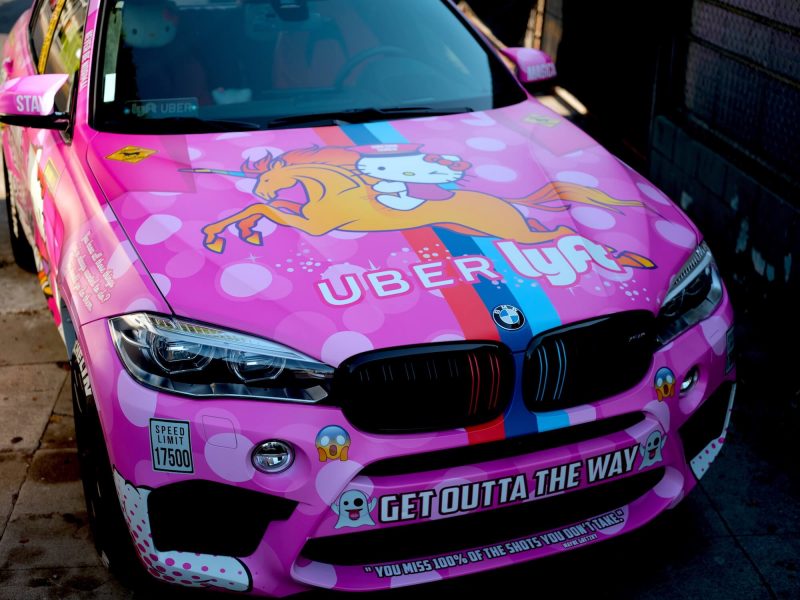 While Logan has found no luck to date, he seems far from bothered. Just like the detail that went into the “Super Fast Uber,” his standards for a wife are beyond common.

“I haven’t found the one yet largely because the standard of who I’m looking for — like my standard for almost anything else — is an order of magnitude above average. And I don’t settle or reduce my standards because it’s convenient. I’m 0 or 100 in everything I do — there’s no 1-99. I’ll either find the one, or I’ll die alone. I’m the first to admit the latter is much more likely. I figure if it takes the average person let’s say one hundred dates to find the one, it’s going to take me thousands if I did it the conventional way, without some random stroke of luck. And I’m not a big believer in luck. I believe you create your own luck and that luck is merely preparation meeting opportunity. So I need a force multiplier.” 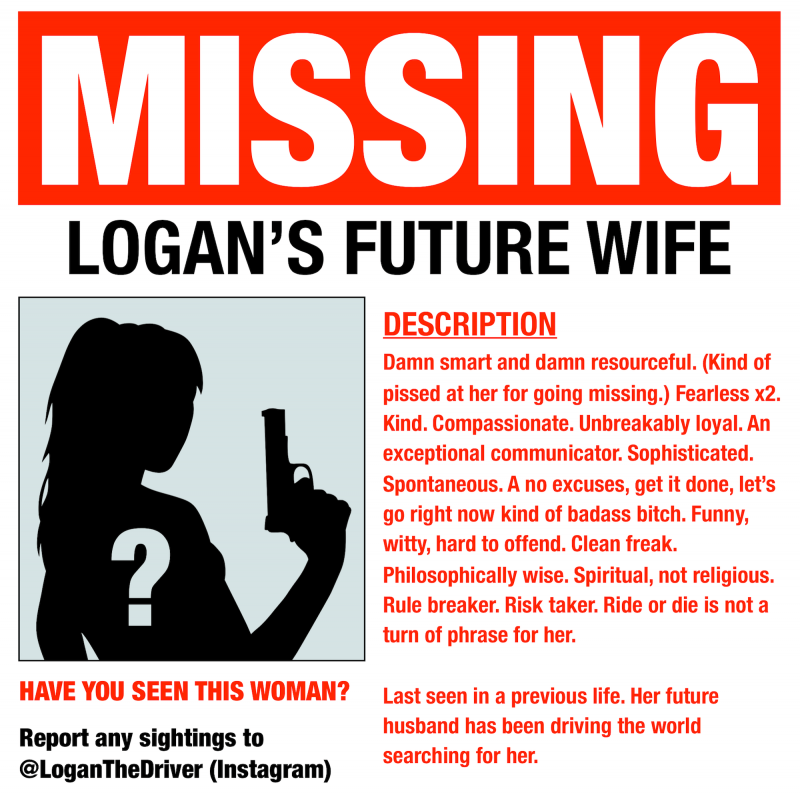 “A lot of people say you should wait to let love happen. But I don’t wait to let things happen. I make them happen. I believe if it’s meant to be, it’s up to me.

“We create our own destiny. If you want something to happen, go make it happen. Even if this doesn’t find the woman I’m looking for (and the odds are it won’t — see [the] Wayne Gretzky quote on the front bumper), it’s fine because I live for the moments, not the milestones. And this car was a hoot just to create it and drive it.” 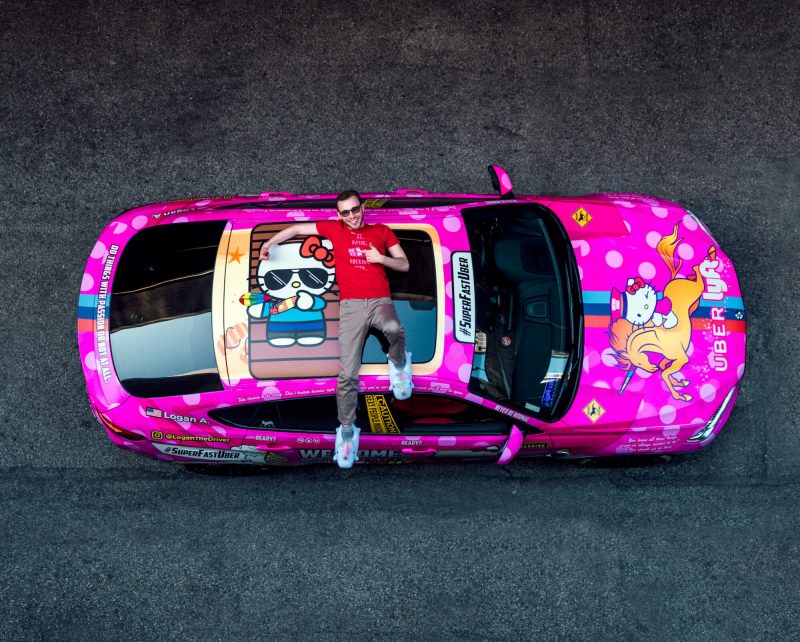