Set in the post-apocalyptic year of 2735, the two-minute spoof for “Star Wars: Rogue WUHAN” is a montage of scenes from various films that feature Chinese actors and extraterrestrial characters, such as “The Wandering Earth” and “The Rise of Skywalker.”

“[Year] 2735. The Chinese have eaten all the animals on the planet … even the pandas,” the video begins. “Some blind people have been caught eating up their Labrador [Retriever]. Viruses expanded by the hundreds. An incredible number of people died.

“Then the Chinese decided to go in space and look for food.”

The video progresses to action-packed scenes showing the Chinese chasing aliens as new sources of food.

At one point, they contract a new “virus” after consuming Star Wars character Jabba the Hutt, a “big slug,” who tells them to “suck my slimy slug c*ck you Chinese b*tches.”

The “film” is supposedly produced by “Harvey Wongstein” and “Tano,” who appear to have uploaded the parody trailer on YouTube first.

The YouTube video, which was posted on April 1 — an apparent entry for April Fools’ — has received more than 82,000 views as of this writing.

Ryan shared the video on his Instagram page a few days later, writing in the caption, “Donald Trump sent me this.”

The 24-year-old grappler echoes the rhetoric of the president, who has faced criticism for repeatedly calling SARS-CoV-2 — the pathogen behind COVID-19 — the “Chinese virus.”

Ryan’s “humor,” however, fell flat for some people, who accused him of being racist for perpetuating such messages.

“Man this is really racist. As I’m sure you’re aware, a lot of idiots listen to you. Whether or not it’s fair, it’s your responsibility to not make them dumber. Heavy is the head … as they say,” one Instagram user commented. 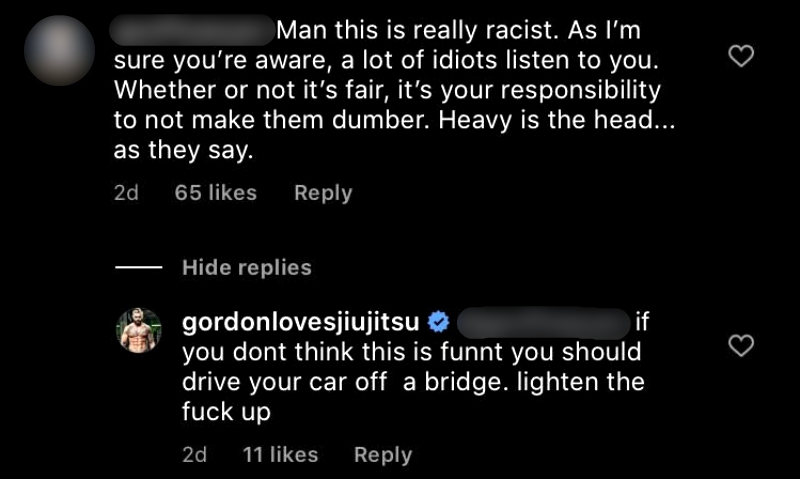 Another chimed in, “Given the platform you have, this is the most ignorant thing you can share with the situation the world is in. Either patiently wait and share some positivity through this or nothing at all. This only adds more fuel to the fire.” 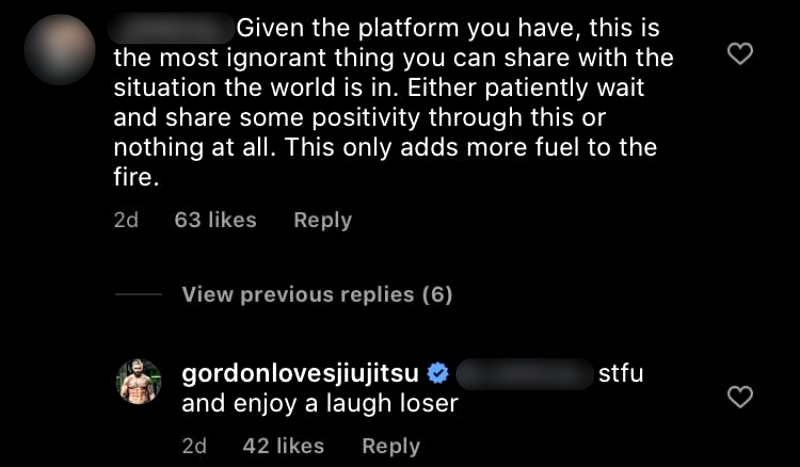 Ryan defended the post, however, insisting that it is not racist but only “comedy.” He also claimed that he is Asian American, so he supposedly “gets a pass.” 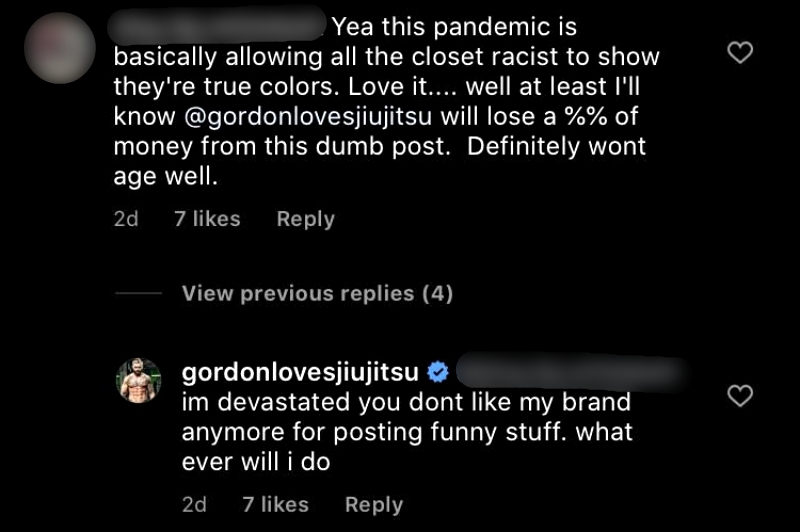 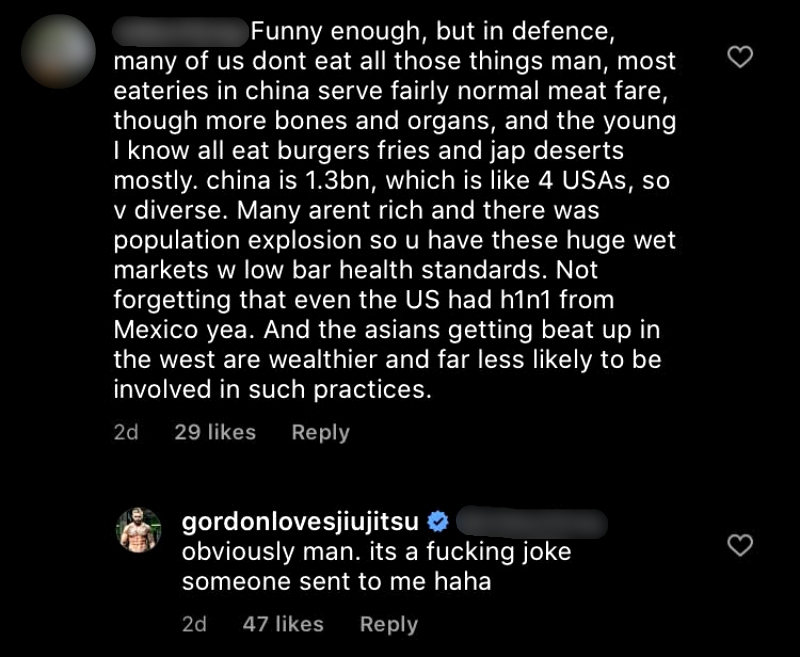 Other comments — including, again, from verified personalities — simply laughed at the video. 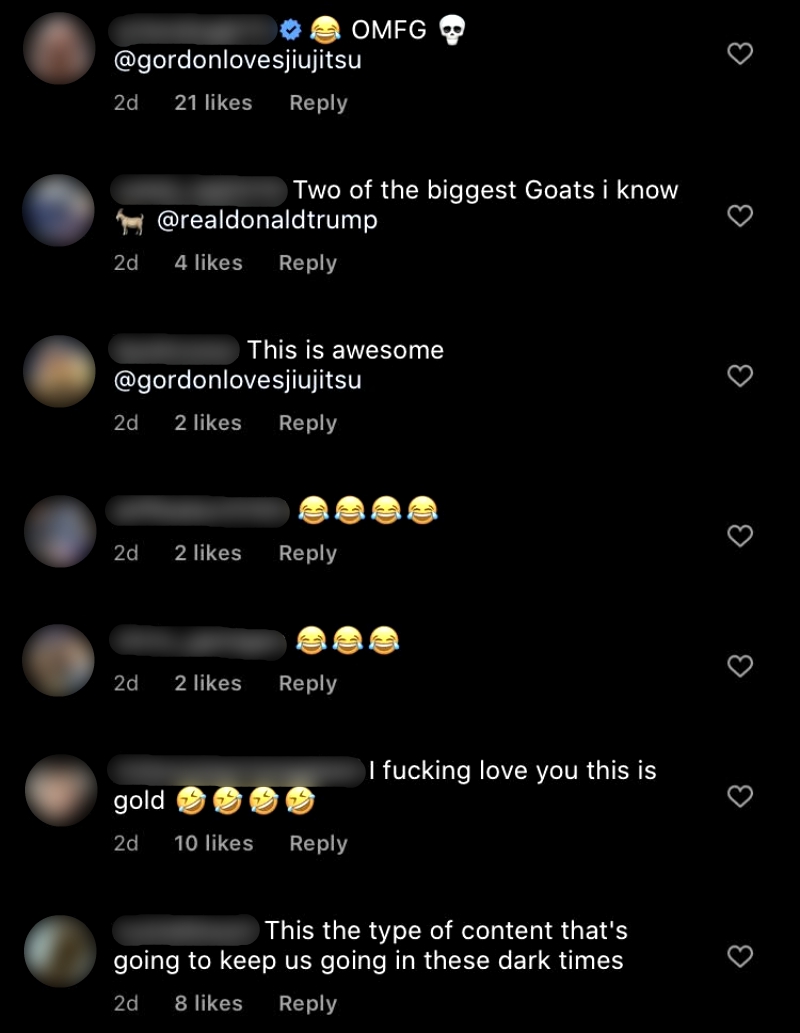