The lead voice actor in Fox’s “Bob’s Burgers” and the FXX series “Archer” has apologized after letting out a “lazy and incompetent” joke that offended Asians and Asian Americans on social media.

The drama started on Sunday after H. Jon Benjamin shared a “quick idea” for a tea shop’s name on Twitter. 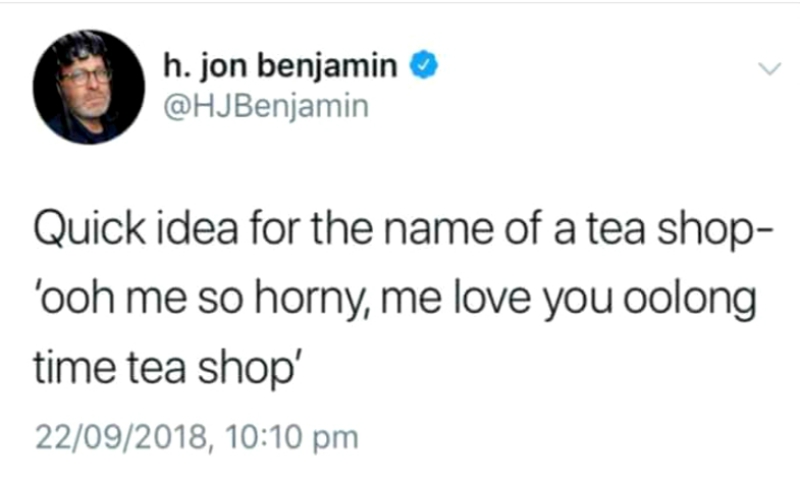 Benjamin, who also plays the lead in FXX’s “Archer,” was quoting a line from “Full Metal Jacket” that has since been used to stereotype Asians.

As such, it’s not surprising that his “joke” fell flat.

White people are at it again. 🤨 https://t.co/PSVCWPXzxb

Dr. Seuss was an occasionally racist pusshound. H. Jon Benjamin is now the spokesperson for Arby’s. Even your heroes let you down. Such is life.

Benjamin has since taken the racist joke down and consequently apologized in a pair of tweets.

“Sorry I offended many. I agree this ‘joke’ was lazy and incompetent and formulated quickly while making a cup of oolong tea. The fact that it was a famous line in a movie does not give me license to make light of the big picture stereotyping of Vietnamese people and Asian Americans in general.

“I’m sorry I ever made that cup of tea. And thanks for making me realize this in quick order.”

Sorry I offended many. I agree this ‘joke’ was lazy and incompetent and formulated quickly while making a cup of oolong tea. The fact that it was a famous line in a movie does not give me license to… https://t.co/H4InIpkZMC

to make light of the big picture stereotyping of Vietnamese people and Asian Americans in general. I’m sorry I ever made that cup of tea. And thanks for making me realize this in quick order

Some thought he didn’t have to say sorry.

Why are you apologizing?

STOP APOLOGIZING FOR JOKES!
IT ENABLES THE INCREDULOUS.

That offended somebody,? I’m offended that that was considered offensive.

At what point do we stop taking everything so seriously and let comedians tell jokes? It’s comedy, it’s meant in jest. Jokes may offend some, but the intent is to get laughs. We are getting to a point where people won’t feel free to speak anymore.

People are too sensitive and have no sense of humor, and have obviously never seen Full Metal Jacket. 🙄

Others accepted his apology.

A sincere apology goes an oolong way. I’m Asain and before my disappointment for that joke could steep, you swallowed your pride by giving some acknowledge-mint to the bitter origins of that expression.

Hello H. Congrats on apologising. This is a textbook example of what to do if you fudge up – delete, genuinely apologise. It’s all good man. Well done. You’re back in the good books 🙂

Apology accepted. For the record, though, we blame inappropriate tweets on Ambien, not oolong tea.

I’m not sure what you’re apologizing for as I missed it and the tweet is deleted, but in any case I always think it’s cool when someone says “sorry I” instead of “sorry you” or “sorry if”.. anyway you’re the man & I watch Bob’s Burgers all day.

However, others can’t let the “joke” go so quickly — especially that those “forgiving” him are not Asians.

Hell naw. I refuse your apology and I’m going to show people how much of a racist you really are for the pure fact that you would think of a “joke” to make light of exploitation of Asian women.https://t.co/JXdXueFIzP

this is the worst more lazy apology i ever seen. youre not even actually apologizing you fat piece of shit.

the problem people had with it wasn’t the laziness or incompetence, it was the racism. which you still haven’t apologized for.

ITT: white people quickly accepting an apology never meant for them. Also white people reassuring you that what you said “wasn’t even racist.” Why are y’all like this

Just look at all the white people defending this guy and even “accepting” his weak ass apology even though they aren’t Asian. STFU and don’t speak on our behalf.