In an extreme act of religious penitence, a small group of Catholics in the Philippines expressed their devotion by getting themselves nailed to the cross on Good Friday.

The tradition involves a re-enactment of the “Passion of Jesus” at the Calvary in which devout believers engage in self-flagellation, carrying the cross, and the crucifixion itself for those who want to somehow imitate Christ’s sufferings.

A regular participant in such rites is 58-year-old devotee Ruben Enaje, who has been nailed to a cross every year for the last three decades, CNN reports. 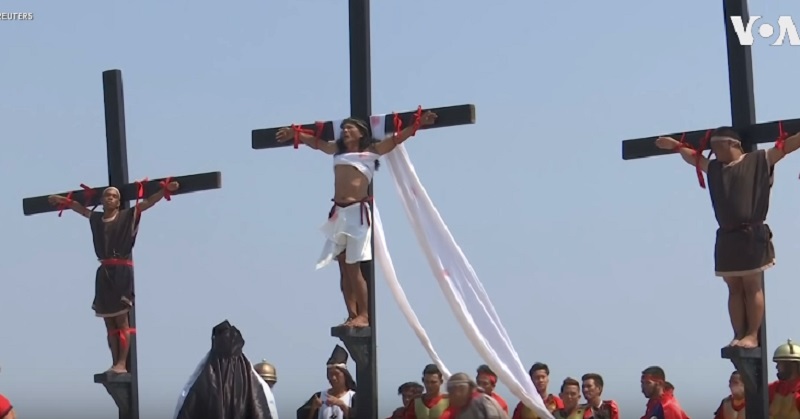 On Friday, it was his 33rd time portraying the death of Jesus Christ at the mock Calvary in San Pedro Cutud village in Pampanga province.

“More than penance, this is a solace for me,” Enaje was quoted as saying. “I feel relieved and happy after every crucifixion because I know that I said my prayers in the best way I can.”

Like many of the participants in such tradition, his annual sacrifice has also become part of his commitment to his village.

“As I carry the cross and be nailed on it, all I do is keep praying, ask for forgiveness and give thanks for all the blessings I have received for the whole year, and ask for another bountiful year.”

According to Enaje, he is ready to give up the role if someone decides to take it from him.

“I am turning 59 years old this coming July I am getting old and my body can barely handle the physical pain of my penance.”

“But I have to consider our village officials. They told me that they still cannot find somebody who can replace me for the role of ‘Kristo’.

“Hopefully we can find my replacement soon because as much as I want to do this, I cannot promise until when my body can take the physical pain.”

While the Philippine Catholic Church has repeatedly expressed disapproval of the penitential practice, it has somehow persisted among a small number of devotees.

Even the government has been unable to deter participants from the tradition. The Department of Health has encouraged them to at least have tetanus shots and use sterilized nails.