Netizens targeted critics Manohla Dargis and A.O. Scott for not including the film in The New York Times' year-end list of best movies

“Everything Everywhere All at Once” co-director Daniel Kwan wrote a series of tweets urging fans to “cool it on the aggression” toward film critics.

Kwan, who directed the film with Daniel Scheinert, took to Twitter on Thursday after seeing outraged social media users criticize The New York Times and its film critics Manohla Dargis and A.O. Scott for not adding “Everything Everywhere All at Once” to their “Best Movies of 2022” list. Scott earlier reviewed the movie in March for The Times, designating it as a “Critic’s Pick” and describing it as “glorious” and “messy.”

Some fans reportedly called Scott “pretentious” and an “upper middle class zealot.” They also expressed disappointment after seeing that films such as Jordan Peele’s “Nope” had made the cut while “Everything Everywhere All at Once” did not.

“The algorithm pushed this onto my timeline, and as one of the people who made the film, this aggression will not stand, man,” Kwan wrote in response. 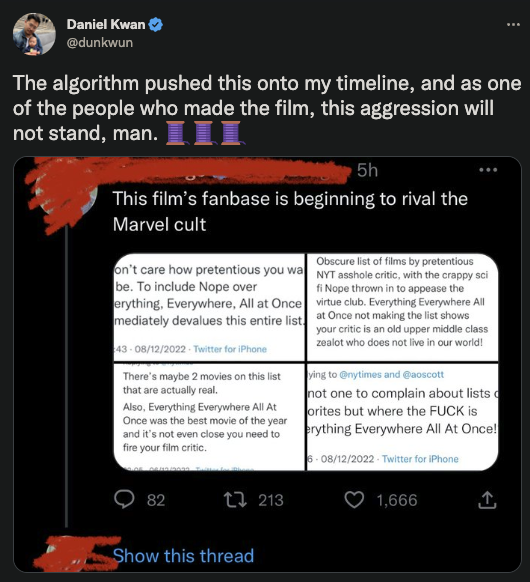 The 34-year-old co-director also stated that ranking art in general is “so absurd and should only be seen as an incredibly personal and subjective endeavor.”

In another tweet, he expressed appreciation for the praise that fans have showered his movie with, adding that having been able to create art that has sparked conversations and connections “with so many passionate people is enough.”

Kwan also encouraged fans to sort through their negativity by urging them to “take a step back” and “remind yourself why you fell in love with our movie” the next time they come across criticism about the film.

In the thread’s final tweets, Kwan wrote: “Anyways, if anyone spots a fan who gets too excited and crosses a line, please feel free to send them this tweet below. … Hi, I’m Dan Kwan, one of the directors of EEAAO. I appreciate your love of the film, but maybe next time you can try to cool it on the aggression. This place is filled w/ shitty discourse, don’t add to it (what would Waymond do?). Don’t feel bad, its tough to keep ur cool here.”

As of this writing, Kwan’s thread has received over 12,400 likes. 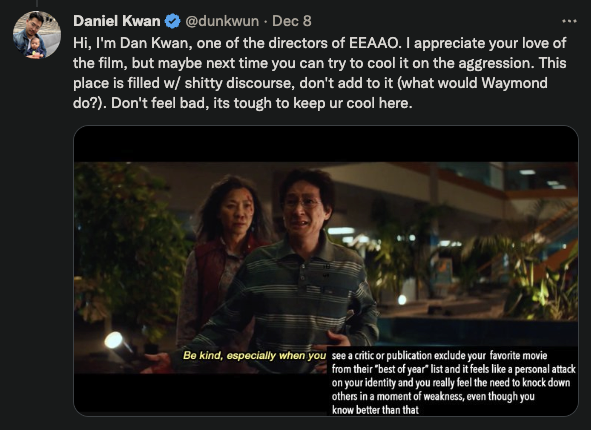 Featured image via Hollywood Reporter / A24