Presidential candidate Andrew Yang was joined by his wife Evelyn in his third guest appearance on ABC’s “The View” on Wednesday.

At the start of the interview, the 44-year-old entrepreneur was asked to comment on the recent killing of Iranian commander Qassem Soleimani.

Calling President Donald Trump’s decision a “mistake,” Yang said he would not act similarly as president, noting that he believes the American people are looking for a commander-in-chief with “the right temperament, judgment and values.”

“The story seems to be that a number of solutions were represented to President [Donald] Trump and he chose the most dramatic option that even the military leaders would never have expected,” Yang said.

Yang added that he would push the power to declare war back to Congress, “where it belongs in our constitution.”

Later in the show, “The View” host Joy Behar asked Evelyn what she thought about her husband’s rise in popularity.

“Amazing. When he first told me he was running for president, I have to say, I thought it was a phase. I get it, it was after the last election, he was pretty frustrated. But, you know, I think this is his passion coming through,” Evelyn shared. 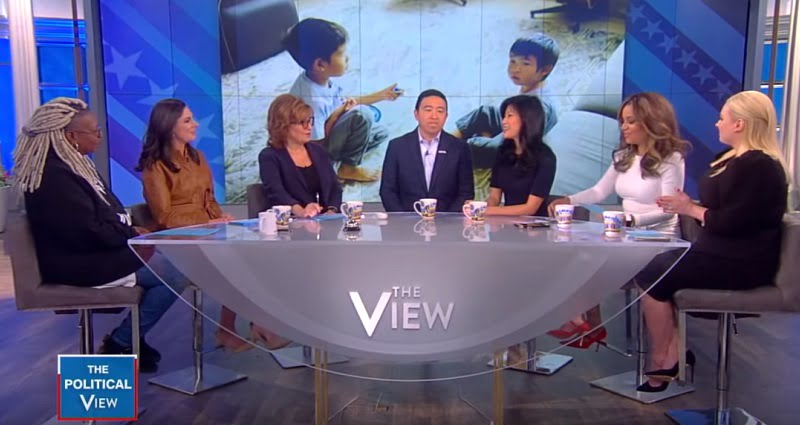 “He convinced me,” she continued.

“When he started talking about the solutions that he had for the country and, I was like, these solutions should exist. This is a good message but maybe you don’t have to be the one to deliver it, you know? You can go out there, you can deliver it, and people will pick it up. When candidates start entering the race, they’ll see that these are really practical, doable, solutions that can improve the lives of everyday Americans. And he said, ‘All right, well I’m not too sure about that but let’s try, right?”

Evelyn went on to say that her husband’s message has been resonating with people.

“That’s the reason why he’s come so far. I think people can also tell that he’s also a really genuine person, you know? What you see is what you get,” she went on.

The statement received applause from the audience and the hosts agreed.

Andrew, with appreciation, turned to his wife and said, “Thanks, baby.”

Host Abby Huntsman then asked Evelyn about their eldest son, Christopher, who is on the autism spectrum.

“How did that diagnosis change your family and change just the way you think about things?” the host asked.

“Christopher is so awesome,” Evelyn shared. “He’s just a wonderful kid. He made us parents but he also made us better people. Andrew talks about all the time, how grateful and how blessed we are to have our two beautiful children but, you know, the diagnosis is always difficult… You don’t imagine this for them and then it happens.”

“For far too many Americans, they’re faced with this reality and they don’t have the resources that they need to get their child the support that he or she needs. We’re very lucky to have those resources so it’s been really important for us to share our story and just spread this awareness so that people know that it’s much more common than you think.”

Evelyn has joined her husband on the campaign trail. Together, they have hosted events centered around supporting other families who have children with special needs.

“I mean, Andrew talks all the time about how ‘atypical is the new typical.’ We all know someone who’s neurologically atypical or has a disability or special needs,” she went on. “This is America and we need to make America accessible for all and have those supports. It breaks my heart when I talk to families who don’t have what they need and are just struggling to get by and give their child you know what they know they need.”

Co-host Meghan McCain then commented that Evelyn “sounded like a first lady” to her before shifting to a question for Andrew, asking if he’d consider running for vice president under candidate Joe Biden.

In response, he said that he’d be open to being a VP pick for any of his fellow candidates or serve in any capacity to help the American people.

“I’m here to help solve the problems that affect us all that we are leaving for our kids. If that’s as president, great. If that’s in some other capacity, also great — because we all need to do more to help build the country,” he said.

Andrew’s answer earned another round of applause from the audience and the panel.

When McCain pressed the couple if they would actually consider it, Evelyn said she would have to think about it.

“It would have to be a conversation, you know, like the conversation when we first embarked on our journey,” she explained.

Andrew then said, “When people thank me for running, I say, ‘Thank my wife, one, for letting me run and two, for sacrificing so much while I’ve been on the road,’ so, thank you, baby.”

Feature Image via The View