MTV released reality star Dee Nguyen from the “The Challenge” after she made insensitive comments about the Black Lives Matter movement on social media.

The 27-year-old Vietnamese Australian cast member drew backlash over the weekend for the manner in which she defended her support of Black Lives Matter.

“IDK why some of you think I’m anti-BLM. I’ve been saying that since the day I lost my virginity,” she wrote in a now-deleted tweet. 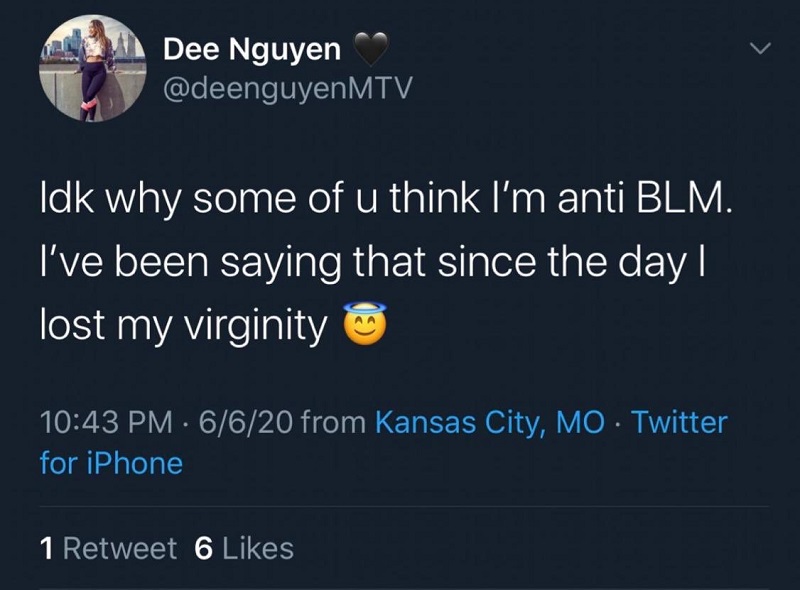 Followers were quick to point out the insensitivity of her post. 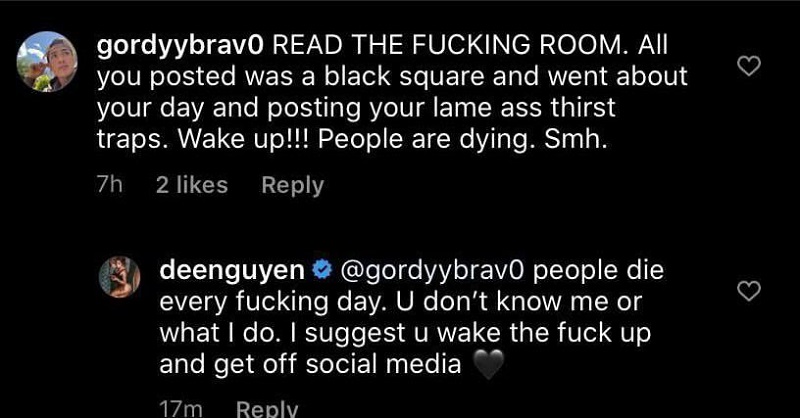 Following the backlash, the official Twitter account for the reality show posted a statement on Monday condemning the comments.

“As a result of Dee Nguyen’s offensive comments on the Black Lives Matter movement, we have severed ties with her,” the statement read. “Out of respect for our Challengers, we’ll air our season as planned. We strongly condemn systemic racism and stand with those raising their voices against injustice.”

As a result of Dee Nguyen’s offensive comments on the Black Lives Matter movement, we have severed ties with her. Out of respect for our Challengers, we’ll air our season as planned. We strongly condemn systemic racism and stand with those raising their voices against injustice.

Nguyen also received criticisms from her costars, including Tula “Big T” Fazakerley and Bayleigh Dayton, who were “disgusted and disappointed” by her post.

THIS IS NOT HOW YOU SUPPORT BLM. I’m disgusted and disappointed. THIS IS NOT A TREND. THIS IS LIFE OR DEATH FOR US. Posting for clout about the death of black people? Shame on you @deenguyenMTV pic.twitter.com/pAw4KQKy30

According to Fazakerley, Nguyen’s words did not surprise her.

“She said she was ‘blacker’ than me because I didn’t know the name of a musician and because she hadn’t seen me fight and be aggressive,” she said during a recent Q&A with fans via Instagram Story. “I felt like she was trying to make me fit her idea of a ‘stereotype.’..after seeing her tweets it just infuriated me even more and felt like I should be honest about my experience.” 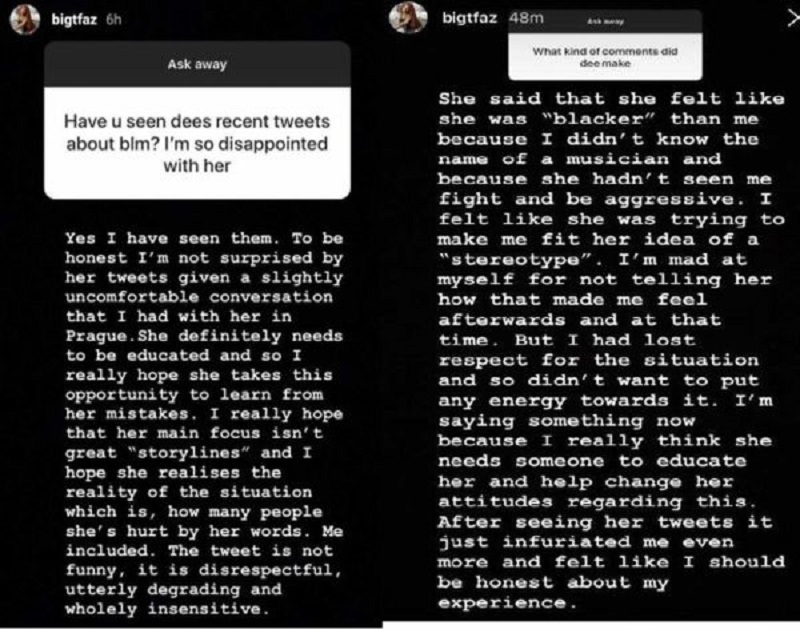 Nguyen took to Twitter again on Sunday to express her apology.

“I am sorry for the insensitive tweet I posted earlier. I was being defensive and not speaking from my heart. But there’s no excuse. I also want to extend an apology to Bayleigh and Swaggy- who are my cast mates and deserve my respect and compassion,” Nguyen wrote.

She said she would not be live-tweeting this week to “recoup and rehabilitate” her mental health. She later posted a full apology which has since been deleted from her Instagram and Twitter accounts.

“I would like to offer my sincerest apology to my colleagues whom I have hurt directly and indirectly due to my insensitive remarks,” she wrote. “Let me be clear I am a POC that cares about BLM.”

Nguyen’s management team released a statement saying they are conducting “an internal review as this situation unfolds.”

Repost from @blvkmanagement • At this time our team wanted to kindly state we stand strong behind our fellow MTV client @deenguyen We respectfully ask your outlet or business organization to let our team conduct an internal review as this situation unfolds. Our team is as shocked as you could imagine and would like to affirm that BLVK does not tolerate any form of racism what so ever we also have an obligation and duty to our clients to ensure their voices are heard and if any of them have made a mistake allow them to have the opportunity to fix it or clarify it – we are working on this as we speak and ask for some patience before any further decision is made. Thank you