Armenian American actor and internet personality, Dan Bilzerian has come under fire for calling the novel coronavirus the “Chinese virus” — a term the World Health Organization (WHO) and the Centers for Disease Control and Prevention (CDC) has repeatedly discouraged for its harmful consequences.

In an Instagram post on Thursday, Bilzerian commented on the COVID-19 isolation of Joe Exotic, an incarcerated zoo operator who was convicted of hiring a hitman and is now the subject of a seven-part Netflix documentary called “Tiger King: Murder, Mayhem and Madness.”

“Just when I think shit can’t get more fucked up, the Chinese virus got Joe Exotic,” Bilzerian wrote in his post, which featured a photo of Joe — altered with Bilzerian’s face — sitting next to a tiger.

The 39-year-old internet personality, also known as the “Instagram King,” follows the lead of President Donald Trump, whom he endorsed for office in 2015.

Just when I think shit can’t get more fucked up, the Chinese virus got Joe Exotic

For weeks, Trump and his congressional allies have faced backlash for referring to the novel coronavirus as the “Chinese virus” or the “Chinese coronavirus.” The accurate term for the pathogen is severe acute respiratory syndrome coronavirus 2, or SARS-CoV-2. The disease that it causes is called COVID-19.

“It comes from China, that’s why,” Trump said in defense of his use of the term.

“Don’t attach locations or ethnicity to the disease, this is not a ‘Wuhan Virus,’ ‘Chinese Virus’ or ‘Asian Virus,’” the WHO tweeted last month. “The official name for the disease was deliberately chosen to avoid stigmatization.”

DO – talk about the new #coronavirus disease (#COVID19)

DON’T – attach locations or ethnicity to the disease, this is not a “Wuhan Virus”, “Chinese Virus” or “Asian Virus”.
The official name for the disease was deliberately chosen to avoid stigmatizationhttps://t.co/yShiCMfYF3 pic.twitter.com/belHrq5HVo

The CDC echoed this message in a congressional hearing on March 10. When asked whether it is “absolutely wrong” and “inappropriate” to call the disease “Chinese coronavirus,” Director Robert Redfield replied “yes.”

Persistent usage of these problematic terms is now being seen as a factor influencing the increase in hate crimes against Asian Americans and Asians around the world. Such forms of racism and xenophobia have particularly surged online, with the cyberbullying of Chinese people reportedly up by a staggering 900%.

As of this writing, Bilzerian’s post has racked up 1.2 million likes, but many criticized his use of the term”Chinese virus.” Nonetheless, he retaliated in the comment section, telling a critic to “shut the f*ck up.” 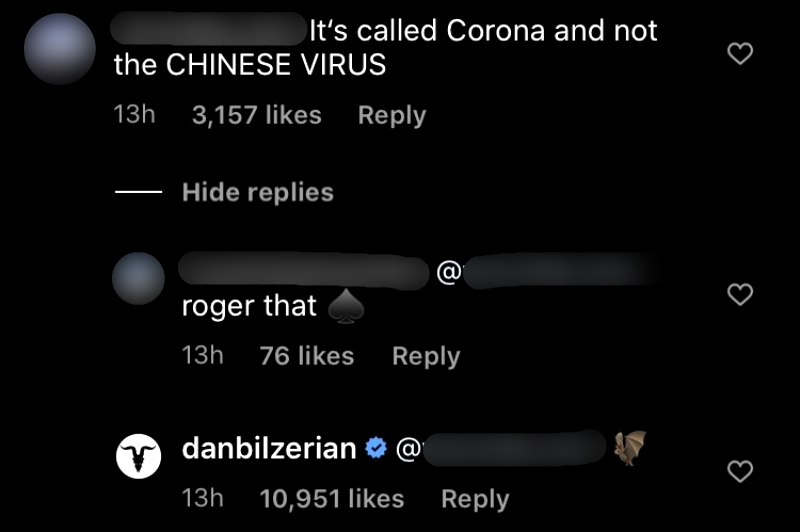 Interestingly, top comments under Bilzerian’s post have come from personalities with verified badges — and most seem unconcerned with his use of the term.

Bilzerian appears to have published anti-China messages elsewhere, however. His current pinned post on Twitter reads, “All this sh*t cuz some dirty motherf*ckers wanna put bats in their soup.”

The Chinese govt lied about their numbers and now those cocksuckers have killed the main whistle blower, the head of a hospital, and other health workers trying to warn people