When ABC announced that “Fresh Off the Boat” had been renewed for a sixth season on Twitter, fans of the show expressed excitement, with many cheering the cast for their success.

The Huangs are back! #FreshOffTheBoat is returning for Season 6! 🎉 pic.twitter.com/WvgDPT57AD

However, some have noticed the show’s lead star Constance Wu was apparently reacting negatively to the news.

In a tweet following the announcement, she wrote: “So upset right now that I’m literally crying. Ugh. Fuck.” She then followed it with another tweet, stating: “Fucking hell.”

While the post can be construed as random post not connected to ABC’s announcement at all, her reaction to a congratulatory comment from a fan could prove otherwise.

When a netizen responded with, “Congrats on your renewal! Great news :),” the actress who plays Jessica Huang on the sitcom, replied, “No it’s not.” Her response has since been deleted. 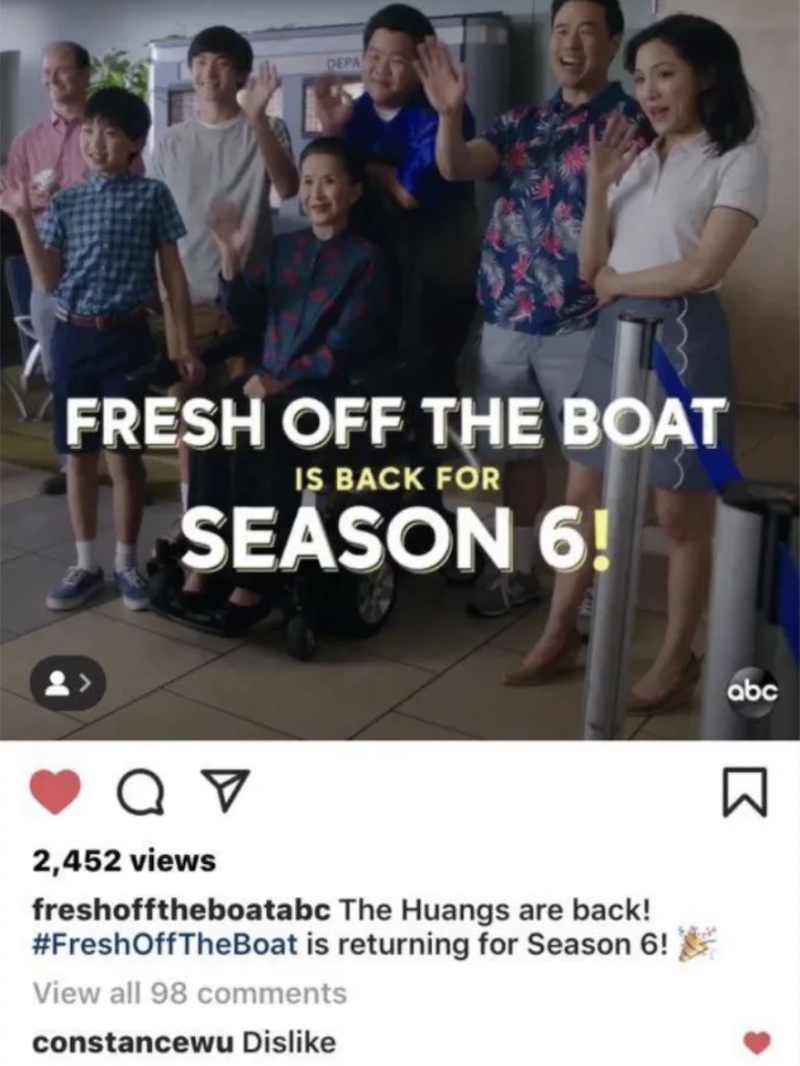 Wu also wrote “Dislike” as a comment on a gif of the cast Fresh Off the Boat’s official Instagram account posted announcing the return of the show for Season 6. The comment has been removed as well.

‪The Huangs are back! #FreshOffTheBoat is returning for Season 6! 🎉‬

Netizens have found Wu’s reaction puzzling, with many asking why the actress would not be happy with the upcoming season. 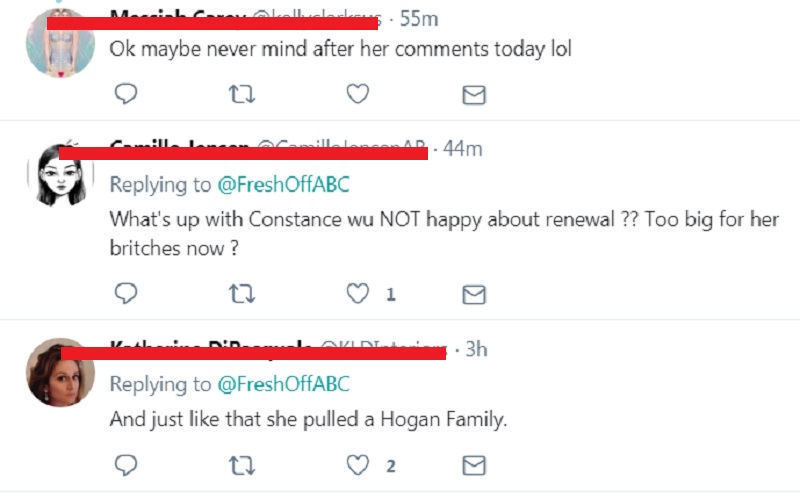 One Twitter user criticized her for pulling a “Hogan family,” referencing the defunct 80s sitcom that was initially a starring vehicle for actress Valerie Harper.

In a later tweet, Wu said everyone was merely “making a lot of assumptions about what [she] was saying.”

Hinting that it was all just a misunderstanding, she then wrote another tweet saying her earlier messages were “ill timed w/the news of the show.”

Earlier today, she tweeted a much more in-depth explanation.

These words are my truth. I hope you hear them pic.twitter.com/l6SvbFcUlj

It was just last month when Wu celebrated the show’s 100th episode by posting a video of her lipsyncing a Beastie Boys rap song with her co-stars.

Forgot to post on Friday but… Congrats everyone at @freshofftheboatabc on our 100th episode! It seems unreal to think we have shot 100 episodes of network television holy crap! 😱🤗 FOTB was my first ever network TV pilot! Wow! I am so grateful for the cast and crew, for their incredible talent and hard work and kindness, especially during my first two seasons—-I was often overwhelmed and scared during those first two seasons because I came from a theatre background…so the TV world was new to me: the culture, the process, the schedule, the personalities were all so different, even the terminology—I didn’t know any of it 😳 Grateful ❤️ I’ve learned so much from this show, including how to rap!! (Badly 😬) So in that spirit, here is a video of us being Beastie Boys (and girl) I think this video is from last week’s episode? #freshofftheboat Also big thanks to @mreddiehuang for his true bold voice without which, I wouldn’t be where I am today. Eddie you have a courage and humanity that is so special ❤️ love you, grateful for you.