Meet the Stanford Student Who Could Revolutionize How We Treat Epilepsy

When talking to Christine Liu, I often found myself forgetting that she’s still only a sophomore at Stanford. Looking back, it’s not hard to see why.

For starters, she’s got a resume to make even the most draconian of tiger parents proud, boasting a published scientific paper (with another one in review), a startup, and an international science fair medal — all by the age of 19. Her winning science fair project, a machine learning algorithm for predicting epileptic seizures, has the potential to radically change the way we approach epilepsy health care. Yet, what stood out the most, above and beyond her myriad accomplishments, was a very distinct sense of maturity, of wisdom beyond her years. There’s a purpose to her ambition, one rooted in personal experience and a deeply intrinsic desire to succeed — maturity was simply a requisite. 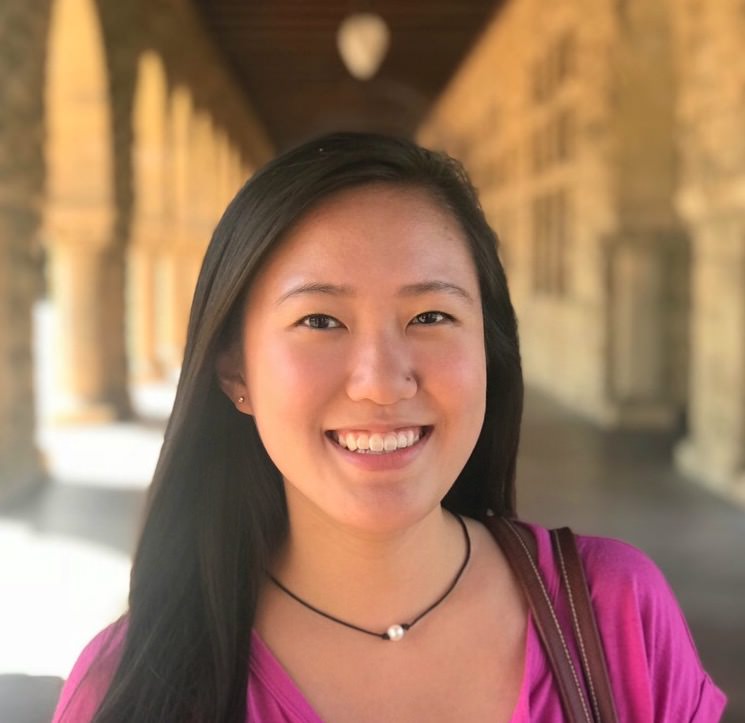 Most college students have no idea what they want to do in the future, let alone have clearly delineated research interests.

But Christine is not your typical college student, and her research interests are more than well-defined. They lie at the intersection between neuroscience and technology, an exciting field that applies the cutting edge of machine learning and artificial intelligence to the ever-pressing concerns of biomedicine and health care. As a prospective Biomedical Computation major with a minor in Electrical Engineering, she aims to combine computational approaches with medical science to improve the way we treat neurological diseases, with a particular focus on epilepsy.

“I started doing research my sophomore year of high school,” she told me during our hour-long phone conversation. “I kind of always had an interest in epilepsy [as] my younger brother was actually diagnosed with epilepsy when he was 2 years old, and he had his first seizure when he was, I think, 6 months old.”

Epilepsy, a neurological disorder characterized by recurring and uncontrollable seizures, is thought to affect over 50 million people worldwide. The cause of the disorder is generally unknown and there is no cure available, although medication can be useful in controlling seizures for many patients.

“Just kind of going through the journey, just seeing my brother have to undergo these 24 hour EEG’s [electroencephalography] and also just seeing him struggle with living with this condition,” she reflected, “[…] I think it just kind of struck some cord in me that [made me] want to pursue a better understanding of what epilepsy was and to explore and grasp a better understanding of what people were doing to develop solutions and cure this disease.”

Christine reached out to a professor at Emory University who, to her surprise, responded; after getting to know each other over coffee, the professor was impressed enough to offer Christine a position in the lab. Perhaps it was a gamble to take on a high school student with no programming knowledge at the time, but it was one vested in the principle that passion tends to win out, and Christine clearly had lots of it — not to mention no shortage of intellect.

By her senior year, she was working on an independent research project, albeit under the guidance of another professor at Emory. Having taught herself Python and machine learning through Coursera, Christine played around with a bunch of data both already collected by the lab and from the internet, and developed a machine learning model that could predict the onset of epileptic seizures with “semi-successful […] accuracies and sensitivities.” The project won her a Grand Award at the Intel International Science and Engineering Fair, the largest and most renowned global high school science event in the world.

“It was pretty cool; it was a nice experience.” 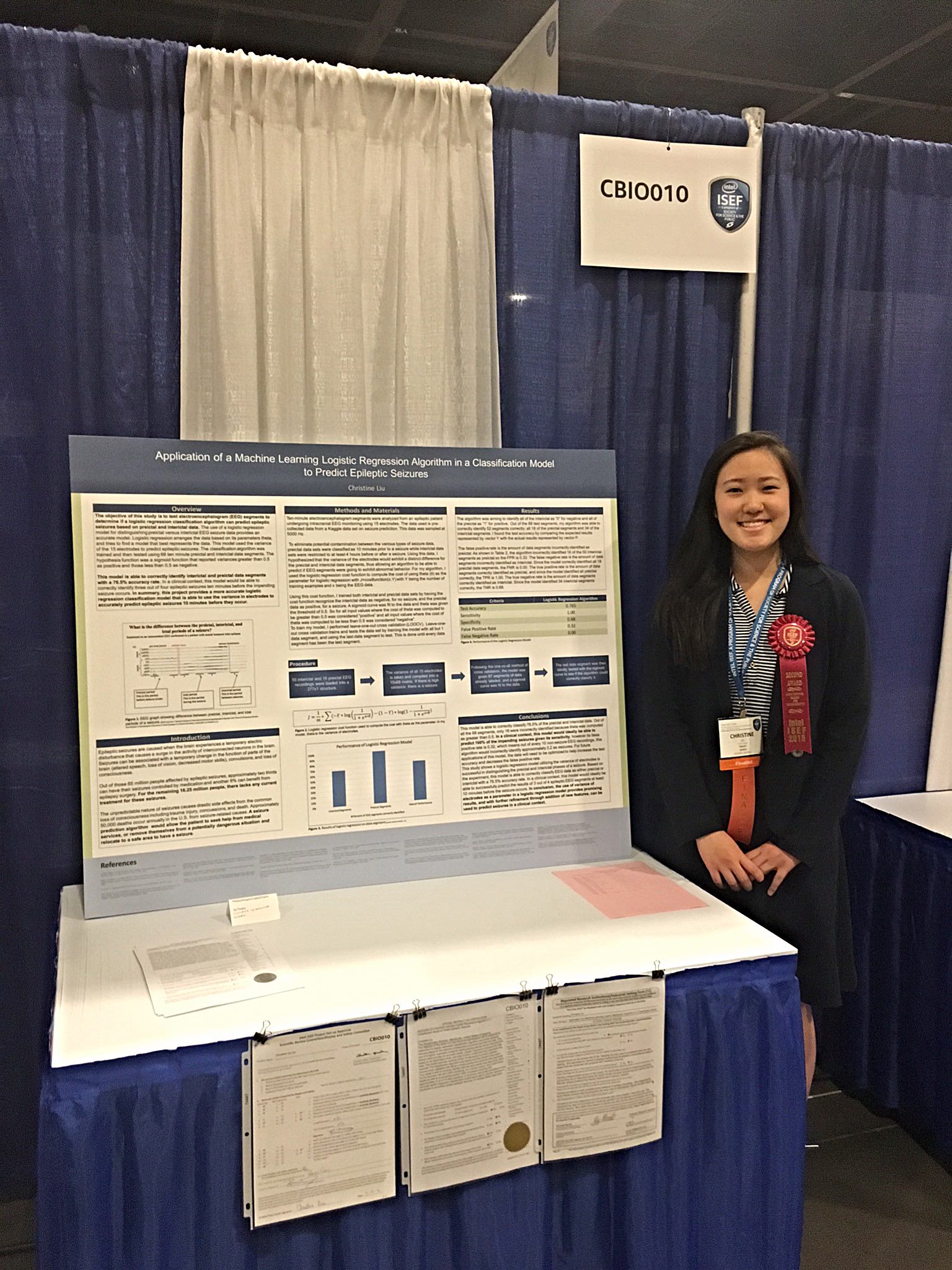 Fast forward two years: Christine, now at Stanford, is building off of her award-winning model in the hopes of developing an actual wearable device that could change the lives of epilepsy patients.

Her research has two streams: prevention and prediction. Under prevention, Christine is contributing to work pioneered by Stanford scientists in which light is used to “induce a change in the electrical channels in the brain,” a field known as optogenetics. If refined enough, the technique offers a potentially non-invasive way to stop seizures in their tracks.

Perhaps more immediately actionable, and more closely related to her high school work, is the side of prediction — if we can accurately predict and warn patients when a seizure is going to occur, health outcomes would significantly improve because, as Christine explained, the side effects of unexpected epileptic attacks are usually more dangerous than the seizures themselves.

“A lot of patients and people have told me stories of people that had epilepsy and ended up driving in a car or were swimming and they had an epileptic seizure and they either crashed the car or drowned or something happened to them. The idea is that if you have some sort of device that is accessible and fits with their day-to-day schedule, then you could be constantly aware of when you could possibly have a seizure and so, if you’re driving or something, you could pull to the side of the road.”

The vision is simple: “super sleek and slim, something waterproof and something worn like a headband so you can still get the neural activity [which] corresponds to an app on your phone.” The app would notify the patient of an impending seizure, and offer hot keys for emergency contacts — she’s more or less already programmed all of that.

Of course, while the technology is there, the actual implementation of such a device has presented a challenge Christine hadn’t quite anticipated. Besides the obvious technical and aesthetic concerns (how do they fit a full-fledged EEG, necessary for collecting electrical data from the brain, into a wearable device without making it look like they’re walking around with a helmet?), there’s the question of safety, and getting it approved and ready to roll out.

“How does it do with water? It’s waterproof, but can I wear this while hiking or swimming or showering? Will this give me cancer? […] Does it have radiation? A lot of random health issues that I didn’t think about while making this device because I was so focused on the result and the functionality of the device.” 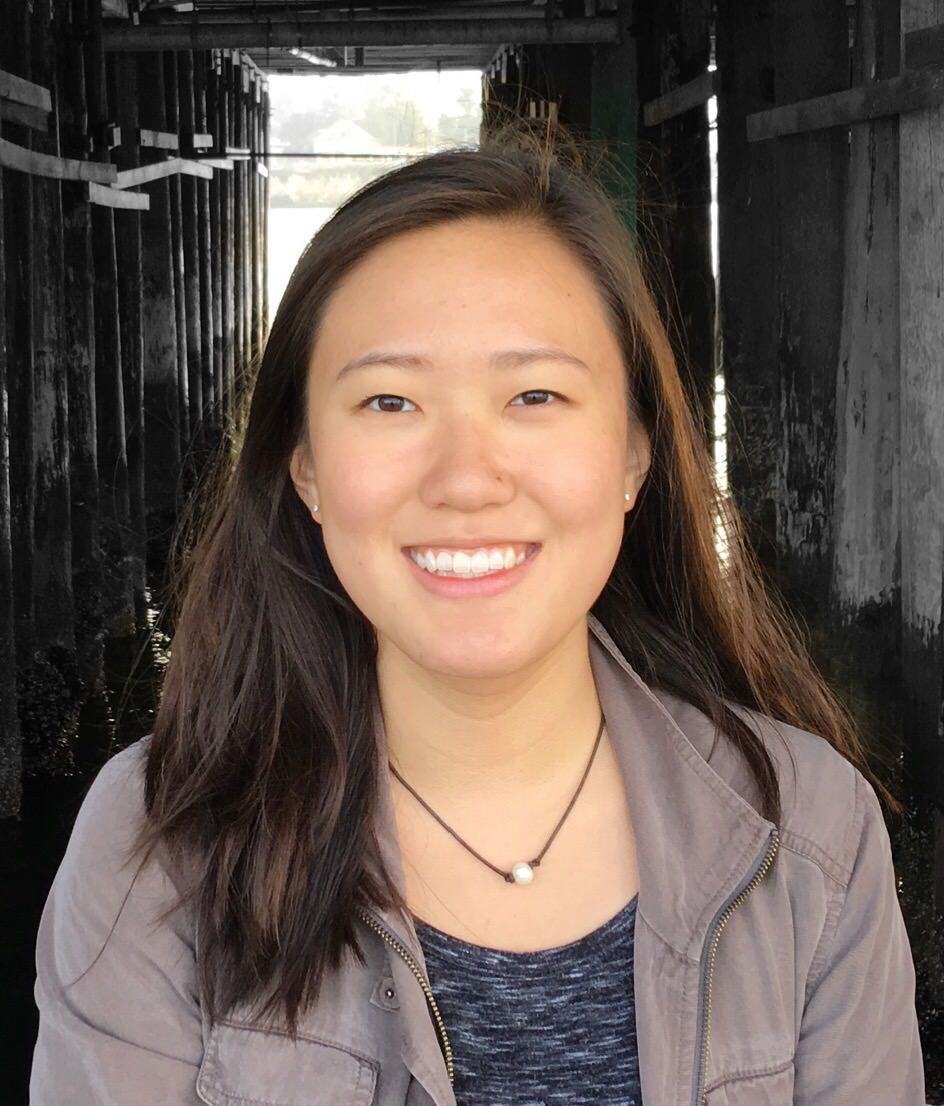 The experience has given Christine a first-hand look into the disconnect between fundamental research and societal application. “The gap between the research bench and the patient is something that the entire medical and research world is struggling to overcome,” she said.

Nevertheless, Christine continues to chug away at it. She balances her research work with a rigorous full-time course load, several leadership roles and a completely separate venture called KYCK Inc., where she’s the co-founder and CTO. The startup is currently focused on providing an easy solution for energy optimization, replacing the unhealthy but ubiquitous energy drink with a simple, dissolvable caffeine strip. In the long run, however, Christine envisions a pivot towards the medical field: instead of caffeine, the strip would deliver medication, providing an invaluable resource for those with difficulties swallowing pills.

With all of this experience, it would appear that Christine has firmly established her place in an industry which, to this day, is still dominated by men. And by all means, she has; you’d be hard-pressed to find many people, male, female or otherwise, who are as distinguished at such a young age. She’s a burgeoning role model for women in STEM, that goes without saying. But that doesn’t mean the adversities faced by women in STEM have escaped her.

“I think the first time I really questioned everything was the time when I first came into the lab in my sophomore year [of high school],” she said when asked about her thoughts on being a woman in tech. “I remember the first time I walked into that lab, I was like 14 years old – I don’t know if I had really worked in a professional setting before – and I was super excited and optimistic and I remember walking into the lab and everyone except for one person was male at the lab meeting and I was just… disappointed, I guess, is one way of putting it. I just remember thinking, ‘oh, this kind of sucks [that] there’s only one other woman in this entire lab among all these super accomplished people.’ There was just a moment in my mind where I thought, ‘do women not do this?’ ‘Is this something I’m not supposed to do? Is this a field where I can pursue a career?'”

Evidently, Christine was able to move past those initial feelings of uncertainty. Unfortunately, many women don’t. Even when the interest and talent is there, poor representation and stereotype threat often push young people away.

“I think just feeling like you belong is a big part of it, because so often there’s so many women that have the skills and have the ability to succeed, but the problem is just having that confidence.”

Instilling that confidence, she believes, is simply a matter of outreach and normalization.

“I think it’s really important that we kind of bring computer science to a universal standpoint and kind of teach children, and women in particular, the basics and fundamentals from an early age so that when they come to university or get into industry, they aren’t intimidated.”

That kind of universality will take time, but in a world where programming skills are becoming increasingly desired and valued, it’s not too farfetched at all to imagine a society in which coding skills are taught with the ubiquity as, say, writing and reading. After all, as Christine believes, anybody can learn how to code; the problem is convincing them that they should.

“If I think [about] where my technical skills were five years ago versus where they are now, it honestly amazes me how you can come from a background with no computational skills whatsoever to a point where you are implementing these high level machine learning and deep learning algorithms with relative ease.”

She’s highly optimistic about the future. Given her proximity to the heart of Silicon Valley, that’s a very promising thing to hear.