MMA has developed a cult-like following across various countries — acknowledged and respected for the physicality of the sport as well as the difficulty of mastering all areas of martial arts.

MMA has developed a cult-like following across various countries — acknowledged and respected for the physicality of the sport as well as the difficulty of mastering all areas of martial arts.

However, for the uninitiated, the world of MMA is clouded with misconceptions that could deter many from exploring a lesser-known side to the popular sport and their athletes.

As I was preparing to meet with ONE Championship’s ONE Lightweight World Title holder, Christian “The Warrior” Lee, I expected nothing but brute strength and force from the 21-year-old champion. What I saw, however, was something else entirely.

Perhaps the biggest misunderstanding surrounding professional fighting is that male fighters embody traits associated with toxic masculinity and these fighters know nothing but exerting force and dominance.

In every way, Christian is this powerful fighter — a force to be reckoned with. As a room full of students and guests in the United MMA & Fitness Center in Oahu, Hawaii watched him train, young children and adults alike were mesmerized. The sound of force coming from his precise punches and kicks could be heard like gunshots even outside of the room.

However, as soon as he stepped away from the mats, I saw him speaking softly with young students who looked up to him, as well as his fiancée who was waiting for him on the sidelines. That’s when I realized, there was so much more to this young, successful MMA fighter than what is seen in the cage.

“MMA’s really for everyone,” Christian told me while taking a break from his training. “Of course, it has the image that it’s all about these tough guys who want to become fighters, but it’s also for kids, even very young kids who are just learning how to walk all the way up to seniors who want to stay active.” 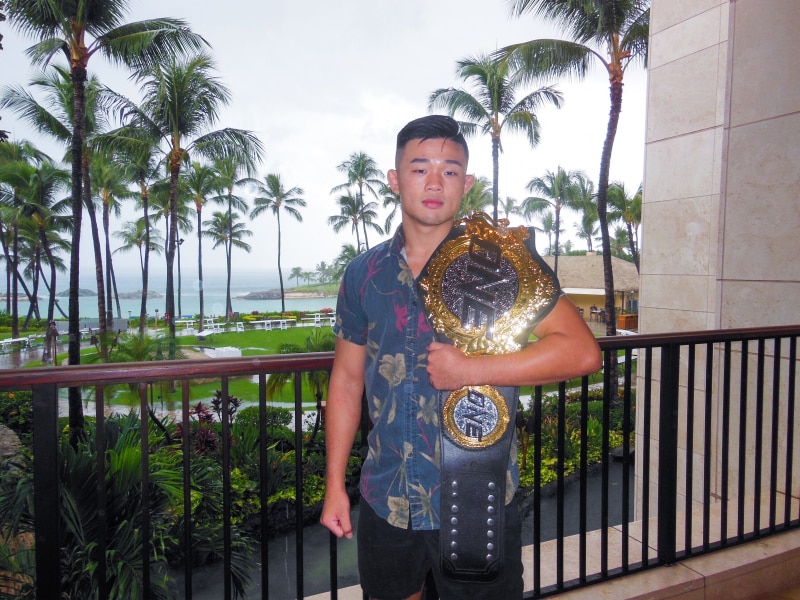 From the corner of the United gym, I was able to observe the sheer diversity in the space; people of all sizes, backgrounds and even ages.

“We even see older men in their 50’s and 60’s who still get on the mats and train. I think that’s what it’s all about — staying fit and just learning how to understand your body and learning martial arts,” he said, looking around his family’s gym. 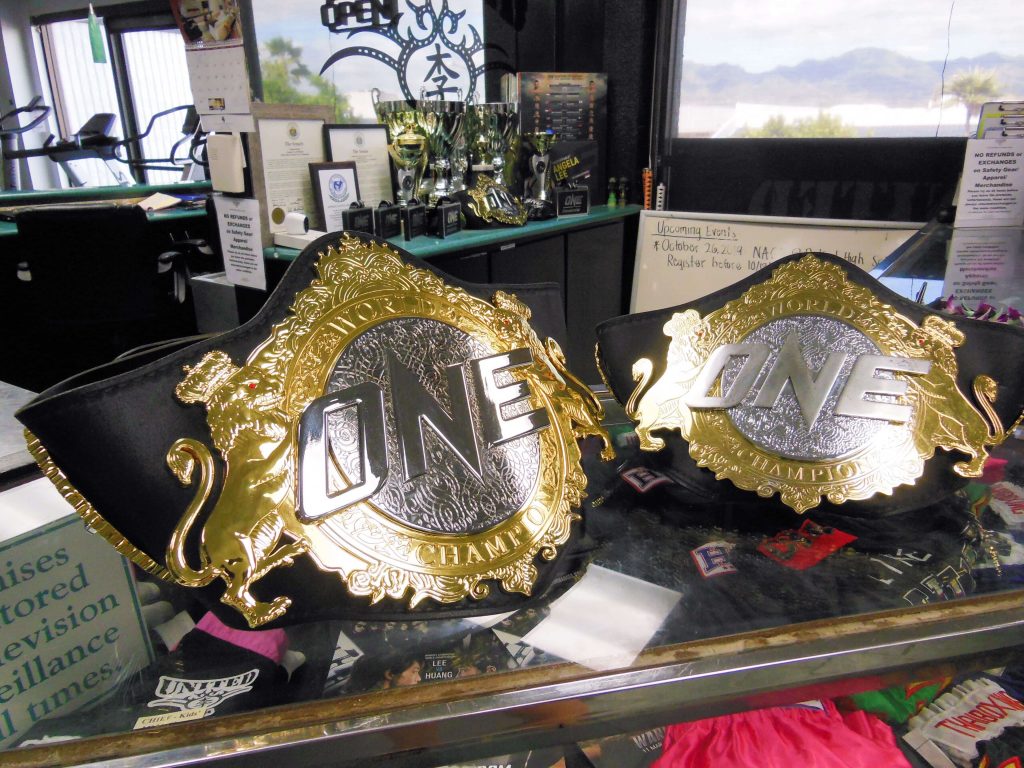 As I admired the Lees’ accomplishments, Christian couldn’t help but gush about his older sister Angela’s successes as ONE Women’s Atomweight World Champion.

“Angela left home at a very young age, at 18 years old she moved to Singapore, she lived there for a full year by herself, training and doing everything on her own straight after high school,” he said as he proudly watched her train in the opposite corner of the gym.

The two siblings became the youngest MMA world champions in history and the first sibling duo to win MMA world championship titles. Undoubtedly, MMA has been in their blood from the moment they were born. While he is able to enjoy his prestigious title now, Christian admits that the Lee siblings could not have come this far without making many sacrifices in their lives.

It feels so good to be home. Back in the gym and reunited with the champ. 2 Golds on #TeamLEE

“We were always kept busy and at the time you just want time to really do nothing, just be a kid,” he recalled. “But what I’m seeing now, looking back, is that it really helped us become the people that we are today.

“All that time we could have just been wasted away but we learned so much over the years just from being on the mats and being in the gym that we didn’t even really realize until now looking back at it.”

Christian was only 17 when he began fighting professionally, putting him in the difficult position of having to juggle schoolwork and training. While he successfully graduated in the end, his time on the school campus was limited due to his strict professional schedules.

“I would have to go out to Singapore to do training camps and fly out every few months to fight. I fought five times all before I graduated so I was very busy traveling back and forth. Thankfully I was able to manage it and I did graduate but it was a bit tough,” he said.

It was refreshing to see Christian, at just 21 years old, setting such a high standard for young boys to aspire to. He was physically strong, yet emotionally soft and sharp. He is able to simultaneously break emasculating stereotypes surrounding Asian men while also smashing the image of toxic masculinity surrounding fighting culture and MMA.

“I’m actually very proud to be able to be a role model to the younger kids out there, something that I really enjoy doing is teaching all these young kids and young teens and adults and watching them grow,” he explained. “They first come in shy and very scared of everything and after just a few classes, they become so vibrant and confident and I love being able to see that.”

As for himself, Christian admits he grew up never idolizing another fighter. “I’d say the only person I‘d look up to is my dad, he really taught me everything I know,” he said.

After every question, I noticed the conversation coming back to the topic of Christian’s family. While MMA is a sport that pits two people against each other, it was also the glue holding the Lee family together.

There were no signs of sibling rivalries between Christian and Angela, just endless love and support, almost as if his family’s achievements brought him more joy than his own.

My family is everything to me, without them I would be nothing. I owe my success to everyone in this photo.

“This gym is built around my family, my parents started it and my sister and I are continuing it on,” he said looking around. Despite being international MMA stars, their family’s gym had a very personal touch to all of their classes, with the entire family getting involved in teaching both the young children and the adults.

“On a regular day you’ll see my mom and my fiancée downstairs teaching the little kids, and myself, Angela and Bruno her husband will be upstairs teaching both adults and children,” he said.

In fact, it was MMA that brought him and his fiancée together.

“Christian and I, we met in high school, we were both on the high school wrestling team and we actually met through mutual friends and ever since then we’ve been inseparable,” Christian’s fiancée, Katie Guzman, told me.

“If we didn’t wrestle, we probably wouldn’t have ever met. It’s definitely brought us closer because Christian actually coaches me, he teaches me a lot of things every day so it’s definitely made our bond stronger.”

Despite what outsiders may assume, Christian assured me that training in MMA created no tensions between the athletes involved.

“It’s great to see everyone from Hawaii, they really love fighting and martial arts whether it’s wrestling, boxing, MMA,” he continued. “They just love to fight and work hard but after there are no bad vibes, we just shake hands say ‘thanks for the training’ and go our separate ways after that.”

Unsurprisingly, beginning a professional career in MMA at such a young age has taken a toll on Christian’s body. “Since I started fighting young I’ll probably look to retire a bit earlier than the average fighter,” he revealed. However, the young fighter has no plans on slowing down any time soon.

“Currently I’m waiting on the winner of the lightweight Grand Prix, so either Eddie Alvarez or Saygid Arslanaliev,” he told me.

“The winner of that will fight me for my lightweight role title which will probably be some time next year and in the meantime, I’m looking to get another fight in, possibly for another belt. So we’re just waiting to see.”