A 5-year-old boy in eastern China suffered a bruised and swollen face after being slapped by the father of his kindergarten classmate over the weekend.

A 5-year-old boy in eastern China suffered a bruised and swollen face after being slapped by the father of his kindergarten classmate over the weekend.

The incident, which was caught in a now-viral video, occurred in the boy’s home in Nanjing on Saturday, according to local reports.

According to police, the classmate’s 33-year-old father, identified only as Lu, went to the boy’s home to demand an apology after hearing that the boy had hit his son at school earlier in the day.

Later in the conversation, however, Lu slapped the boy in the face, sending him flying off his stool and onto the floor.

The violent moment shook the boy’s 64-year-old grandfather, identified only as Zu, who tried to defend the boy. The senior raised the chair he was sitting on in an alleged attempt to hit Lu.

In response, Lu shoved Zu to the floor. The impact broke the senior’s leg, which then required medical treatment.

The boy’s family reported the incident to the authorities. The following day, Lu was detained on a charge of assault.

An investigation revealed that the kindergarten feud started when the boys fought over a toy in the playground. Zu’s grandson allegedly scratched the back of the head of Lu’s son with the toy, resulting in a cut. 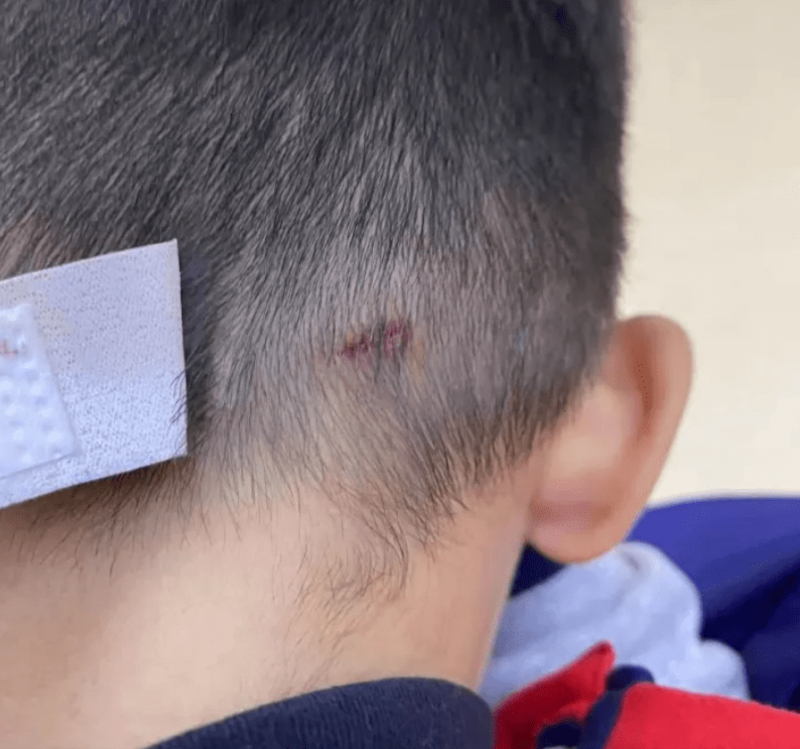 Lu’s son sustained a cut in the fight over a toy with Zu’s grandson. Image via Sohu News

The mother of Zu’s grandson reportedly intended on making her child apologize to Lu’s son later that evening. Both families reportedly live in the same community.

The incident has since gone viral on Chinese social media, racking up over 400 million views on Weibo alone. Several social media users condemned Lu, who was reported to be a doctor.

The incident remains under investigation.