Mac first made his intentions known last week via a YouTube live stream in which he mentioned that his efforts to create music are not reciprocated enough.

He expressed his frustration over the lack of support he receives despite his large social media following.

He noted how viewers respond more to him when he’s doing something controversial, such as cursing others and calling people out.

“What do you all really want from me? Do I even have the capacity to give you all I want?” he asked.

He then revealed that in addition to not releasing any new music, he will also stop making videos for his YouTube series “Mac Eats” since it doesn’t make enough money to support the people he must pay to make the videos.

Over the weekend, Mac shared the announcement with his Instagram followers through a separate emotional video. He expressed sadness about not being able to continue something he loved doing.

“I’ve been suffering for a while with this music s***,” Mac confessed. “I’ve been just going with my heart, and not really going with my brain. The s*** isn’t just working out.”

“Mac is frustrated that he is not getting the support he deserves from the industry nor the people. He works so hard and he is not seeing a return on investment,” she noted.

He has transformed the “They Can’t Burn Us All” rallying cry into a national protest for “unity amongst all people against hate crimes and racism.”

Fans and followers showed their support by commenting that Mac should not give up. 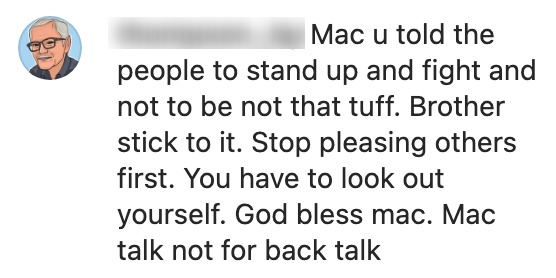