BTS Fans Got a Realtor Fired Because of a Racist Tweet

BTS fans, affectionately known as ARMY, managed to get a real estate agent fired from his job over a racist tweet this week.

The massive backlash all started following the K-pop group’s performance of “Boy With Luv” on “Saturday Night Live,” when Variety TV editor Brian Steinberg tweeted, “If any of these kids are actually singing I’ll eat the backstage llama.”

Steinberg’s tweet, which has since been deleted, drew scathing replies from ARMYs who defended BTS and each member’s unique talents.

However, one comment that sided with Steinberg stood out for its racist undertones.

“They look like kids. How old are they? Are Asian women even attracted to their own men?” 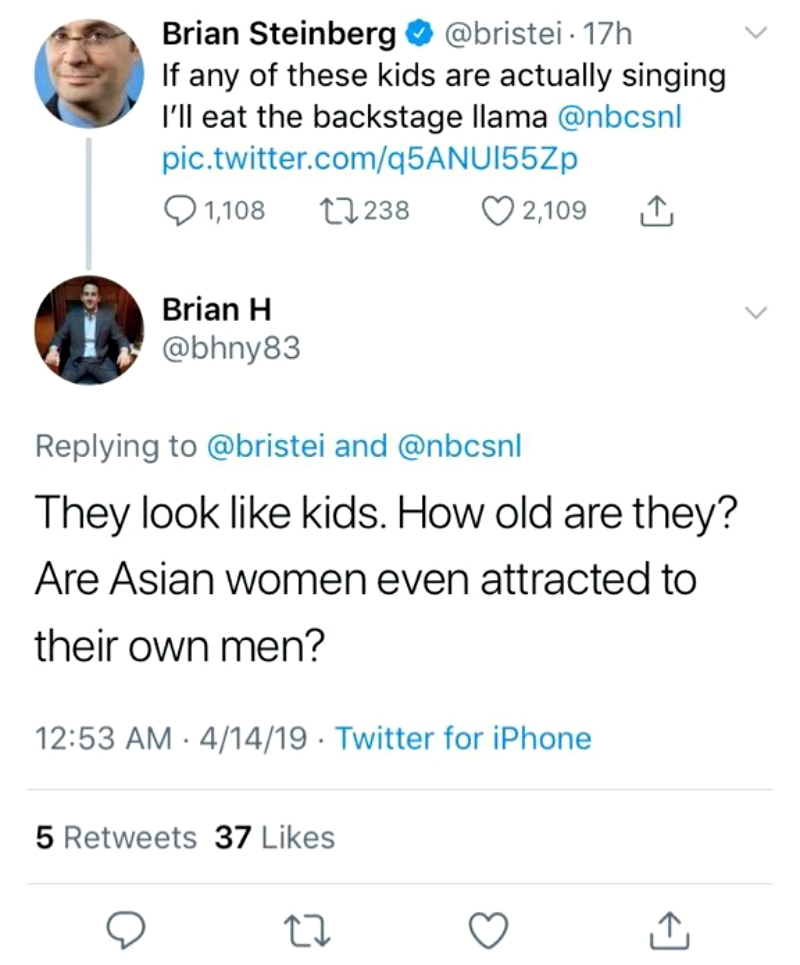 People immediately dug for Hughes’s information on the internet.

User @AsianRailroader found that he is affiliated with Highline Residential, a real estate firm in New York City. 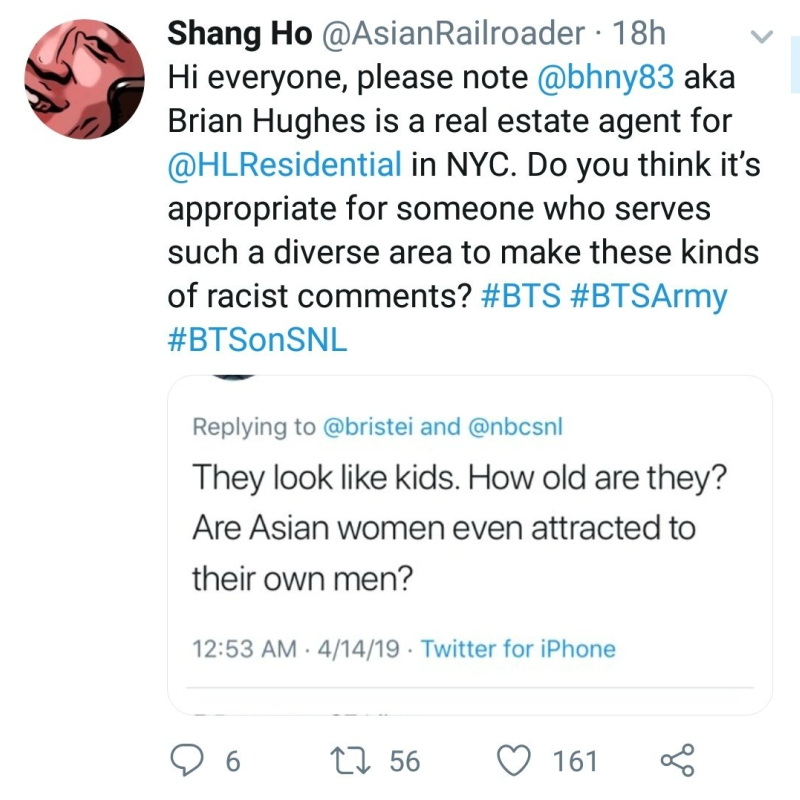 Shortly, user @taranya0 reached out to Highline Residential in an email, explaining that for someone working in such a diverse area, Hughes’s remarks must not be overlooked.

Yeah I mean there’s no room for racism towards anyone in 2019 pic.twitter.com/DGNTQHXYco

To the internet’s surprise, Highline Residential addressed concerns in no time, announcing that their relationship with Hughes had been terminated.

“We want to apologize to everyone for the inappropriate tweet sent by Brian Hughes. His comment does not at all reflect Highline’s values. We are proud to represent a diverse workforce and clientele. Our relationship with Brian has been terminated.”

We want to apologize to everyone for the inappropriate tweet sent by Brian Hughes. His comment does not at all reflect Highline’s values. We are proud to represent a diverse workforce and clientele. Our relationship with Brian has been terminated.

A quick check on Highland Residential’s website shows that Hughes, indeed, is gone.

ARMYs celebrated their victory for justice:

that brian dude got fired bc he was being racist against bts and called them kids and unattractive it’s a win pic.twitter.com/cWD78VEJ6f

he’s been terminated?? OMG that so sAd- pic.twitter.com/7NHqtLWK4A

but on a more serious note, thank you for taking this matter seriously and taking action! it’s very much appreciated.

Thank you so much for taking this matter seriously.. I hope he can reflect his action and not to be happen anymore in the future..

Meanwhile, people are still checking on Steinberg and his “llama.”

That brian dude who started talking about how he will eat llama if bts sings live literally worked at variety? On his bio.. I mentioned them.. nothing happened but glad he deleted the tweet..

I need stan twitter to report this stale bread Brian Steinberg to @Variety and @sallyannsalsano and point out what kind of person their senior journalist truly is. Also can someone ask him if he ate that llama yet ? pic.twitter.com/9pFojlcayN

So how about Brian, did he get fired too? He needs to take a whole llama as a gift

Clearly Brian Steinburg has terrible hearing, because you can tell that they were singing live. Maybe my sense of hearing is just more refined because of my background in music, but something tells me he’s gonna eat that llama!