Couple Sets Body-Building Goals to Get Ripped Before Their Wedding

Meet the body-building couple that set fitness goals together so that they would be in the ultimate shape for their wedding day. 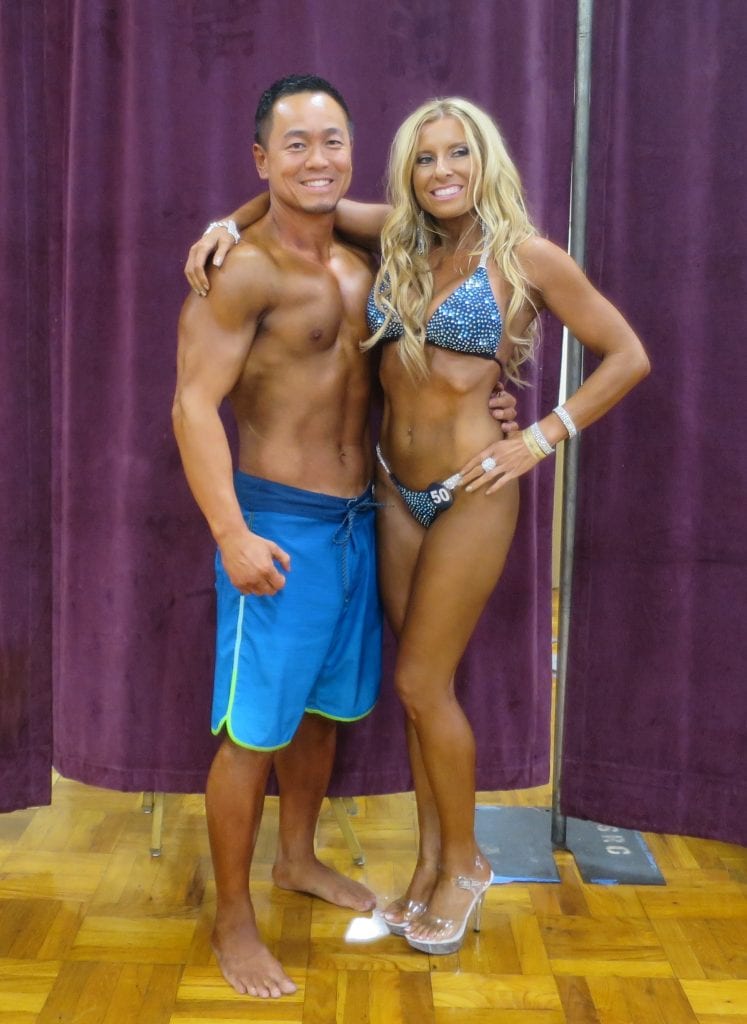 Melissa is a veteran transaction paralegal in big-law while Dennis has career-hopped from a wide range of titles, such as evolutionary biologist, SeaWorld educator, professional poker player, and is now studying to become a marriage and family therapist while promoting his dating coach services.

The two met on eHarmony back in 2011 and eventually got engaged on September 11, 2014. Like any couple, the pair wanted to get in shape for their big day, but they soon realized that framing their goal like that simply wasn’t enough. Instead of just going to the gym and hoping for the best, the two decided that training for a bodybuilding competition would be the key to shredding for their wedding. 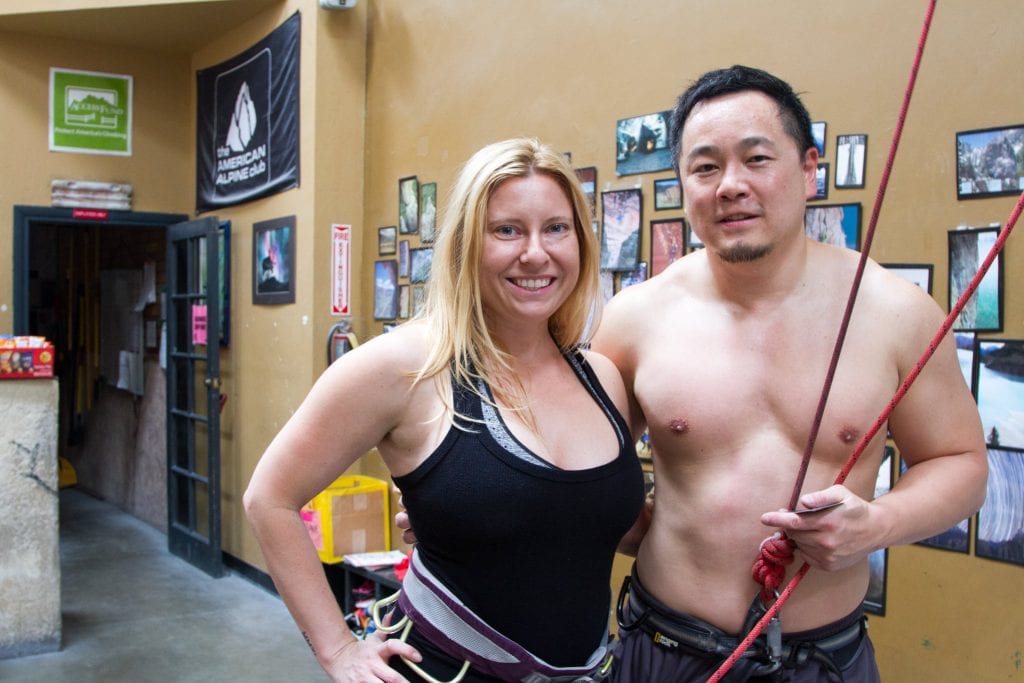 “When we started planning for our wedding and talked about getting in shape, the idea just came up,” Dennis said in an emailed statement to NextShark.

“We were randomly sitting at a bar on a Friday night, chatting about a friend who had just finished competing at that point. Melissa mentioned that she was considering doing a competition, too. I looked over and said, ‘Funny, I’ve been kind of thinking the same thing.'”

“The problem for me is that I’ve never been great at following through when it comes to diet and exercise. However, knowing that if I entered this bikini competition (‘bikini’ is the division I competed in), I would have to be on a stage. In front of a large crowd. Wearing almost nothing. That is what made me stick with the follow through.”

“And that’s how we decided,” Dennis added. “Over cocktails, ironically enough.” 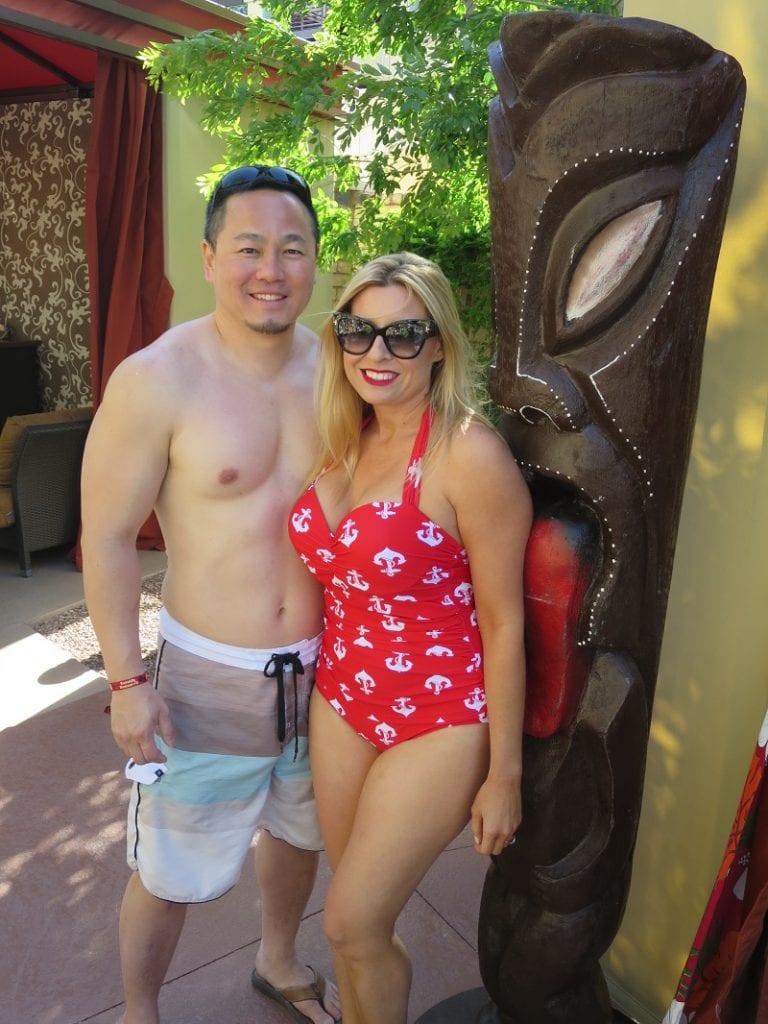 So, after reaching out to their bodybuilding friend and learning all they could, Dennis and Melissa dove straight into the rigorous regimen required of them. Enrolling in Body University and enlisting the help of a personal trainer and a nutritionist, the lovebirds gave their all into getting competition-ready.

“We both exercise regularly, so we were already in decent shape before we made the decision to do this,” said Dennis of their state before embarking on their fitness journey.

“I mean, we no doubt ate and drank more than we should have, and we probably had a layer of fat appropriate enough for wintering in if we were bears, but we had both been going to the gym, so it wasn’t a huge turnaround. She ended up doing a five-month prep, while I did a four-month prep. The length was determined by our nutritionist.”

The two would soon learn that bodybuilding was more than just hitting the gym and lifting weights — diet would play a key component in their success in the form of monitoring, refining, and limiting their calories. 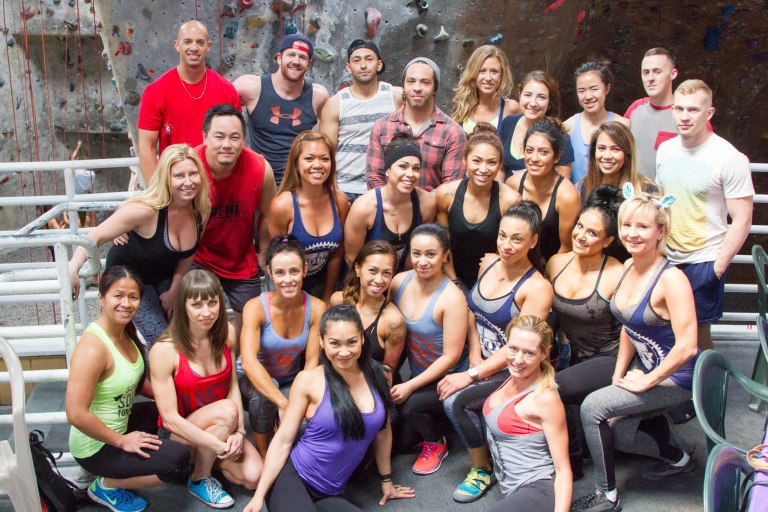 “Our coach had us follow the If It Fits Your Macros guidelines (IIFYM). With IIFYM, you essentially calculate and track your calorie intake throughout the day. Not really having used a diet plan before, I had a lot to learn (and measure, and weigh, and calculate), and spent a lot of time on the internet reading about IIFYM.”

Although the gym sessions were certainly no walk in the park, it was changing their eating habits that would prove to be the real challenge. “Nutrition was by far the hardest part,” Dennis said. “For four months (five months for Melissa), we had to take in a precise number of grams of carbohydrates, protein, and fat every single day. We’d meet with our nutritionist once a week, who would gauge our progress and then adjust our diet accordingly. This meant that we had to study the food label and weigh out every single piece food we ate, down to the ounce. No food label? Couldn’t eat it. This meant that we couldn’t go out to eat at most restaurants.”

The effects of their diet and exercise weren’t just felt in their waistlines; their entire lifestyle evolved to ensure their goals were met.

“We also realized how much of our social lives revolved around eating and drinking,” Dennis reflected of their lives before the challenge. “And when that was taken out of the equation, we found ourselves having a difficult time even hanging out with friends. Like, someone would randomly call us to say that they were going out to lunch, and we’d have to say, ‘nope, can’t do it.’ Or we’d try and meet people out for drinks, ordering water all night, and that would just be excruciating. Towards the end, we couldn’t even have calorie-free soda or caffeine. Ugh.

“We turned into hermits,” Dennis continued. “We just hung out at home, measuring and weighing our food, going to the gym, and basically not having a social life. Melissa and I are actually really good at hanging out together, just the two of us, without feeling the need to hit up our friends. That always seemed to be a good sign for our relationship, and it definitely helped us get through the prepping. We had different foods we had to eat, as well as different workout schedules, but at least we could sit in the same room and do something separately, together.”

All that training finally paid off; although they didn’t win their competitions, they were proud of the results they’d achieved — just in time for their wedding. 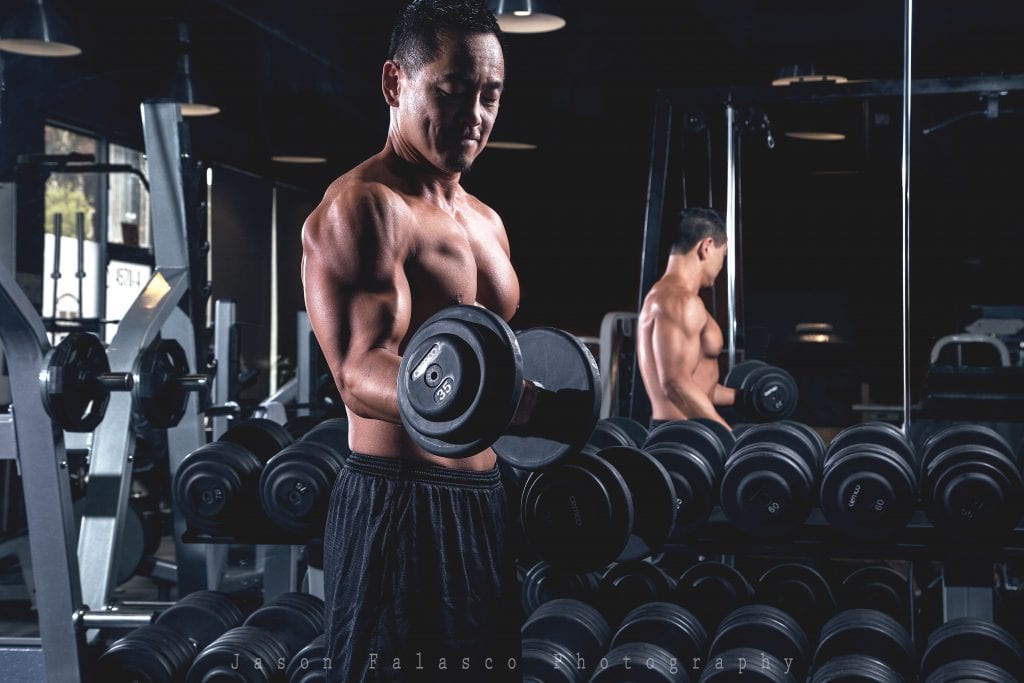 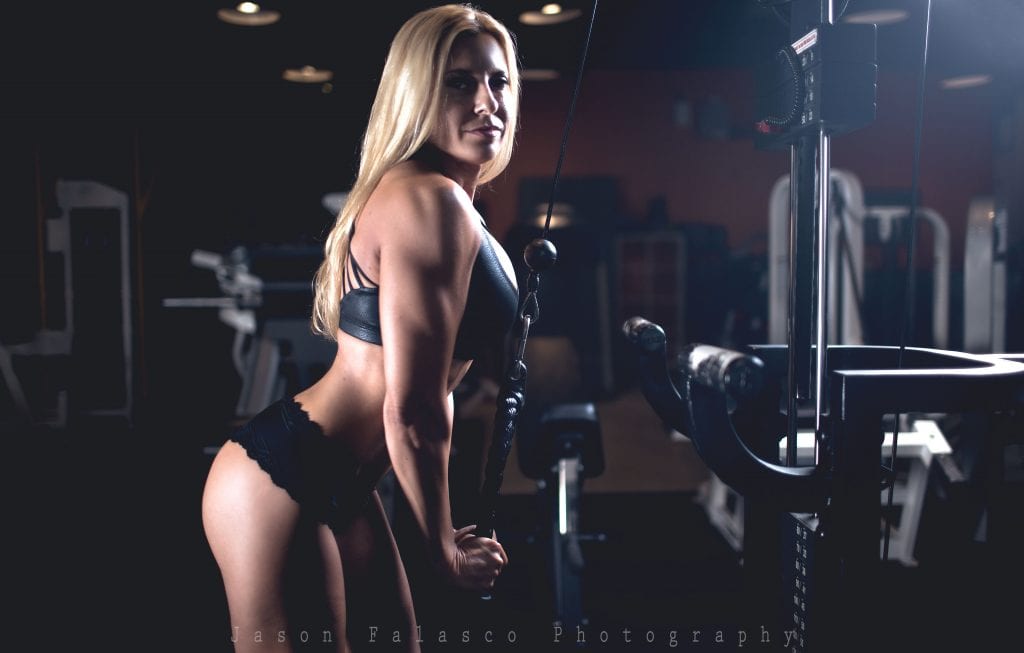 “There was one big snafu, though,” Dennis said of their big day. “The competition was exactly four weeks before our wedding. By competition time, we had both shed over 20 pounds and were pretty much rail-thin. It’s a well-known fact that after competition, you tend to ‘blow up’. Since your body is so deprived of fat stores at that point, pretty much everything you eat gets tucked way. That means that when we were getting fitted for our wedding outfits, we had to leave ourselves plenty of room to grow back into them.

“Her dress and my suit worked out just fine, fortunately, and they fit great once the wedding day rolled around. However, I grossly underestimated how much even my fingers would change in size.”

The sad, hilarious consequence of their accidental oversight were caught on film so they could cherish — and chuckle at — it for the rest of their lives.

When asked if they would recommend this method of getting fit for a wedding to others, Dennis remains on the fence:

“Planning a wedding is stressful enough as it is. Laying a bodybuilding competition over that definitely didn’t help our stress.

“At the same time, the fact that we got through it without ever wanting to kill each other was a good sign for us. If another couple were to ask about doing this, my suggestion would be to plan for the competition to occur two or three months before the wedding. Definitely don’t do the competition less than a month from the wedding.

“Either way, I’d liken the competition prep process to a ‘trial by fire’ for us, as far as seeing whether or not we’re meant for each other. 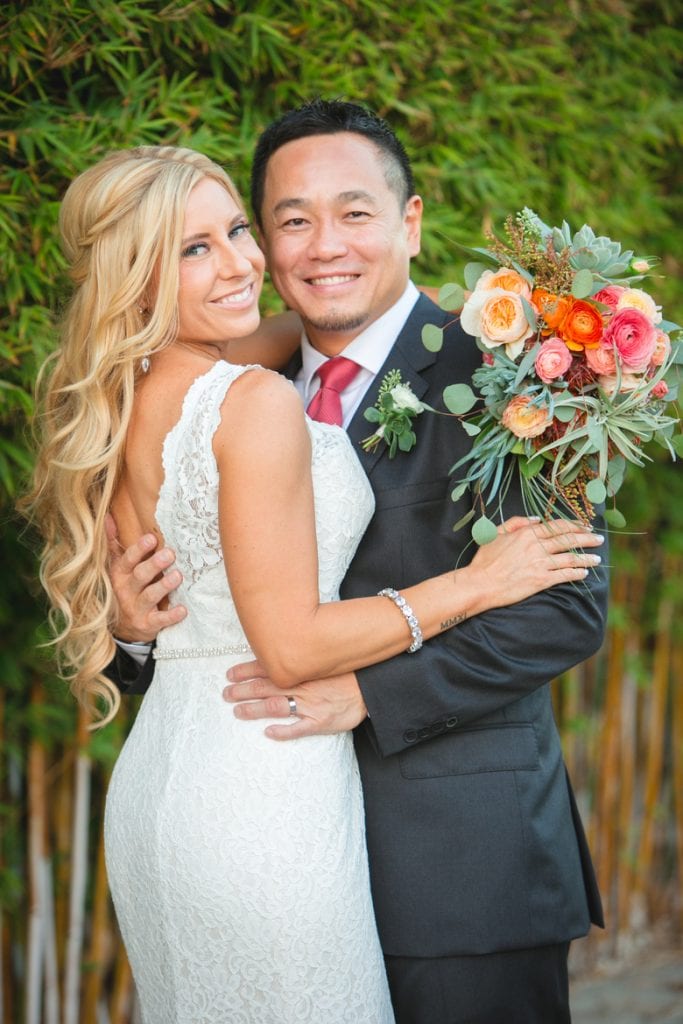 What do you think? Would you try shredding for your wedding like this? Would your relationship survive the challenge? Let us know in the comments!

Dennis has just launched a dating coach service, with a focus on developing social savvy first, rather than offering generic dating advice. Being Asian-American comes with its share of social challenges, and Dennis draws from both his personal experiences and professional background to teach you how to overcome all those eyeroll-inducing stereotypes. Check out Social Savvy Sage here.