A group of researchers published a study that recently went viral last week for judging young doctors’ professionalism based on their social media posts.

Sexist study: On December 24, 2019, the study was published behind a paywall in the Journal of Vascular Surgery and looked at the social media accounts of 480 recent vascular-surgery graduates from 2016 to 2018.

Public reaction:  When the study became free to view last week and was recently promoted on social media, it caught the attention and disapproval of many. The hashtag #MedBikini started trending on both Twitter and Instagram with medical professionals posting photos in their swimwear and showing their support for fellow “unprofessional” medical professionals. 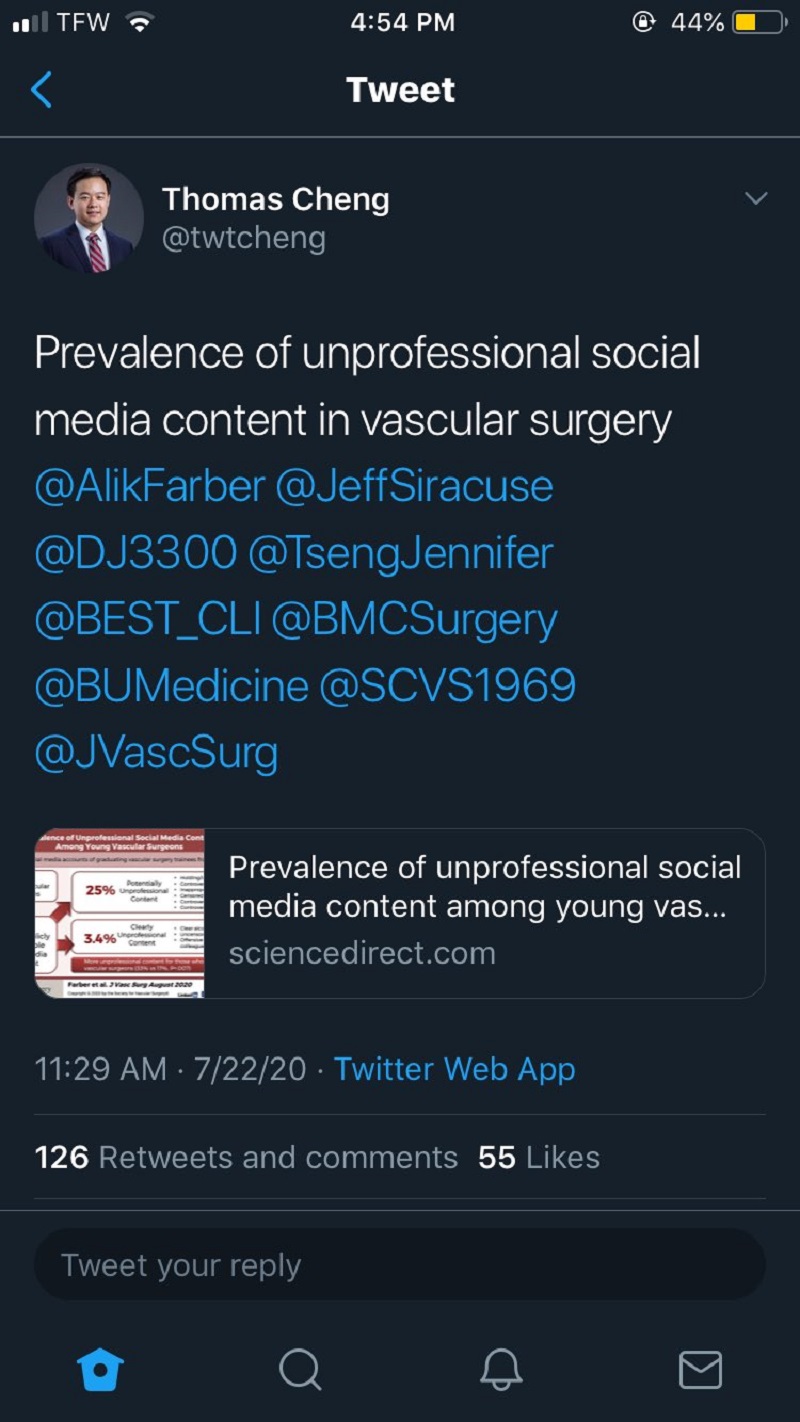 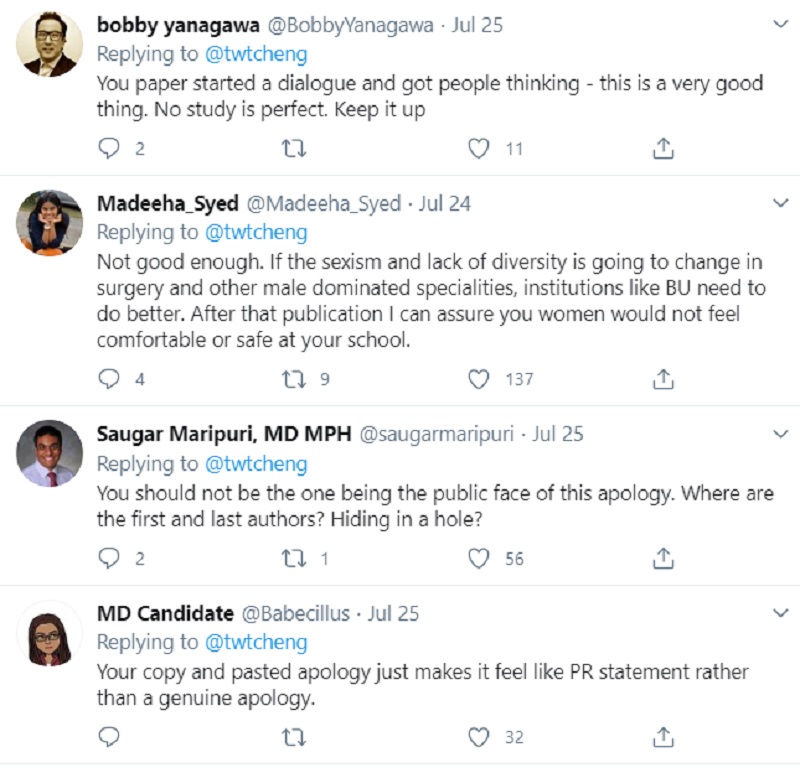 Instead of tagging the flaming garbage paper that’s inspiring the hashtag – here’s some actual examples of unprofessional behaviour https://t.co/VQoblqfuWQ @allison_rants

Just in case you thought me wearing a bikini has anything to do with how good or “professional” of a #nurse I am #medbikini 👙. As you’ve probably heard by now, yesterday a study was published in the Journal of Vascular Surgery where some male doctors took it upon themselves to become the social media police and go through other surgeons accounts to deem whether it was “professional” by their standards. They determined that wearing a bikini an “inappropriate outfit” and holding alcohol in a photo was also a big red flag.. along with so many other comical statements. Overall the study is a piece of trash. Not sure who gave them permission to determine what is and is not appropriate for a woman’s body. Swipe to see the study 🤣.

Also deemed unprofessional, profanity & political talk but these dudes can fuck off b/c health care should be free at the point of care. https://t.co/Lk99jCRdrD

Just found out you can't be medical student AND wear take pictures in a swim suit. Maybe someday women will be able to be doctors AND go to the beach 🤔 #medbikini pic.twitter.com/LTePAYCMiU

A woman can have beauty and brains. She can be smart and sexy. She can be fun and hardworking. She can wear what she wants. She can be ANYTHING she wants to be❤️ Standing with my fellow female healthcare professionals today. Stay empowered, babes🙌 #medbikini

I’m a cardiologist standing in solidarity with female vascular surgeons today. NEWSFLASH: FEMALE DOCTORS CAN WEAR WHATEVER THEY WANT. ⁣ Female doctors, nurses, NPs/PAs, all healthcare professionals - we can wear a bikini, a dress, or we can wear scrubs. This does not change how good we are at being a healthcare provider. We can wear WHATEVER we want on our free time, and still save your life. Sexism in medicine is alive and well. But we won’t let that stop us. In this ridiculous article making its rounds on social media, the vascular surgery authors sought out to determine how many vascular surgeons had participated in what they state is “inappropriate social media behavior”, which they defined as photos in BIKINIS - BUT ?? NOT MEN IN BATHING SUITS. Other topics considered “inappropriate” were Halloween costumes, GUN CONTROL and politics. The “study” was written by 3 men who created fake social media accounts to spy on applicants. Is this a joke? Women in medicine: whether you’re a nurse, medical student, resident, an attending, post your favorite bikini pic/dress pic/halloween pic/anything today and tag me, hashtag #medbikini . We have to drown out the sexism in medicine and keep it moving. It’s 2020 people. Sexism is cancelled.*******UPDATE******* July 24th 6:54 pm EST — this study is OFFICIALLY RETRACTED!! 👏👏 see the statement from the journal in my stories

SHE CAN BE BOTH 👩🏻‍⚕️👙💪🏼 Because my intelligence and ability to be a good future doctor is not defined by what I wear outside of work/school. P.S Im aware that the article posted in the Journal of Vascular Surgery has been retracted but the fact that it was published in the first place shows how male physicians feel threatened by female physicians success that they try to undermine it by shaming us. There’s no excuse for the behavior of those involved in the article. #womenempowerment #medbikini #medicalstudent #ms2 #womenempowerment #womeninmedicine #latina #latinainmedicine #feminism #feminist #equalityforall #equality #genderequality #premed #futuredoctor #futuresurgeon

A woman can be a DOCTOR and she can wear ANYTHING she wants! My friend @ashleyypelaez_ said it best "what we wear outside does not change the fact that we are competent, highly trained, and committed to helping our patients achieve optimal wellness." Standing with my fellow healthcare professionals today in #medbikini. Thanks to @daniellebelardomd for bringing awareness to the horrible study published on women in social media and medicine. Let's end the double standard! #realheroes9 #medical #medico #medicine #mbbs #studymotivation #neetpg #fmge #usmle #medicos #neet #mci #exams #doctors #doctorslife #aiims #doc #medicalschool #medschool #medbikini #anatomy #shoutout #shoutoutforshoutout #realheroes

Thank you SOOOOO much for the overwhelming comments of kindness, love, & support for WOMEN in MEDICINE 👩🏿‍⚕️👩🏻‍⚕️👩🏽‍⚕️👩🏼‍⚕️👩🏾‍⚕️! I chose to speak up for a cause that I believe in after having experienced so much sexism in medicine; starting in medical school & throughout my 20 years working in Emergency Medicine 💉 Just two days ago I had 300 followers. You never know what sort of positive impact you can make by speaking up & expressing your thoughts! But, this is not about me. This is about the advocacy of women’s rights on the basis of the equality of sexes. This is about showing support for marginalized voices and fighting for equality. We are all speaking up for the unequal treatment of women in medicine. Get out & vote, listen to scientists, & be proud of your voice! “You can not be afraid to speak up and speak out for what you believe. You have to have courage, raw courage.” ~John Lewis. I will continue to use this platform to be inspired by all of you, share my ER stories, & spread positive awareness! 🖤 xo Dr. Bikini 👙 #medbikini #womensupportingwomen #challengeaccepted @lizzymitchermd @room53c @kprimacio In the spirit of supporting women, I challenge you to follow @sustainabergie where she gives tips and tricks to live sustainably! ♻️♻️♻️♻️♻️♻️♻️♻️♻️♻️♻️♻️♻️♻️

This is the most badass #MedBikini post I’ve read and I’m sorry if Dr. Candice Myhre is on twitter and shared this. But I think we all need to see and read it. Wearing a bikini did not take away from her duties as a doctor. It didn’t hurt her pt. It actually saved their life. pic.twitter.com/rze0afLksT

Researchers apologize: Dr. Jeff Siracuse, one of the authors of the study, apologized for the “paper's framing” and noted that their intention was to “empower surgeons." His Twitter account appears to have been deleted or deactivated as of this writing. Senior author and vascular surgeon, Alik Farber, apologized in a tweet on Sunday.

As the senior author of the manuscript entitled “Prevalence of unprofessional social media content among young vascular surgeons” I want to personally apologize to everyone for the pain and negative impact that this paper has caused to so many people.