‘Avatar: The Last Airbender’ Creators Walk Out of Netflix’s Live-Action Remake and Now All Hope is Lost

Fans of the beloved animated series “Avatar: The Last Airbender” were distraught and baffled when the creators announced on Wednesday that they left its imminent Netflix live-action reboot.

The Great Divide: News of Michael DiMartino and Bryan Konietzko’s departure came when the former showrunners posted on social media that they made the decision to leave in June. In 2018, Netflix brought the duo on board as executive producers. The streaming giant said it would honor DiMartino and Konietzko’s vision, but the rift resulted in that difference in direction.

Well, friends… there you have it. Big sigh. 💔⬇️💔 I’m sure many of you will understandably want to know more and will ask me questions in the comments, here and on subsequent posts and live-streams and in-person encounters and everywhere else ad infinitum. I wish I could explain things in greater detail, but the above statement is really all I can say about the matter so I won’t be answering any of those. I encourage you to head over to my partner Michael DiMartino’s account to get his take on our departure too: @mike_dante_d Thank you from the bottom of my heart to all of the Avatar: The Last Airbender fans, and I’m sorry our involvement in the live-action project did not work out. Time to get on with my life. Onward and upward. 💙 Love, Bryan #avatarthelastairbender #cocreators #michaeldimatino #bryankonietzko #bryke #atla #liveactionseries #netflix

The Darkest Day: When Netflix added the original “Avatar: The Last Airbender” to its roster, the animated series took the platform by storm. Becoming more accessible to longtime and new fans, and remaining in the top ten for weeks.  Especially since the show comes from a heavily pan-Asian background, drawing from Asian history and “Japanese, Chinese, Indian, and Inuit aesthetics,” according to SyfyWire; now, with the creators vanishing, there are looming fears of the live-action series turning into another M. Night Shyamalan “The Last Airbender” disaster.

The Live Action ATLA: My name is Adam, and I’m the Avatar! pic.twitter.com/xGct3dAzW7

now that bryke’s gone netflix is probably gonna ruin the atla live action and/or whitewash everyone ,, go gurl give us nothing

After that shit movie adaptation, I don’t trust anyone else with the story of Avatar The Last Airbender if it’s not the creators themselves. So kindly abort the mission @netflix 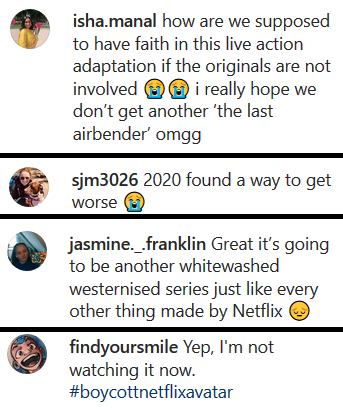 Uncle Iroh wisdom: Although Netflix’s ambition to create live-action remakes may be more persistent than the fire nation, DiMartino offered some hope. The “renewed” wave of “interest and excitement” in “Avatar: The Last Airbender” and its sequel series “The Legend of Korra,” have been inspiring to him. Like the Air Nomads, he thought it would be best to detach himself from this adaptation, but this does not mean the end for his involvement in the Avatar universe and lore.