An Asian woman took to TikTok after a restaurant allegedly put her and her friends in what she described as the “POC (person of color) section” of the restaurant.

TikTok user Maggie (@sadgirlmaggie) shared her personal experience in a now-viral video post on Feb. 14 showing how she and her Indian and Argentinian friends were seated near the entrance of the restaurant’s restroom.

@sadgirlmaggie If you don’t know, sometimes restaurants seat ppl of color in the back near the restrooms because we’re less likely to have a problem with it and it looks better for the restaurant from the outside. I do not tolerate this shit and they need to be called out #poc ♬ original sound – Maggie

“If you don’t know, sometimes restaurants seat ppl [sic] of color in the back near the restrooms because we’re less likely to have a problem with it and it looks better for the restaurant from the outside,” the TikTok user, who has more than 17,000 followers, wrote in her video’s caption. “I do not tolerate this sh*t and they need to be called out.”

Maggie wrote in a follow-up comment that said she was only sharing her experience and clarified that she’s “not saying this happens at all restaurants.” She also said that she and her friends walked into the allegedly empty restaurant and were asked to sit at the back.

“The restaurant filled up while we ate and it was pretty obvious… because it’s not only our table,” she wrote. “Again this is subjective.”

Some users found the post to be relatable and even shared their own experiences with other restaurants.

“Happened at Starbucks, I would be sent to take the cafe orders for POC… the shift managers did not hide what they were doing either,” one user shared, while another said the same thing happened to them at a Cheesecake Factory.

“I didn’t even realize this was happening to me and now I’m sad,” another said. 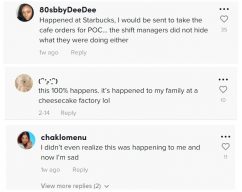 Other users who have worked in the food and beverage service industry also chimed in. One user, who said that they previously worked in New York City as a hostess, agreed that this occurs in certain places.

“This does happen especially at ‘exclusive NYC spots’ or ‘certain trendy lounges’ they even tell hostesses to sit unattractive people in the back,” she wrote.

“I work in a restaurant and they do this,” another user said.  “It makes me so mad, I try to tell them to stop. I want someone to take a pic and sue.” 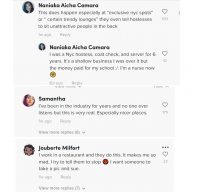